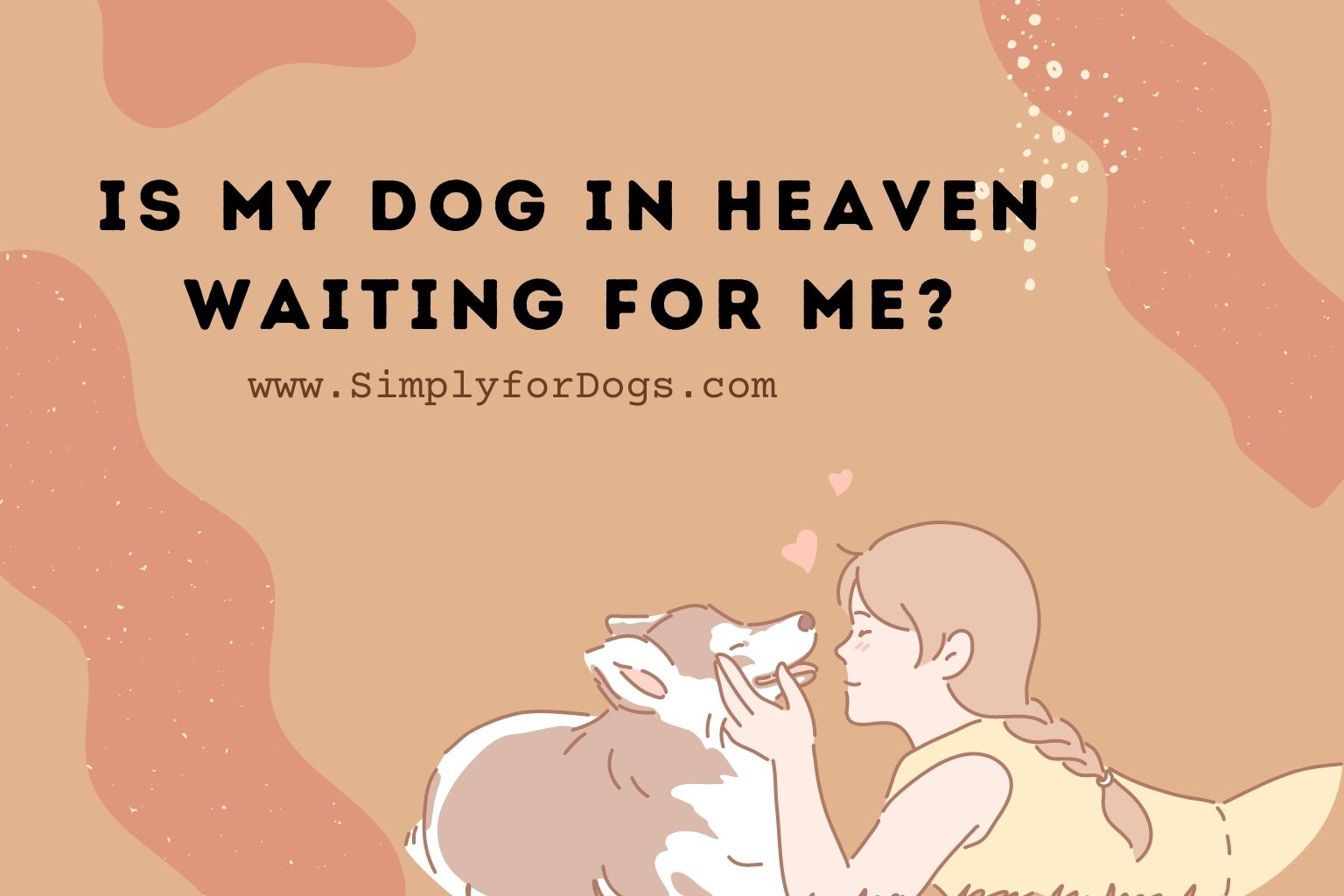 One of the most heart-breaking things in life is when a beloved pet has passed away. However, it gives pet parents hope to believe that their animal is in heaven waiting for them. While we can’t say for sure that dogs are waiting in heaven, there is a religious and spiritual belief that dogs and other animals are waiting for their owners in their eternal life.

It is believed that departed pets may also send the signs of their loved ones that they are still there. So if your pet has crossed the rainbow bridge, you may have sensed their presence at times, whether it’s a noise or the feeling that they are there in the room with you.

On this page, we’re going to discuss what is believed about departed pets in the afterlife. When their souls pass to a different dimension, they don’t forget about their owners. If you believe there is a plan for all of God’s creatures, then you could see your dog when you go to heaven.

Will I See My Dog in Heaven?

There is a belief in several religions that dogs and all other animals go to heaven. Even if a person isn’t religious, it still brings them peace, believing that they will see their deceased loved ones in the afterlife. Animal lovers have the same feeling towards their pets.

Your dog is on Earth for what feels like a short time. During that time, humans and their dogs can form a loving bond unlike any other relationship in their lives. During its time on Earth, your dog is likely to become an important member of your family.

If you believe in a religion where spirits go to heaven or hell after passing, you may be familiar with the context that all animals go to heaven. This means that your dog is in heaven waiting with your other loved ones.

Will My Dog Be Reincarnated?

If your beloved dog has passed many months ago and you meet a puppy with similar personality traits, you may wonder if they have been reincarnated. According to the Bible, dogs are resurrected and descend to heaven.

While there are no straight answers to whether or not a dog will be reincarnated, it is believed to be possible but very rare. God will only reincarnate a dog if it has a specific purpose with the dog’s new life.

Will Dogs Waiting in Heaven Show Signs They are There?

According to afterlife experts, dogs and animals often visit their owners after death. Your furry friend may visit you at times, but you’ll only notice subtle signs.

The most common time a dog will visit their owner is at night when they are sleeping. During this time, your brain is in a different state, so it’s easier for the dog to visit at this point. When you’re asleep, your mind is in a REM state, which stands for rapid eye movement. Since you’re not deep into your own thoughts, your beloved dog can show up in your dreams.

A lot of people assume seeing a pet in their dreams after its death is just a dream. However, there is a strong spiritual belief that this is your dog visiting you.

When you wake up from one of these dreams, it may feel as though the time spent with your dog was real. Some people have experienced dreams where they are playing or cuddling with their dog just like they used to when it was living. This is just one example of how a dog may show signs they are still there.

Are There Other Ways Dogs Show Signs They Are Visiting From Heaven?

Sometimes pets send a sign to use in the form of living things. For example, have you ever been outside and noticed a butterfly or bird that has distinctly caught your attention? This won’t be any random creature; it will be one that you are sure to notice. Maybe a bright red cardinal or a colorful butterfly.

It is believed that this is a message from your dog. Your dog always loved having your attention, so they are likely to send you messages like this that will catch your attention.

Some people have noticed a feather floating after their pets die, while others see paw prints places they go. Animals are believed to be very creative with how they show signs to their pet parents. So if you notice a sign they are sending you; the animal is likely to send more.

How Will My Dog Let Me Know They’re Here?

Once an animal crosses the rainbow bridge, they are not done with their loved ones. There have been many stories where people heard or saw their dogs after they have died. After death, communication from animals happens more often than people realize.

If your dog is vocal, you may hear a noise that, for a moment, makes you feel as though they are still in your world. This isn’t always a bark; it could be the pitter-patter of their paws or scratching at the door. It may only be a brief sound, but it’s enough of a reminder to let you know your dog in heaven is still a part of your life.

Some people have sworn that they have seen a glimpse of their pet from the corner of their eyes. However, expert Karen Anderson believes that every pet has a unique way of showing their owner a sign that they are visiting from the other side.

Do All Dogs in Heaven Waiting Give a Sign?

Losing a pet is one of the most difficult things a person will go through in their life, so they may find comfort in the idea that their dog will send them a sign. While there have been many cases where people feel the presence of animals after death. This, unfortunately, doesn’t happen for everyone.

Some dogs are totally happy in heaven waiting while their owner lives their life. It is believed that their soul is in a place that resembles paradise, which is a safe place for the pets.

You are not wrong if you want a sign from your pet. Psychics believe that you do not harm the dogs in heaven by asking for a message. The power of belief is very strong, so if you pray to God for a message from your dog in heaven, you may receive one.

While a message for your dog in heaven may seem like a way to cope with grief, it’s important to remember that this can’t be guaranteed. However, it is seen as a great gift if you do receive one.

Is My Dog in Heaven?

Many children are familiar with the story All Dogs Go To Heaven. According to religious context, there is truth to this story. Dogs’ souls are pure and good, so they will ascend to heaven after dying. For peace of mind, a lot of pet parents want to know how they can know for sure that their pets are in heaven.

There is no set answer that can assure people that their pets are now in heaven waiting. However, if your religion believes in life after death in heaven, then there are some messages that your animals may be up there.

It’s likely that you will still think of your dog often after death. One clue that their soul is in a good place is if you read or see their name on something right after thinking about them. You may even smell something that reminds you of the dog.

There is also spiritual belief that pets can send telepathic signals to humans from heaven. If you randomly think about your beloved pet and smile, this means they are in a good place.

A pet’s love is forever, and death will not change that. Those who follow God’s words believe that love is eternal. Therefore, if you loved your dog unconditionally while they were living, and they loved you as well, then God will reunite the two of you.

You formed a bond with your dog while they were alive, and losing them to death does not change that. Love is one of the most powerful energies in the world, and it’s the essence of God. His plan is for everyone who has a loving bond to be reconnected in heaven.

Another belief is that a dog may send their spiritual energy in the form of another person or animal to help them cope with the grief of loss. This is because the person is able to pick up on that energy, and the dog believes it will comfort them. So even if the person isn’t aware that this is their departed pet’s spirit, they do pick up on a familiar presence.

Will I Get to Meet With My Dog in Heaven?

After you die, it is believed that you will meet your dog in heaven. This is because God had a purpose for every creature he created, and they are all a part of his ideal planet. Heaven is God’s kingdom, and many believe that he wants all the animals he created to be a part of it. This includes pets and wild animals.

In the bible, heaven was described as a place where all living creatures can be in harmony together. The lord created many animals to be a part of his Garden of Eden, which is why they are all welcome in heaven. No animal is excluded from this perfect place.

There were arguments that heaven was only for humans because they had a soul. However, many believe this is wrong because animals are compassionate and bring people joy. They have beautiful souls, and God welcomes them into heaven.

Some people believe that the dog they see in heaven may not be the same dog they knew on Earth. This is because the dog is living in a paradise where everything is in complete harmony. However, that doesn’t mean they won’t recognize you.

Before we wrap up, we want to share a story with you about a family who received signals from their dog Midnight after her death. Midnight was ill and passed away in 2014, leaving the couple that cared for her and her doggy friends behind. It was a sad household for nearly 2 months.

One night, the couple was in the living room with their 3 dogs when the husband decided to go make a sandwich in the kitchen. It was the evening, but he didn’t bother to turn the lights on because he knew his way around the kitchen. Unfortunately, one of the dogs had followed him in there and kept bumping into him.

However, when he went back to the living room, all 3 dogs were sitting peacefully with his wife. He was confused because he had physically felt the dog nudge him. However, his wife confirmed all 3 dogs had stayed in their spot.

There was another occasion when the wife heard Midnight’s football sounds in the hallway, but all 3 dogs were outside playing. She continued to hear this sound and also noticed a canine shadow. It wasn’t until they notice a distinct smell, that could only be Midnight’s odor, that they knew it was their departed dog giving them signals.

After a person’s dog has died, they find peace in knowing their dog has gone to heaven. However, a lot of people want to know if their dog is in heaven waiting for them. While nobody knows the answer 100 %, religious context and spiritual belief point to this being true.

If you believe that your dog is in heaven waiting, then you may be reconnected again when you die. Some dogs will even show signals to their owners that they are in a good place after death. The love from pets never dies, which is why many people still feel a connection to their dog after it has passed.