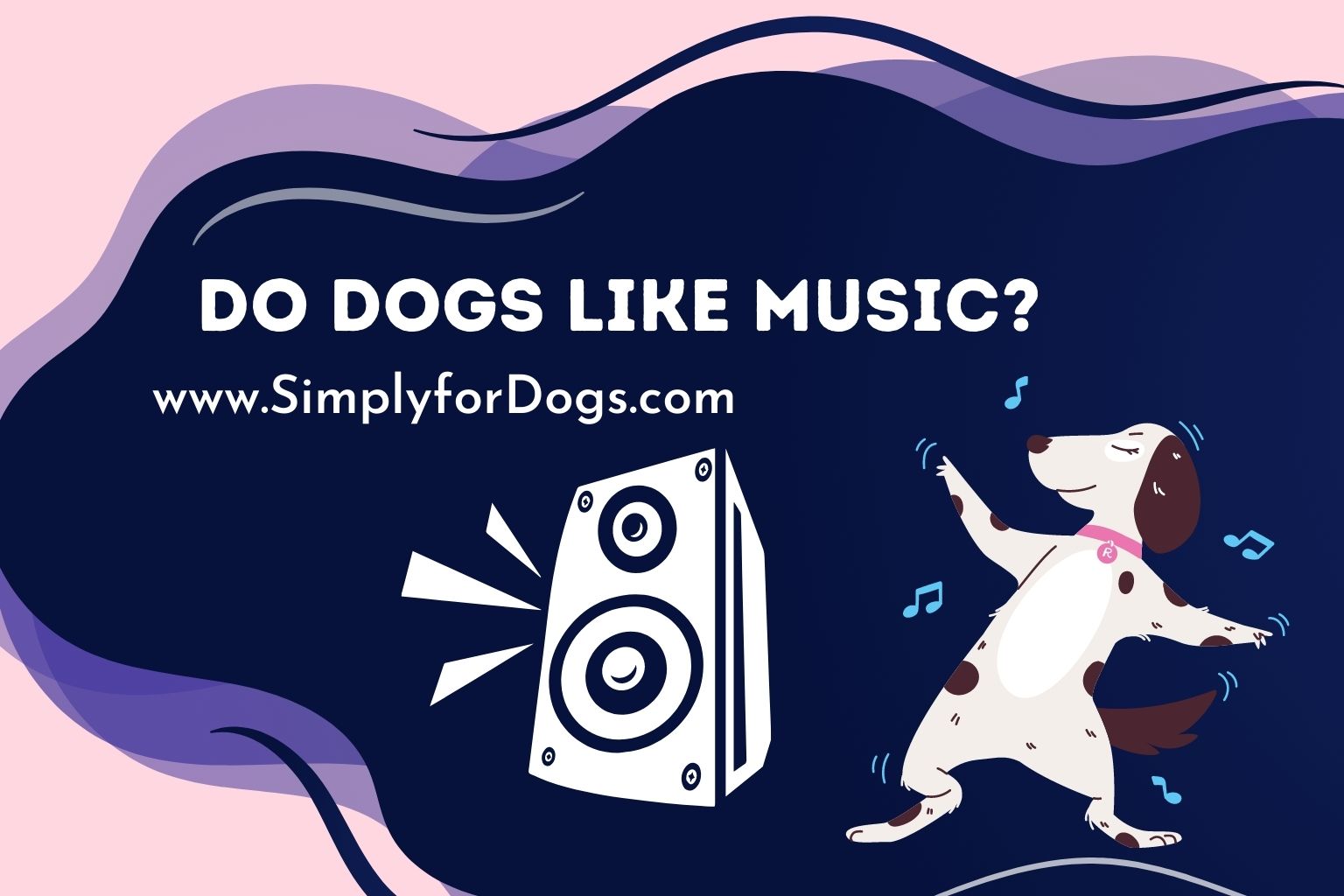 Hey, it’s Ash here again with another article out if left field. Recently one of my friends with a new puppy asked me a strange question. It seems that the puppy, an adorable Labradoodle who had been separated from his mother a bit too soon, was having trouble sleeping through the night. She recalled the way she had used soothing music to help her human child with this trouble a few years before, and was wondering “Do dogs like music?”

I had to admit that I had never looked into it. We’ve previously discussed if dogs like watching TV, but music? Janice and Leroy have certainly never complained about me playing the radio, but do they really enjoy it the same way humans do? And more importantly for this Labradoodle, can music help dogs relax or elicit other emotional reactions? So, I went digging for answers.

Not All Mammals Are Created Equal

The first interesting thing I learned was that dogs don’t have the same ability humans do to detect changes in pitch. In fact, the only mammal with a better ability to distinguish the musical scale of do-re-mi-fa-so-la-ti-do better than humans are bats. I certainly didn’t know that dogs’ hearing wasn’t as detailed a sense as our own.

My first reaction was that this fact would likely mean that dogs don’t appreciate music the way we do. After all, if they can’t easily distinguish between changes in pitch, can they even hear a song? But the more I read, the more I realized that the studies weren’t saying dogs can’t distinguish the scale – they just can’t hear the changes as readily as humans can.

One argument from many pet owners is that dogs must like music because they attempt to make it! Anyone who’s ever owned a “howler” will attest to the fact that if they start singing or playing music, their dog may often join in. Does this mean that dogs actually like music and try to make their own?

Actually, no. Howling in dogs is simply a method of communication. Dogs that are alone often can howl as a means of hopefully attracting some company. If nearby dogs hear the howling, their instinct is to join in as a way of letting a fellow canine know “hey, you’re not alone”. So, when your dog hears you singing or playing, their first instinct may be to join in with you to make sure you aren’t lonely.

Despite having a lesser ability than humans to detect changes in pitch, science does show that dogs can recognize certain pitches over others. Lonely howling generally starts with a high pitch noise, and then drops to a lower pitch for the main howl. One interesting thing to note is that when wolves howl, each wolf will consciously choose to be slightly off key from the other wolves – they want to be noticed in the “song”! So, when your dog hears you making a noise that starts high and drops lower, they may join in with a discordant sound, copying their wild ancestors. That’s pretty neat!

This is very similar to what goes on in the minds of humans. Humans have also shown reduced agitation, better sleep, and calmer moods when listening to classical music. And humans have also shown more signs of anxiety when listening to nothing but heavy metal music. This study was performed on 117 dogs back in 2012, but later studies from the past five years have shown the same results every time.

In another study performed in 2010, dogs didn’t seem to have any reaction one way or another to pop music.

9 Strategies for People Who are Too Busy for Their Dogs

Why Does This Matter?

The first reason that anyone would want to check out the impact music can have on dogs is probably something similar to my friend who started all this. Their dog is having trouble with anxiety or clinginess, and they want to offer them a way to self soothe. The studies support the idea that classical music would be one way to help an anxious dog calm down.

But there’s another very interesting reason for these studies that I found while reading. According to one study, playing classical music in over 1500 shelters across the country had a direct impact in the increase in adoptions. Here’s why:

Dogs that are in shelters tend to be very stressed out. They’ve often been rehomed more than once, they are away from whomever they consider to be their family, they don’t have much space for exercise, they aren’t on the best diet, they may be in poor health, and they are surrounded by other dogs all feeling the same exact things. This is the perfect storm for a bunch of stressed out dogs.

When a person walks into a shelter and sees a bunch of anxious dogs pacing, howling, barking, or being destructive, they often want to turn around and leave. They don’t realize that once away from this environment and with a little time to build trust, the dogs will likely calm down.

But these 1500 shelters that began playing classical music noted a significant decrease in the stress that the dogs were feeling. Soon, the dogs began to act calmer and more even-tempered. So, when prospective adopting families came in to view the dogs, they tended to stay longer, linger over the dogs that catch their eye, and ended up adopting at much higher rates.

While I made the decision to get Janice and Leroy from a trusted breeder, I have had plenty of shelter pups in my life, and can attest to the fact that they are always the best dogs. So, the fact that these studies into how music impacts dogshas made a difference for shelter dogs finding forever homes is pretty awesome in my book.

Another study performed by a Julliard concert pianist wanted to know if classical musical could be altered to be even more soothing for dogs. The team behind the study created a range of albums of classical music played at different frequencies. Remember earlier when we talked about howling? Howling begins with a higher pitch, and then moves to a lower pitch.

In this study, lower frequencies were found to calm down the nervous system in canines. The music was slowed to about 50 beats per minute, and the dogs’ heart rates started to mimic that rhythm. In addition, the music was simplified to allow the dogs to “zone out”, and that was a success.

This study also tested the same type of music on the person walking the dog. The study showed that the calmer the person on the other end of the leash was, the calmer the dog would act as well. Energy transference through a leash is a popular theory in the canine lovers’ world, but now we have proof that the way a person acts while walking a dog can makea huge difference.

So, if you’ve been trying out classical music for your pup, and it doesn’t seem to be working, perhaps you can give an altered copy a try. Lower the frequency a bit, slow down the rhythm, and see if your dog likes your remix better.

If you’ve checked out the pet section on Amazon lately, chances are you’ve seen an advertisement pop up for Cesar Millan’s “[easyazon_link identifier=”B074H6SV69″ locale=”US” nw=”y” tag=”natur0da-20″ cart=”n” cloak=”y” localize=”y” popups=”n” type=”link” link_id=”3090″]Guide to Audiobooks for Dogs[/easyazon_link]”. This is just a quick speech by Cesar discussing how listening to audiobooks while you’re gone throughout the day might be helpful for dogs.

Sure, it may make sense right off the bat that dogs like hearing a human speak. Many pet owners leave a TV on for this very reason. I once knew a Chihuahua who seemed to be partial to daytime soap operas. Her owner even referred to them as the dog’s shows, and no one was allowed to interrupt the dog during her shows.

But the guide goes into a little more depth about the way the sound of an audiobook may impact a dog’s behavior. For example, Cesar says that the gender of the narrator may make a difference for a dog’s stress level. The volume of the audiobook plays a big part as well, and he even explains how to choose the type of book with your dog in mind. This information all plays in to what the studies about music have been showing: dogs prefer lower frequency sounds, and they prefer something that sounds soothing. Action-packed books where the narrator must raise their voice and get a bit excited to match the scene are not great choices for pets; calm self-help books where the narrator is attempting to sound serene and wise, are usually much better.

If you don’t want to go so far as to get your dog their own Audible account, you can also simply give them toys that play little tunes when squeezed the right way. [easyazon_link identifier=”B00P0YQZ6Y” locale=”US” nw=”y” tag=”natur0da-20″ cart=”n” cloak=”y” localize=”y” popups=”n” type=”link” link_id=”3092″]ZippyPaws[/easyazon_link] has a huge range of stuffed toys, from a moose to a unicorn, that all play music. Or make yourself a Spotify playlist of classical music and set it to repeat while you’re gone!

At the very least, you can try to limit your dog’s exposure to heavy metal music and see what happens. It may be that your previously anxious, clingy dog is able to make some strides towards independence.

Some music lovers have even incorporated their dogs into their musical lives, taking their pets with them to rehearsals or jam sessions. If you play classical music, why not invite your pet to be part of your informal practices, where you can gauge how they respond to the music and adjust it. One composer even wrote whole songs based on how his dog responded to each note!

After all that research and all those studies, what did I learn? First, I told my friend to give the calming music a shot. There’s a chance it won’t have much of an impact at all – after all, dogs each have their own unique personalities. However, because dogs can’t really develop a “taste” in music due to their lowered ability to distinguish pitches, it’s unlikely that the music won’t work just because your dog doesn’t like it.

The overall takeaway from all this information is that dogs respond to calming rhythms, the sounds of instruments (particularly woodwinds), and lower frequencies. There is some interest also in providing dogs with other sounds, such as very soothing audiobooks, but music has been stealing the show in the research so far.

As for me, I don’t know if I’ll be having Janice and Leroy listen to any Mozart any time soon. They are both already very relaxed and calm dogs. However, I won’t say that it’s totally off the table. I’d be interested to see if some classical music would help during a storm, or during another anxious time.

The short answer is yes, dogs do seem to respond favorably to music. Probably not in the way that may pet owners think, but the positive impact that music can have on a dog is enough that I’d be okay with letting those owners believe what they want. Turn on some classical tunes and let your dog chill out for a while.

9 Strategies for People Who are Too Busy for Their Dogs