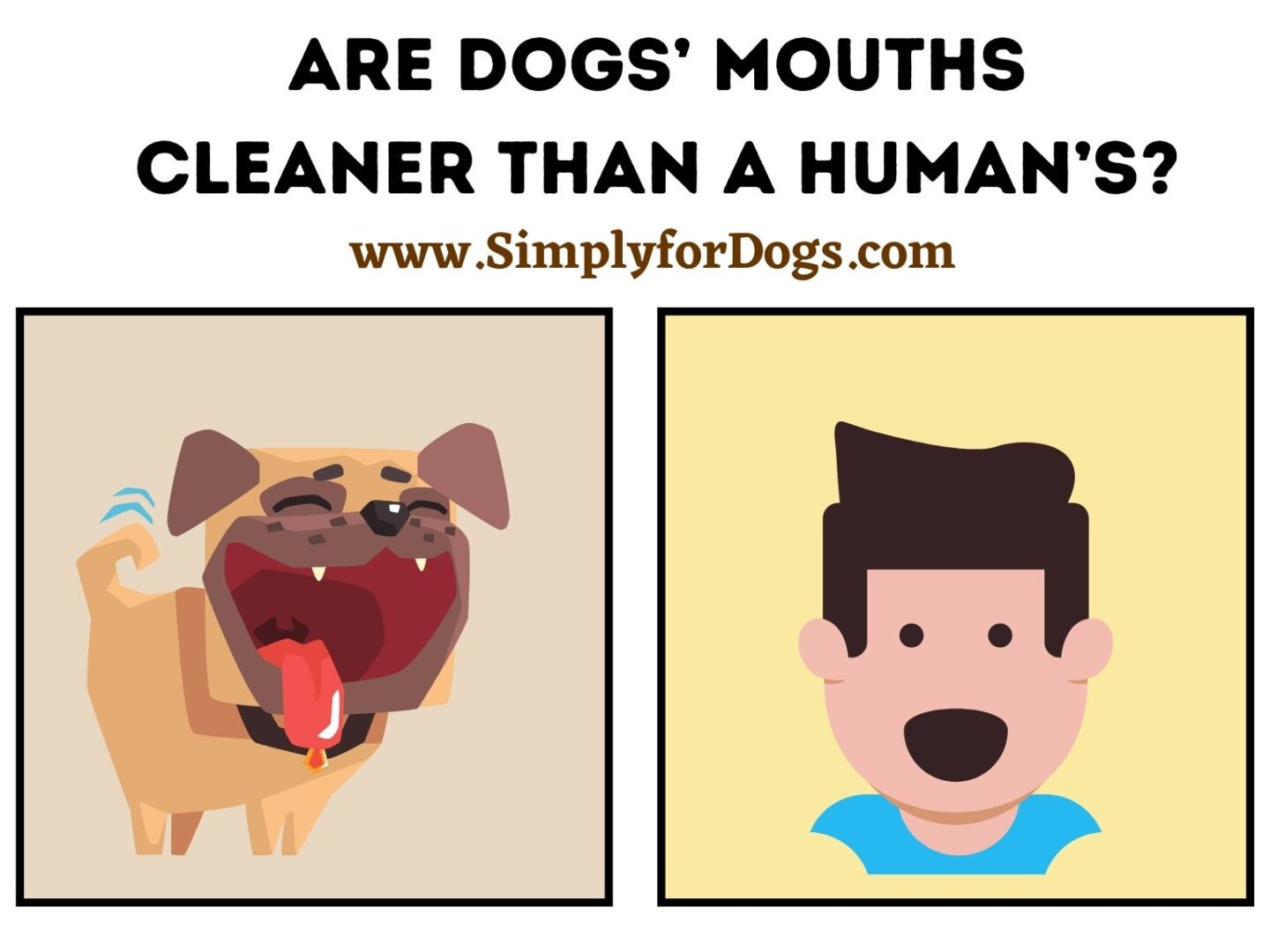 Let me begin by telling you that a lot of the time, statements like this are actually thrown out by dog lovers who are trying to pacify friends who aren’t crazy about dog kisses. I’ve done it myself – “Hey, what’s your problem? Janice is just trying to show you how much she likes you, and besides, the research shows that dogs’ mouths are cleaner than a human’s – 10 to 15 times cleaner, in fact!”

Where do I get those figures? Nowhere. I make them up!

The thing is, I love dog kisses, and I don’t have a whole lot of patience with people who don’t love dog kisses. One of the best things about dogs, in my opinion, is the way that they show their love for us by slobbering all over us while wagging their tails. But is this sanitary? Is it safe?

As I often do, I’ll tell you a story related to the topic of whether dogs’ mouths are cleaner than a human’s. So far, no one has posted any comments saying that they don’t like these digressions, and besides, as I’ve often pointed out, this is my blog, so we go by my rules. If you don’t like my stories, by all means, feel free to skip ahead to the meat and potatoes. And feel free to leave a comment. Until I’m overwhelmingly told otherwise, though, I’m going to keep on offering up stories.

This story is about a friend I had when I was growing up. I think it’s fair to say that Dwayne was my best friend. We met when we were in junior high, but we didn’t actually become friends in school. We had classes together, but we never socialized. Then, we happened to encounter one another when Dwayne was out walking his German Shepherd, Kelly, and I was out with my dog, Jake. We decided to walk our dogs together.

The rest, as they say, is history.

What that history included, though, was some pretty strange times at Dwayne’s house. Dwayne’s dad, although I didn’t realize it at the time, had Obsessive Compulsive Disorder (OCD). It’s well-known today, but back then, I don’t think it had a name. It’s a condition in which the sufferer might feel tortured by his or her thoughts, or have to engage in rituals to keep “something bad” from happening. Often, the sufferer is obsessed with cleanliness, and might engage in constant hand-washing, mopping the floors and scrubbing surfaces several times a day, and even refusing to shake hands with people because they’re afraid of being “contaminated.” The comedian, Howie Mandel, has OCD that manifests as a crippling fear of germs, and even went public with it in his autobiography, “Here’s the Deal: Don’t Touch Me.” That’s the same type of OCD that my friend’s father had.

When I’d go to Dwayne’s house, the first thing we had to do was put Kelly in her doghouse; she wasn’t allowed in the house because she was “dirty” and we had to tie Jake nearby. Then we could go inside and make ourselves a snack, or watch TV. If we touched the knob on the TV, though, we had to wash our hands afterward. This was before remote controls, but I’d imagine that if remotes had been available back in the day, we’d have had to wash our hands every time we changed channels. 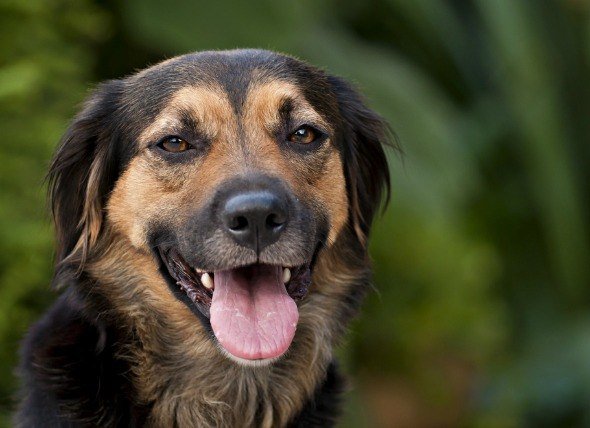 Dwayne’s dad would also watch us when we were outside with the dogs, and heaven forbid that Jake or Kelly should offer a kiss! If that happened, we had to come in and wash our faces.

Oh, and drying off afterward? Well, we had to use a freshly laundered towel, and hold it away from us so that it only touched our faces – not our dirty clothes! Then, we had to put the towels we’d used in the washer, and launder them immediately.

Of course, I didn’t know that this was abnormal behavior, although it certainly wasn’t what went on at my house. At my house, dog kisses were fine and laundry only happened on certain days of the week, not in response to possible contamination from dog slobber.

Your Dog Has Bubbles or Foam on His Mouth – Should You Worry?
35 Dog Breeds with Spotted Tongues
Finding a True Remedy to Doggy Breath (Video)

What Am I Getting at Here?

I know this has been a pretty round-about way of getting into the issue of whether or not dogs’ mouths are cleaner than a human’s, but hey, any excuse for a good story, right?

I think what I’ve been driving at, though, is that people can get totally bent out of shape over the cleanliness of a dog’s mouth. I’m also trying to make the point that Dwayne and I both probably came into contact with a good deal of dog saliva, and since I found him on Facebook a while ago, it would appear that we have both lived to tell the tale.

So, if you want, you can stop right here and probably take it on faith that your dog’s kisses are not going to make you sick. If you want to know more, though, keep reading.

Okay, so are dogs’ mouths cleaner than a human’s? The answer often depends on the individual dog, and the individual human. On the one hand, most humans usually brush their teeth at least once day. They also floss and might use mouthwash. Generally speaking, they don’t drink out of toilets, and they don’t invade the trashcan in search of goodies. They also don’t eat poo, usually; although, there are Internet sites where – well, never mind. Dogs also can’t brush their teeth, and unless their human does it for them, they can end up with plaque and tartar buildup that can lead to gum disease and tooth decay.

So yes, a dog’s mouth can be very, very dirty. Will your dog pass diseases onto you because of a dirty mouth, though? It’s not likely. But there are other things you need to consider.

Of all the adverse health conditions your dog can be diagnosed with, gum disease is the most common. And there’s a shortage of veterinarians who are able to treat dental issues. In fact, if you live in a rural area, well outside a major center, chances are you won’t be able to find anyone who can treat gum disease, perform root canals, or perform other dental procedures on your dog. If your dog does develop gum disease, those doggie kisses are going to smell pretty nasty, and besides, your dog is going to be very uncomfortable and perhaps even in horrible pain once the condition progresses to the point where it causes tooth decay.

You might think that your dog doesn’t experience dental pain the same way that you would, but you’d be mistaken. Dogs don’t often display signs of pain. This is because of their ancestral background. In the wild, dogs would have done everything possible to avoid showing pain, because pain would have been a sign of weakness, and the other dogs in the pack would have killed them. This ancestral memory continues today; a dog can be in horrific pain and yet give the appearance of being just fine.

Now, here’s a sobering statistic: by the time a dog reaches age 4, there’s an 80% chance that he will have at least some form of dental disease. Your dentist has probably told you that if you don’t have gum disease and/or tooth decay treated, you could end up with other problems, like diseases of the heart, kidneys, and lungs. The same is true of dogs.

The best way to keep your dog healthy is to keep his mouth clean. You can do this by brushing his teeth at least twice a week, feeding him a meat-based dry diet, and giving him things to chew on that will take plaque and tartar away from his teeth.

Back to the Point

Are dogs’ mouths cleaner than a human’s? No. How could they be, given the toilet-drinking, the garbage-invading, and sometimes even the poo-eating? But will you get sick from dog kisses?

Again, no. A healthy dog is highly unlikely to pass anything on to you that will harm you. This is because the bacteria contained in dog saliva (and even the poo that they eat!) are very different from those contained in human saliva, and there are very, very few bacteria that can jump from one species to another and cause diseases. Dwayne’s dad was, quite simply, obsessing over nothing. Which is, of course, the basic foundation of Obsessive Compulsive Disorder.

Your Dog Has Bubbles or Foam on His Mouth – Should You Worry?
35 Dog Breeds with Spotted Tongues
Finding a True Remedy to Doggy Breath (Video)

I love dog kisses. And I never worry about whether dogs’ mouths are cleaner than a human’s. I’m fully confident that nothing Janice or Leroy has slobbered upon me has ever made me sick. So if your dog wants to show his love for you by showering you with kisses, let him. Keep his mouth in good shape, though, so he can continue to give you those wonderful kisses for many years.