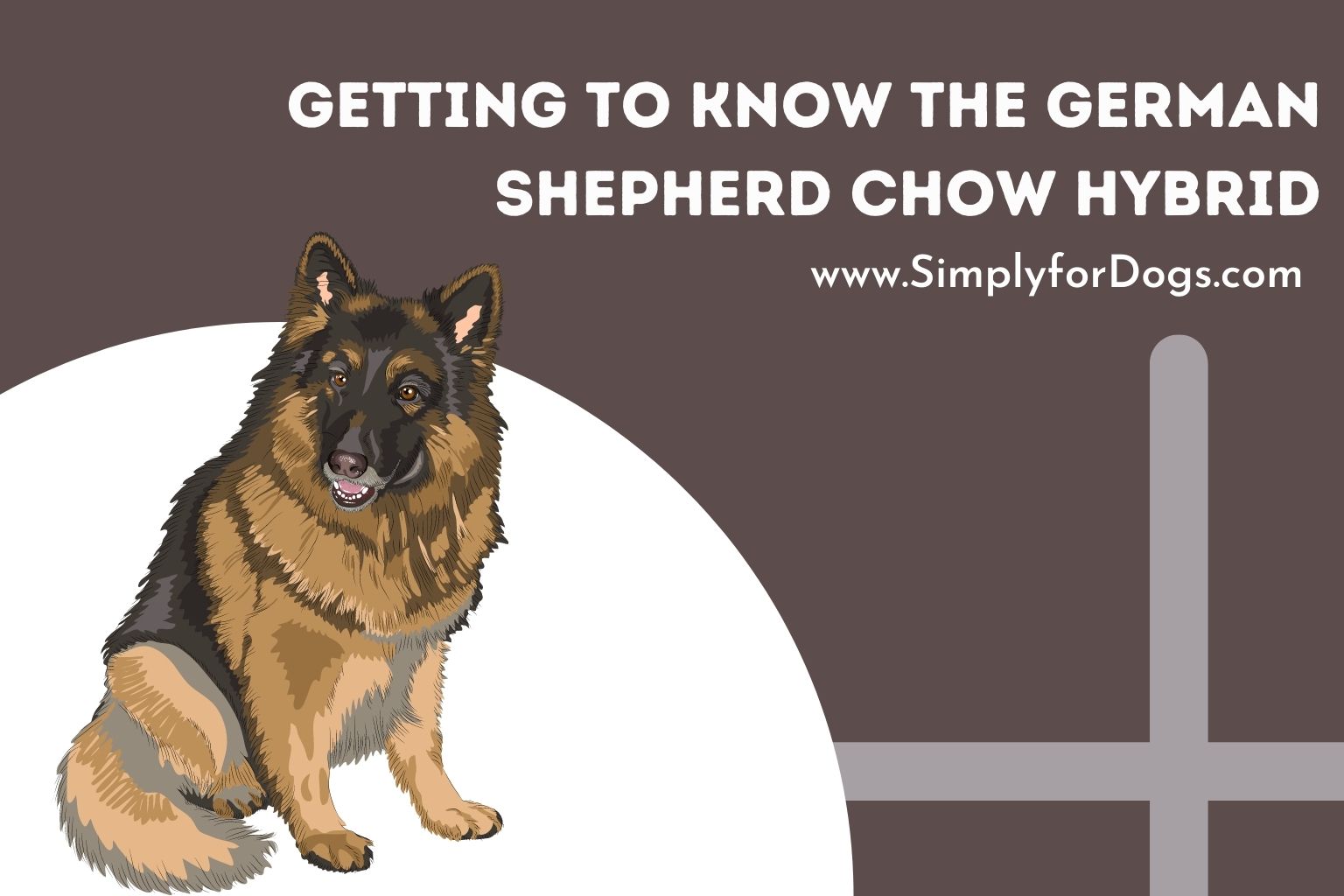 Lately, I can’t believe how many popular crossbreeds there are! Sometimes, I get a little annoyed with “cutesy” names like “Anything-That-Ends-With-Doodle,” really tortured names like “Pitador” and so on, and, of course, if you’ve read my post, Why You Should Walk Away From Teacup Dogs, then you know where I stand on those horrid little designer mixes that have organs so tiny that most veterinarians don’t even feel good about working on them.

Now, having said that, I really hate those lame names. Let me introduce you to the Chow Shepherd. As “blend” names go, this isn’t really all that awful. A Chow Shepherd is pretty much what you might expect: a German Shepherd Chow hybrid. So, if you choose a Chow Shepherd, what kind of dog are you going to end up with?

The first is that, in addition to being outstandingly beautiful, the German Shepherd Chow hybrid can also be outstandingly dominant. This is not a dog for someone who’s new to training or who doesn’t have a good understanding of the personality of a very assertive dog.

But before we get into that, let’s talk a bit more about the German Shepherd Chow hybrid’s appearance.

This makes for a really unique-looking animal. He’ll probably resemble a lion or a bear more than a dog, at least at the front end. Once you move down the back, though, you’ll find the curly tail that is common to the Chow.

A Chow Shepherd is probably going to be a big dog, because he comes from two large breeds. You can expect this Chow hybrid to stand anywhere from 18-26 inches at the shoulder. About the smallest you can expect in terms of weight is about 40 pounds, but it’s more likely that your Chow Shepherd will hit around 90-95, if not more.

In terms of color, the Chow Shepherd can be brown, red, black, white, blue, chocolate, dark brown or a mix of black and brown. 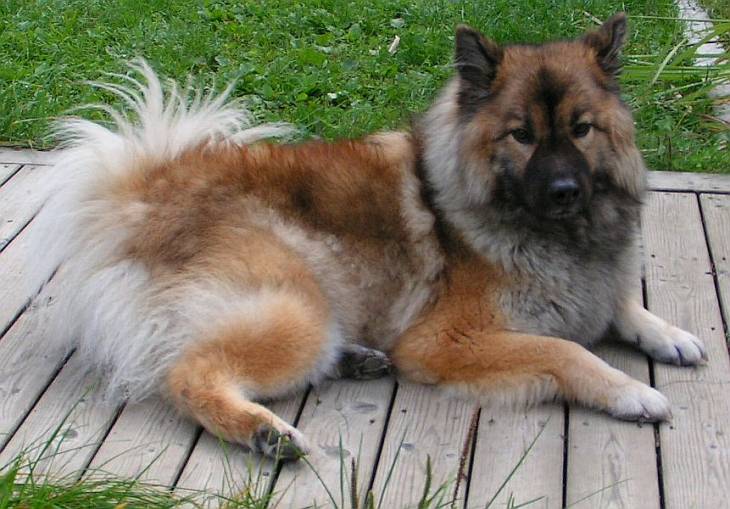 Chow Shepherds are extremely intelligent. On both sides, they come from working stock. This means that they have a lot of energy, and that energy needs to be channeled.

You can’t expect this type of German Shepherd Chow hybrid to be happy just snuggling up with you, although he will, after a hard day’s work.

Another thing about Chow Shepherds is that you can’t expect them to immediately warm up to strangers. They can be aloof. They’ll usually want to be with their family, and will, in fact, be very much bonded to their family members, but don’t expect them to react with the attitude of, say, a Labrador, when it comes to strangers. Strangers, to a Chow hybrid, are not friends they haven’t met yet. They’re strangers. So early socialization is very important if you expect your Chow hybrid to react well to anyone outside the family.

The other thing about Chows, and the hybrids thereof, is that they can become very anxious if they’re left alone for long periods of time. Separation anxiety can be a real issue, and some Chow hybrids will react to being alone by becoming very destructive. They need a lot of love and attention, so if you’re not going to be home, it’s best to find someone who can keep your Chow hybrid company. You might also consider enrolling him in puppy kindergarten.

Chow hybrids, no matter what they’re mixed with, are almost always going to need a lot of activity and exercise. These dogs don’t just need regular walks; they want to run. So unless you’re really athletic, the chances are that a Chow Shepherd is not the right dog for you.

Chow Shepherds also need a lot of mental stimulation. The thing is, though, that usually this type of Chow hybrid figures out activities very early on, so “puzzle games” that might work for other dogs are just going to bore your Chow hybrid. You’ll have to work hard at introducing new, fun ways to stimulate him.

Chow hybrids do best when they have big yards to play in, and people who love to play vigorously. What this means is that you shouldn’t even think of trying to keep a Chow hybrid in an apartment. He wants to hike, run, and play like crazy, and if he’s locked up in a small space, you’re going to end up with a lot of behavioral problems.

That said, though, if you’re not a novice dog owner, and if you have some experience with big, athletic dogs, you’ll do just fine with a Chow hybrid. Chow Shepherds in particular are very trainable. They catch on quickly. They can be stubborn, though, and if you don’t make sure that you’re the boss in the training scenario, your Chow Shepherd will quickly run roughshod over you.

I hope you love grooming, because you’ll have to do it daily with your Chow Shepherd. They shed like crazy! They’ll shed on your carpet, your clothes, and just about everywhere else. They’re also seasonal shedders, at which point, things are going to get even worse.

You can dial back some of the shedding problems by brushing daily, but you’ll still need to deal with hair deposited all over the place. If you love your Chow Shepherd, though, you probably won’t mind cleaning up after him.

Other grooming issues aren’t all that much different than they are with any other dog; you’ll want to keep your Shepherd Chow’s nails clipped, check his ears from time to time to make sure that he hasn’t picked up an infection, and brush his teeth a few times a week.

The German Shepherd Chow hybrid is a relatively new mix, so there aren’t all that many health issues attributed to the breed. Many large dogs, though, have a propensity toward hip dysplasia, so you should ask your breeder to show you clearances on the parents. Keep in mind, of course, that your Shepherd Chow may never develop hip problems; it’s just something to keep in the back of your mind.

Your German Shepherd Chow hybrid will probably inherit his life expectancy from either breed. It’s about 10-12 years for both Shepherds and Chows. Sometimes, though, cross-breeding actually results in a longer life expectancy for the cross, so you might get a bit more.

German Shepherd Chow mixes aren’t all that trendy right now. So what that means is that your “out of the gate” cost won’t likely be all that much. Right now, a Shepherd Chow goes for anywhere between $250 and $750. Of course, you will have to pay for veterinary care, food and bedding. This type of Chow hybrid is not all that prone to health issues, so although you might expect that, in his later years, he might need some type of medical care, you can rest assured that you probably have a very healthy mix that won’t cost you an arm and a leg in vet costs.

The Shepherd Chow is not a dog for everyone. He needs an assertive owner, and someone who wants to be active. He also needs someone who won’t leave him alone for long periods. If this sounds like you, then this wonderful, fluffy dog might just end up being your best friend.