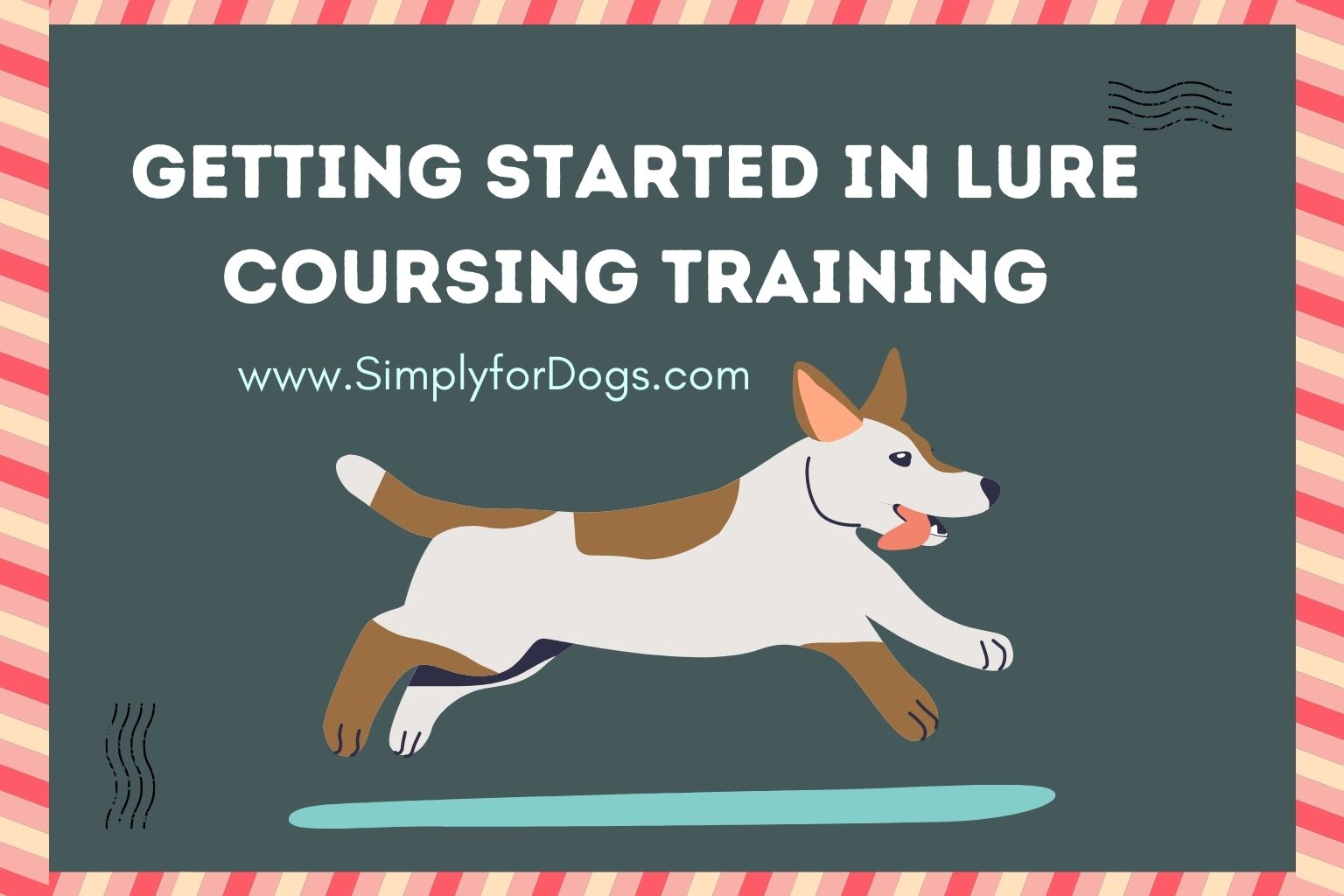 If you have a very active dog and are finding it difficult to accommodate his exercise needs, lure coursing can be a great way for him to blow off some of that pent-up energy. Lure coursing training is fun for humans, too! So, let’s take a look at this exciting sport.

What Is Lure Coursing?

Lure course training is a sport in which your dog is taught to pursue a mechanical lure. It was once pretty much reserved for sighthounds, but in recent years, recreational lure coursing has been open to virtually any breed of dog. The only requirement is that the dog needs to be in good physical condition – it’s not a good idea to take a dog that’s been accustomed to leading a couch potato lifestyle, and throw him headlong into lure coursing.

As I just mentioned, it’s a great way for your dog (and you as well) to get some exercise.  Also, if your dog has a high prey drive, lure coursing can be a good way of channeling that drive. And finally, it’s a great opportunity for you to go out and meet fellow dog lovers, and possibly make new friends.

Modern lure course training is based on the older activity of using dogs to chase live game. Sighthounds were bred specifically for tracking foxes, hares, and sometimes, even larger game like boar, antelope or deer. In the middle ages, this type of sport was very popular among royalty and the nobility, but coursing actually goes back even further – documents dating back about 4,000 years depict Egyptian hunters using long-legged dogs for coursing.

Using dogs to chase game is less common than it used to be, but still practiced in some areas (see A Look at the Deer Dog Culture Controversy for one example). In the 1970s, though, a group of sighthound owners in California, led by a man named Lyle Gillette, wanted to find a way for dogs (and their humans) to enjoy coursing without harming other animals. So, they created a controlled form of lure coursing training. Lures were created from artificial materials like plastic or fake fur and attached to strings which ran through a pulley system that was set up in a field. A mechanical switch was used to regulate the speed of the lure.

The system is essentially the same today – the course is set up with a specific number of turns and changes in direction. Although the speed of the lure can vary, in official lure coursing events the lure must be capable of speeds of more than 40 mph. The course itself can be anywhere from 600-1,000 yards. Due to the possibility of growth plate injuries that vigorous exercise can cause in young dogs, a dog has to be at least a year old to compete in an official event, in which he will be scored on endurance, speed, ability to follow, and enthusiasm as well as agility. Brachycephalic (short-nosed) dogs are permitted to compete, but their owners are expected to keep a close eye on them and remove them from the competition if they show signs of distress.

Down, Boy! Training Your Dog Not to Jump on People(Training Video)
Your Guide to Finding Dog Trainers in Nashville TN (Video)
13 Basic Commands Every Dog Should Know (Video)

Given the popularity of lure coursing training, you shouldn’t have too much difficulty finding a lure coursing club – just try a Google search using the term “lure coursing” along with your neighborhood, and see what comes up. There are several organizations across the United States, most of which hold their own coursing events, and most of which will accept dogs of any breed.


Some lure coursing clubs will require you to muzzle your dog, but most of the time that’s left up to the individual owner. If your dog isn’t typically aggressive, you can probably dispense with the muzzle, and as to other dogs, most of the time they’re too invested in the chase to be inclined toward “mixing it up.”

Your Duties as a Handler

You’ll get a little bit of exercise when you and your dog participate in lure coursing, but mainly it will involve taking your dog out for a walk before the event – this is simply so that your dog isn’t likely to poo on the field. You’ll also have to hold your dog at the beginning so that he doesn’t “jump the gun,” so to speak. You’ll also be expected to be able to reliably call your dog back to you once the event is over.

Of course, you’ll need a few things for lure coursing training and competition. Many of the items are just common sense, and your local club can advise you as to whether they require anything in the way of specialized gear. At the very least, you’ll need a slip lead and some way of distinguishing your dog from others that might look very much like him (usually a colorful blanket or bandanna). An exercise pen or crate will also be helpful in order to keep your dog comfortable. Be sure too, to bring something that you can sit on – it can get pretty uncomfortable standing all day long at an event. You’ll also need to bring water for your dog (don’t forget a bowl!) and drinks for yourself as well.

Again, some clubs will require muzzles, so bring one if it’s required, or if you think your dog should wear one.

If you’re planning on participating in a local event, first get in touch with the club to find out if there are prerequisites. Most don’t require experience, and all you really need is a physically fit dog that loves to chase.

Start off with short training sessions at home, and gradually work up to the point where your dog will be up to the challenge. Dogs are like people in that you can’t really expect one who’s been leading a mostly sedentary lifestyle to all of a sudden take on a significant athletic challenge without running the risk of injury. So keep the sessions short, to begin with, and gradually build up your dog’s endurance.

It’s also a good idea, before diving headlong into competition, to observe an agility trial – that way, you’ll know what you and your dog can expect. Bring your dog, too – you might be surprised at how much he’ll learn just from watching other dogs compete! If you let the organizers know that your dog has never run the course before, they’ll usually be quite willing to find some time for you to do a practice run or two. You’ll also often find that most participants will be very helpful if they know that you’re a beginner.

The most important thing for you to do at home is work on your recall until you’re 100% confident that your dog will always come back to you. It’s your responsibility at a competition to have your dog under control, and nobody wants to have to deal with renegade canines!

If you and your dog plan on competing regularly, keep in mind that you’re not always going to win. Sure, winning is great, but at its essence, lure coursing is really about spending time having fun with your dog.

If you don’t have a club close by where you can practice your lure course training, you can make a lure very quickly and cheaply. Just find a light weight toy, or even a plastic bag, and tie it to a length of fishing line. Then, settle on a verbal command that you’ll use when you want your dog to chase the lure – something along the lines of “Go get it!” or “Chase!”

Play “keep away” for a bit – this revs up the urge to chase. Of course, you don’t want your dog to become discouraged, so let him win sometimes, and allow him to play with the toy for a bit – not long enough that he gets tired of it, though.

If your dog doesn’t seem all that keen on the lure you’ve chosen, try something else. You’ll usually find that most dogs are very interested in anything that squeaks.

Lure coursing events are held in controlled environments and with a high level of attention to safety. Keep in mind though, that any sport that involves high speeds and sharp turns is going to be very demanding, and don’t expect more from your dog than he can reasonably deliver. If you have any concerns regarding your dog’s physical condition, consult your veterinarian before competing. And obviously, do the same if you have reason to think that your dog is in distress following an event.

Pay close attention to your dog’s toenails. Nail tears are among the most common injuries in racing events, so your dog’s nails should be clipped short enough that when he’s standing on a flat surface, his nails don’t make contact with the surface. Watch out for the dewclaws as well, if your dog hasn’t had them removed. You can buy wrapping material from your pet supply store that will protect the dewclaws so that they don’t end up stuck in the lure. Wrap just before the run, and remove the wrap immediately after.

After the event, take your dog for a brief, slow walk to allow him to cool down. This will be a good time for you to observe him, and see if he appears to have any injuries, or abnormality in his gait. If it’s a hot day, you can also make your dog considerably more comfortable by wetting him down, and once his breathing is back to normal, give him water to drink.

On the morning of the event, give your dog only half the amount of food he’d usually eat at that time. This is in order to reduce the risk of bloat. Also, wait an hour or two after the run before offering more food.

Down, Boy! Training Your Dog Not to Jump on People(Training Video)
Your Guide to Finding Dog Trainers in Nashville TN (Video)
13 Basic Commands Every Dog Should Know (Video)

Lure coursing is a fun sport that really doesn’t require a whole lot of effort. Lure coursing training is usually minimal since most dogs naturally want to chase a moving object – this is especially true of dogs that have a high prey drive.

If you think lure coursing sounds like something you and your dog would enjoy, find out if there are clubs in your area, and then get to work on your lure coursing training. If it turns out not to be for you, you can walk away without guilt and find something else to do with your dog, because you will have spent little or nothing on gear.

Have you tried lure coursing with your dog? Are you still participating? If so, what do you and your dog love about the sport? If not, what didn’t you like? Leave a comment!