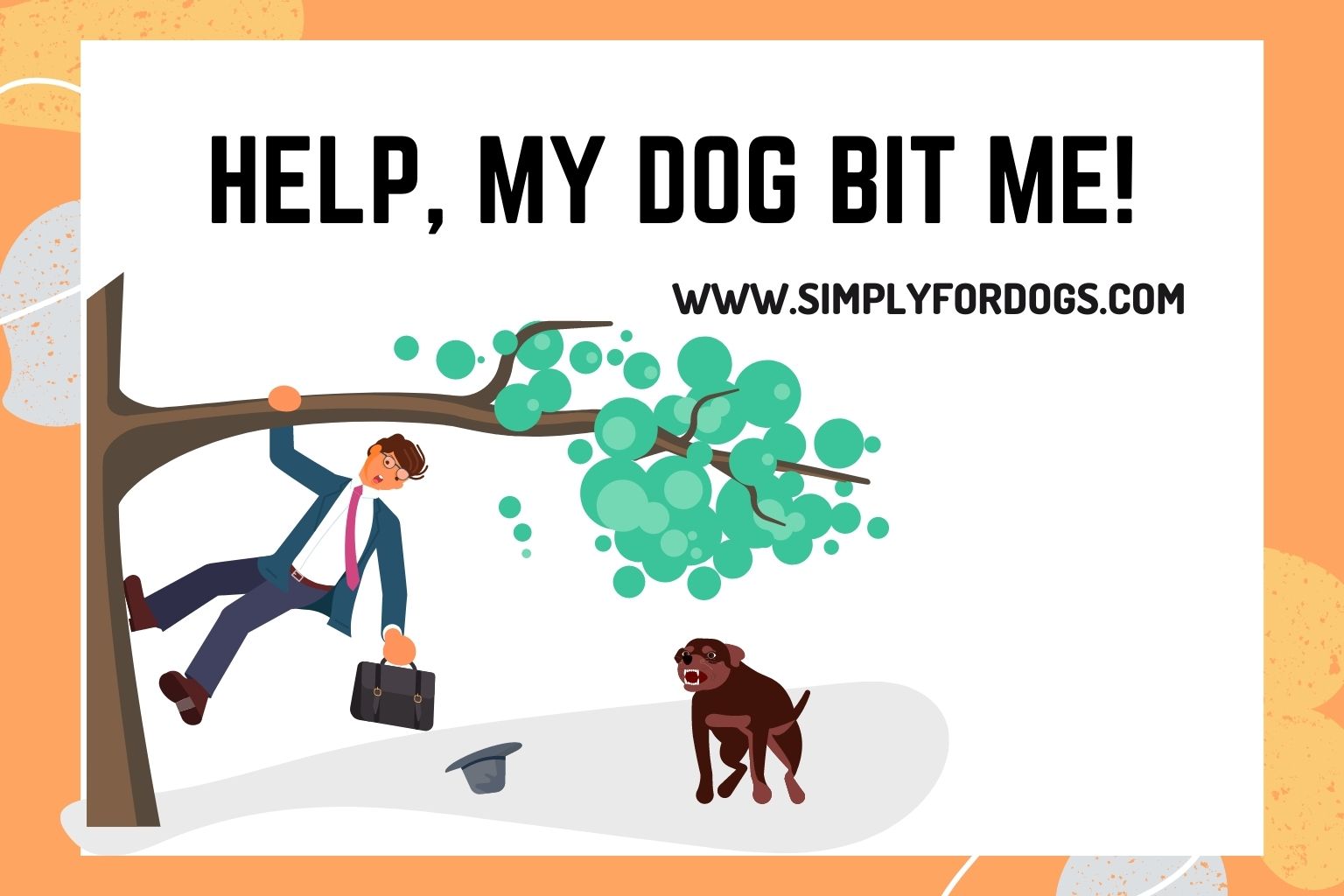 Sometimes, no matter how much you and your dog love one another, you could end up being bitten. And of course when a bite comes from your own dog, it doesn’t just hurt physically – it can break your heart.

So what should you do if your dog bites you? If it’s a puppy, not much. Just offer a firm correction and move on. Puppies are all going to bite at some point, out of excitement or maybe to just test the boundaries a bit. If you’re not dealing with a puppy, though, you’re going to have to figure out why he bit and make sure that it doesn’t happen again.

Why Your Dog Bites

There are five main reasons why dogs bite. They are:

Some bitches, soon after giving birth, will display a very strong maternal instinct. If she seems to need her space, just let her have it and you may be able to avoid a bite. Eventually, she will come around and let you handle the puppies, but it is best to be respectful until she is ready.

As to pain, this is one of the most common reasons for dogs to bite their humans. Often, it can be difficult to tell if a dog is in pain. After all, they can’t tell you that they’re hurting, and they may react to an unexpected touch in a sore area with a warning nip. First, consider whether the bite could have been due to possessiveness, fear, or prey instinct, and if you rule out those three, take your dog to the vet. He or she can determine if your dog is in pain and take measures to treat the problem.

Now, let’s move on to the other three issues.

This is the most difficult type of biting to deal with, but it’s one that you absolutely must correct. If your dog bites when you try to take away food or a toy, it’s not a spontaneous reaction – your dog is trying to dominate you. You are going to have to establish boundaries and rules, and then you need to enforce them. Your dog needs to know that you are the boss, and that he cannot have anything that you do not want him to have.

Where toys are involved, teach your dog to “leave it.” Catch your dog holding his toy, and then approach him with a treat. Tell him “Leave it,” and when he puts the toy down, give him the treat. This is going to require patience, because you have to wait for him to put the toy down on his own and lose interest in it, and then reward the behavior. Grabbing the toy is just going to defeat the purpose – you’ll be able to take the toy away from him later, just not right now. Gradually, you’ll progress to the point where you can pick up the toy as soon as he drops it, and soon he will learn to drop the toy when you say “Leave it.” Ultimately, you will be able to take the toy out of his mouth without fear of being bitten.

It’s similar with food aggression. If your dog bites when you try to take his food away, toss a couple of his favorite treats in the bowl, but don’t touch the bowl. Do this every so often when he is eating. Progress to the point where you are able to touch the bowl, and finally to take it away. If your dog associates your approaching the bowl with good things like treats, you will eventually be able to handle the bowl without getting bitten.

Being able to take things away from your dog isn’t just about establishing dominance, although that is important. It’s also a safety issue – you need to be able to take away anything he has picked up that could harm him.

If your dog has bitten you because you frightened him – maybe tripped over him while he was sleeping, for instance – then this could be just a one-off. You may need to work a bit on restoring his trust, though. If he seems anxious around you after the fright, do a bit of training. Teach him some tricks, and offer treats when he gets it right. You want him to get back to associating you with good things.

Prey instinct bites are usually accidental. Perhaps you are playing tug of war with your dog, and he grabs for the toy and misses, getting your hand instead. You don’t have to stop playing tug of war with your dog – there’s a myth that the game encourages aggression, but dogs with a strong prey drive need to channel it, and tug of war is no more harmful than any other game. If you think he’s getting too excited, though, just change the game – switch over to fetch. Make sure, though, that you train him to sit and wait for you to throw – you don’t want him grabbing at the toy!

The most important thing you can do if your dog bites you is stay calm and don’t rush things. Follow the methods outlined above for various biting issues. If your dog is naturally excitable, he may need a bit of calming down too, in order to ensure that training sessions don’t turn into stress-fests. There are several calming preparations available, like NaturVet Quiet Moments Plus Melatonin. It safe for dogs three months and older, and it can help to manage tension and stress. The list price is $13.59, but it is available now at Amazon for $13.59. These soft chews are also useful for relaxing your dog before vet visits or car trips.

If your dog bites you, the world won’t come to an end. Your injury will heal, and so will your broken heart. Just figure out what caused the bite, and then work on preventing it from happening again.