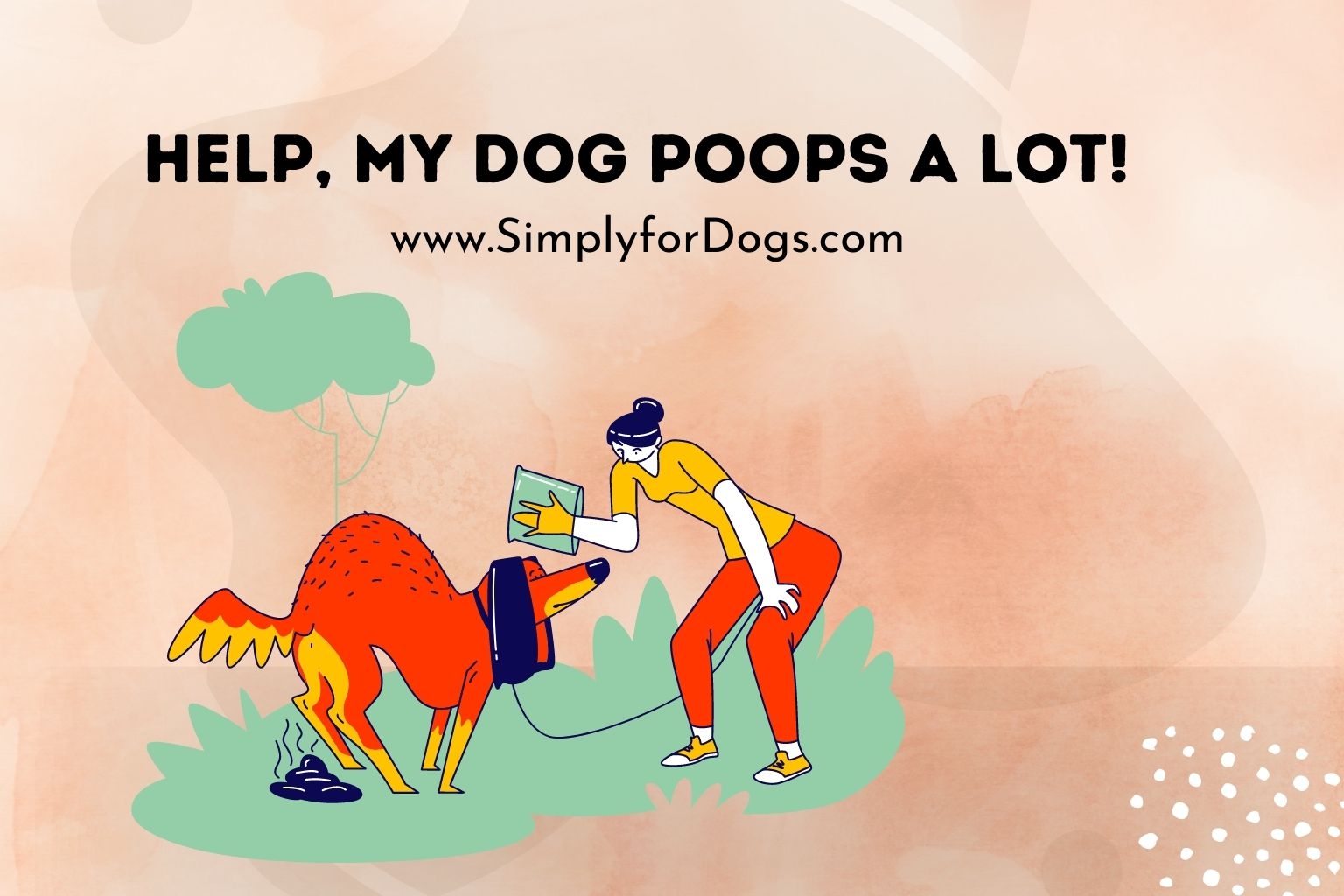 In Yuck, My Dog’s Breath Smells Fishy, I pointed out to anyone who might be interested (and, I suppose, to anyone who might have had no interest at all) that Janice sleeps on the pillow next to mine, with her big Boxer butt in my face, and she farts all night long. I also pointed out that this is just fine with me. I don’t even mind the smell all that much, which I assume puts me in the minority and might even make me a disgusting person, but hey, it is what it is. If Janice is farting, she is alive and presumably well, and I’m good with that.

So, I’m devoting this post to farts and poop. Farts are one thing in my books, but poop is another entirely. Further on Janice, when she was a puppy and before she was house trained, I often felt as though I was living in a poop factory. It seemed as though I was constantly cleaning up poop – Ash MacDonald had a farm, eeyi eeyi oh! And on that farm there were some piles, eeyi eeyi oh! With a poo poo here and a poo poo there, here a pile, there a pile, everywhere a pile pile! There were times when I just wanted to throw my hands up in frustration and scream, to anyone who cared to listen, “Help, my dog poops – a lot!”

By the way, my last name is not MacDonald. Not that it matters.

How Much is Too Much?

I’m reminded of an old saying, sometimes attributed to Confucius: “When two people are in an elevator, and one farts, everyone knows who did it.”

Somehow I doubt if Confucius actually said this, simply because in his day, there were no elevators. That said, you could fill the biggest ballroom in the biggest hotel in the biggest city with hundreds of people and one dog, and if you smelled a truly pungent fart, you could bet that the dog was responsible. Maybe your dog poops a lot, or just farts, but either way you will never confuse the odor emitted by the typical dog with anything even remotely human. Dog farts, and dog poops are a lot of the time likely to result in a response like “Did something crawl up his butt and die?”

You Are Not Alone

You really are not alone. Many people have a dog that poops a lot, and farts incessantly. Before we go any further, though, I’d just like to point out that if this is the biggest problem you have in your life, you’re probably pretty lucky. Assuming that you have a roof over your head, enough to eat, and your health is good, then if your dog poops a lot, you should most of the time just count your blessings and get over it.

So, when does the fact that a dog poops a lot and farts like crazy become a real problem?

Well, most of the time, it’s not so much a problem with the dog as it is a problem with the humans involved. I’m always saddened when I hear about a dog that has been banished to a doghouse in the back yard, or who never gets to go for a drive, because some human’s nose is a little too sensitive. As I pointed out in Can Dogs Live Outdoors Full Time?  dogs are pack animals and are meant to live in the house with their humans. If your dog poops a lot or farts frequently, that’s not a good reason to deny him human companionship.

That out of the way, let’s get back to the problem at hand – your dog poops a lot or farts like farts are going out of style. Farts first.

What Does Normal Puppy Poop Look Like?
Interesting Things to Know about Your Dog’s Bathroom Habits (Video)
The Dangers of Not Picking Up Dog Poop

Everyone and everything that is carbon-based, farts. It’s a given. In fact, if you’ve ever heard of any human or any animal that has never farted, I would very much appreciate a comment (see the “comments” section below), because this is something that I want to know about.

So, what causes farts? Sometimes it could be an intestinal infection, but this is pretty rare. Most of the time it’s due to the food that you are feeding your dog. It could also be due to a sudden change in food – sometimes, when you switch from one dog food to another, your dog’s digestive system takes a bit of time to adjust, and during that adjustment phase, the farts can come fast, furious and foul.

If you have been consistently feeding the same brand of dog food, though, and the farts are still highly offensive, you might want to consider changing brands. “Garbage in, garbage out” applies as much to dog food as it does to computer programming.

Now, I realize that I have opened myself up to a lot of argument when it comes to food. I have repeatedly stated that I feed my dogs nothing more than good generic – I absolutely will not spend $50 or more for a tiny bag of “designer” dog food that actually has little more in the way of nutrients than the store brands. That said, though, the best food is the food that is right for your dog. If you find that your dog poops a lot or is extremely flatulent when you feed a store brand, then you might want to scale it up a notch and see if that corrects the problem. I’d just suggest that you don’t go nuts with it and immediately go to a really pricey dog food.

There are common food brands, premium foods, and foods that fall somewhere in between.So experiment a bit before you open your wallet all the way. You could also choose to make your dog’s food at home, although I have to say that I really don’t recommend it, unless you are prepared to do a great deal of research and have all sorts of time on your hands. Practically any dog food will give your dog the level of nutrients he requires, and simply stated, you probably don’t have the benefit of years of research and product trials that will enable you to say “Yes, this is the perfect food for my dog.” Commercial foods are specifically formulated to meet your dog’s nutritional requirements, and if fed on a schedule, or even free-fed, will be satisfactory. Once you start trying to make your own dog food, you will have to practically become a canine nutritionist, and that is a task to which most of us are simply not equal.

My Dog Poops a Lot and He’s Fat – Is There a Connection?

Yes, there is. Food in, poop out. So if your dog poops a lot, there is a good chance that you are over-feeding him.

Now, my vet disagrees with me on feeding methods. My approach is simply to buy a big bag of dog food and dump it in one of those great Rubbermaid containers. Then I let Janice and Leroy have at it whenever they choose. They never overeat, and neither has a weight problem, because food is not an issue for them. It’s just something that they go and get when they need it, and leave alone when they don’t.

That said, whether you’re free feeding the way I do, or feeding on a schedule, if your dog is fat, then for whatever reason, he’s obviously getting too much to eat. And if your dog eats too much, then your dog probably poops a lot.

If this is the case, then you will need to reduce your dog’s food intake, or perhaps change your brand of dog food. 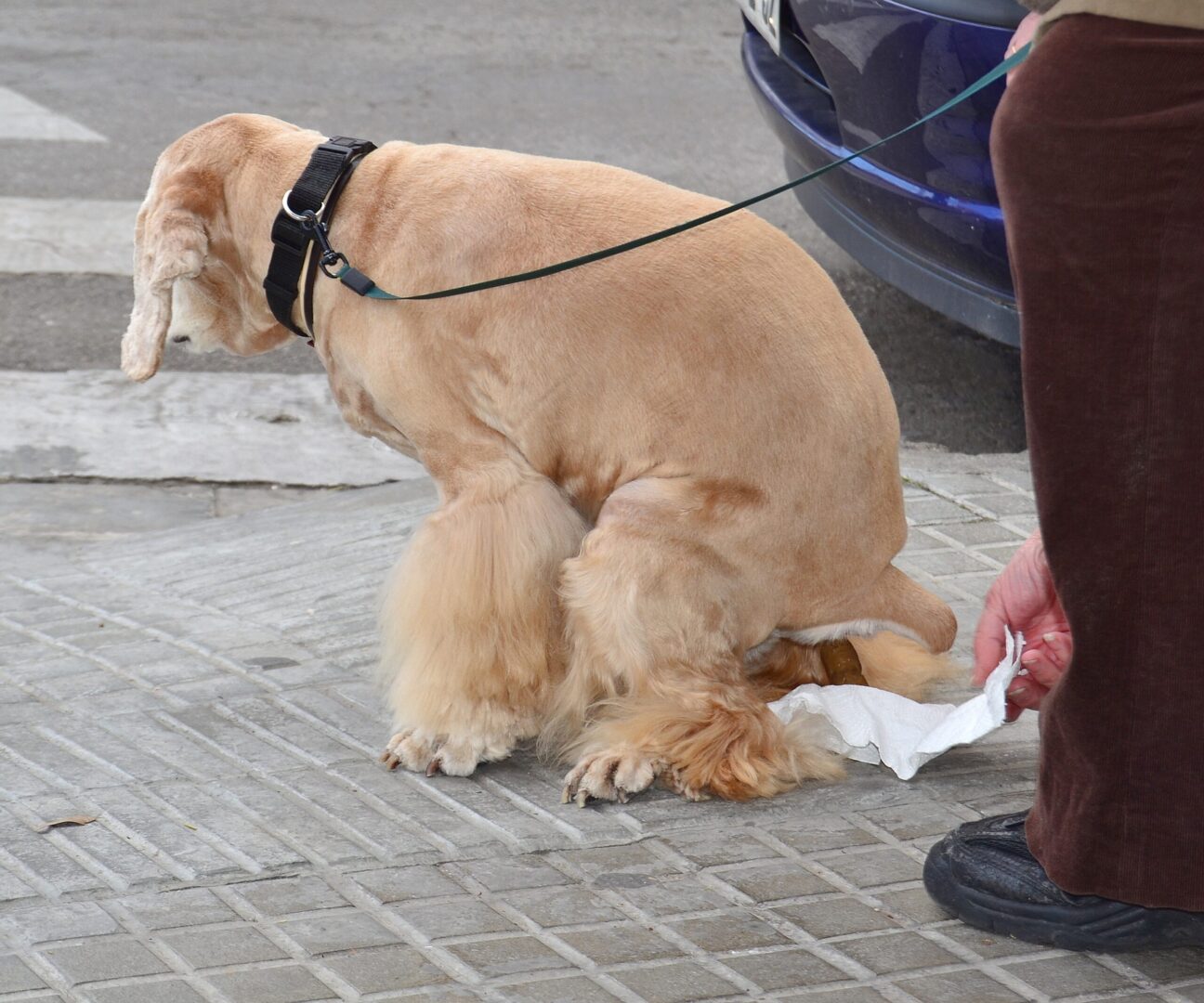 Why would you change the brand? It’s because dogs are creatures of habit. If your dog is accustomed to eating, say, four cups of dog food a day, he will probably continue to eat four cups even if three might work to satisfy his caloric requirements. The converse is true as well – if your dog needs four cups of dog food per day to meet his needs, but he has been used to only having three, he might just continue to eat three cups, and therefore lose weight. This is why I free-feed instead of putting out bowls of food twice a day. Even if I change brands, I can be reasonably assured that, because food is not a “special occasion” for my dogs, they will eat what they need – no more, and no less.

A Word About Treats

Another way that people make food an issue with their dogs, and cause their dogs to poop a lot, is by offering treats. Now, I’m not saying that your dog doesn’t deserve a treat from time to time, but what I am saying is that if you give treats for every little thing (Good boy, you came when called; good girl, you asked to go out; good puppy, you waited at the door while I got your leash; good girl, you smiled at me; good boy, you’re a dog) your dog is going to get fat, you are going to end up with a dog that poops a lot, and you are going to probably have the best, most state-of-the-art farting machine in the entire universe!

Treats should be doled out sparingly if you want to not have a dog that poops a lot and farts like crazy.

The other thing about treats is that you should be careful about the type of treats that you give your dog. Entirely too many people treat their dogs like garbage disposals. I hardly ever tell people what they should be doing with their dogs, but a couple of days ago, I grabbed a pan of fat off the floor at a friend’s house and told her, “Don’t give that to your dog!” She had cooked a duck, and ducks being very fatty, she’d poured off nearly a quart of fat during the cooking process. In this case, poop and farts were the least of my worries – I was more concerned about her dog developing pancreatitis due to way, way too much fat. She really didn’t know that she could be harming her dog until I pointed it out.

Generally speaking, you should give only treats that are approved for dogs. Table scraps and leavings from your cooking endeavors do not typically make for good treats. If your dog poops a lot or farts, the first step to correcting the problem might be to re-evaluate what you’re offering.

Generally speaking, dog obesity is going to be the result of too much energy going in, and not enough going out. If you suspect that your dog is overweight, take him to your local animal hospital to be weighed. If there is an animal hospital that charges for this service, I haven’t heard of it, so you don’t have to worry about a weigh-in costing you anything. If the scales tip too much, then consider putting your dog on a diet. It will be better for his overall health, and if your dog poops too much or farts like there’s no tomorrow, those problems will likely clear up.

What Does Normal Puppy Poop Look Like?
Interesting Things to Know about Your Dog’s Bathroom Habits (Video)
The Dangers of Not Picking Up Dog Poop

I got through the “My dog poops a lot” phase with Janice. She pretty much just outgrew it. Sometimes, though, the issue can be dietary. In very rare cases, it might be an indication of a more serious health problem. If you are concerned by the fact that your dog poops a lot, or farts constantly, though, a trip to the vet might not be a bad idea. After all, when it comes to your best friend’s health, it is always best to err on the side of caution.