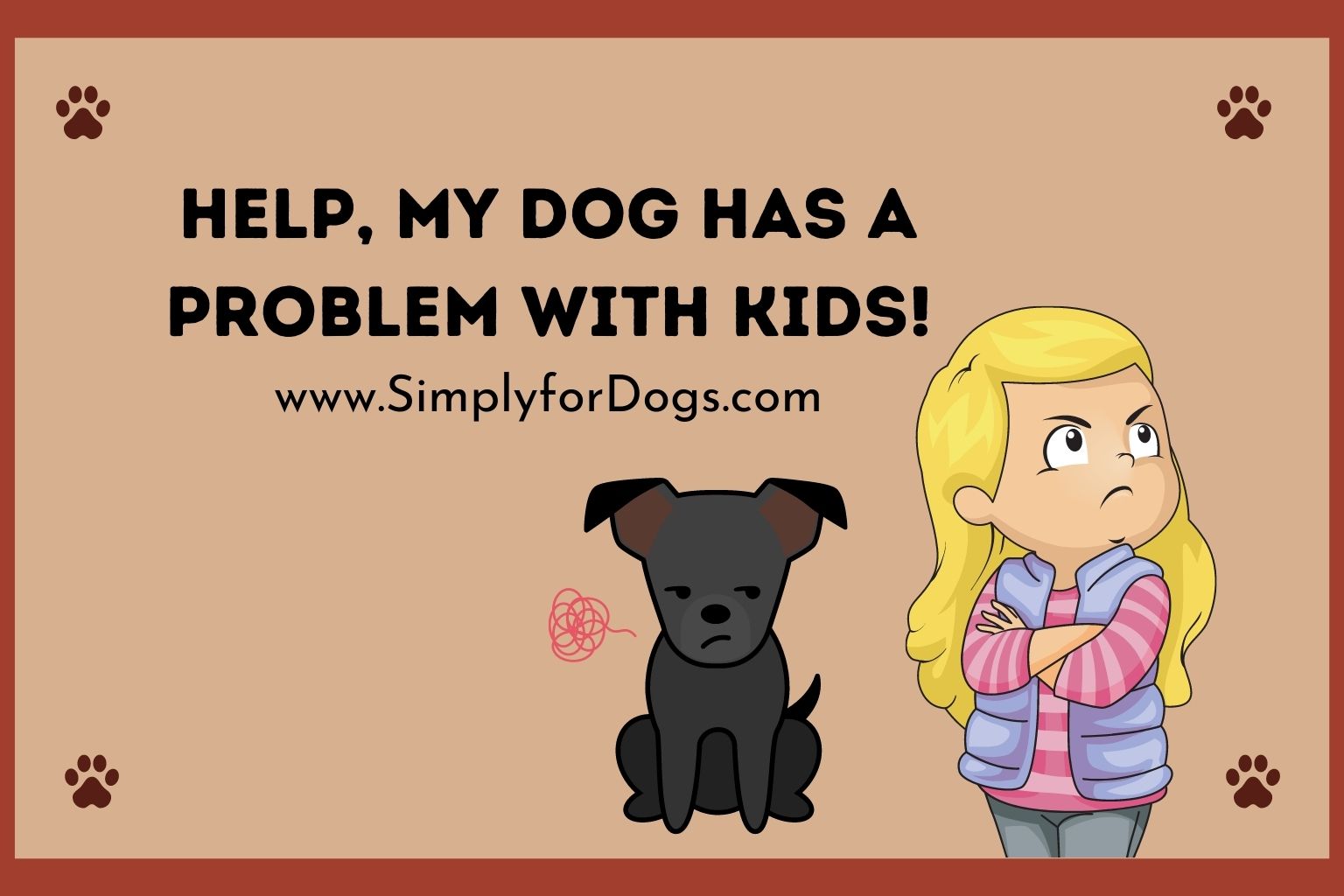 I’ve been very fortunate when it comes to dogs and kids.  Although I’ve never been all that partial to children myself, I’ve never had to sit back and say, “Wow, I think my dog has a problem with kids!” Janice and Leroy, and all the dogs that have preceded them, have been just fine with children of all ages.

So what can you do if you’re thinking, “My dog has a problem with kids?”

Well, first of all, you’re going to have to deal with it in one way or another. Usually, unless you’re so much of a hermit that it’s just you and your dogs, alone, living your life without other human interaction (which is probably not the finest idea, and maybe a topic for another post), you need to make sure that kids are safe around your dog.

Dogs Most Likely to Bite

Is it the Rottweilers? The Pit Bull types? The German Shepherds? You might be surprised to know that if a dog is likely to bite, it’s probably the family dog, regardless of breed. In other words, your problem can best be summed up with the simple phrase, “MY dog has an issue with MY kids.”

When you’re considering the temperament of a dog, first you look to heredity. If the parent is snappish, the chances are that the puppies will also be prone to “bite first and ask questions later.” Sometimes, it’s bad breeding, pure and simple – you have a breeder that’s mostly clueless, doesn’t know what to look for regarding temperament, and ends up breeding unstable dogs without actually meaningto.

Then, later on, the temperament of the dog becomes modified by various events – how much attention is paid to socializing him, how well-trained he is, and so on.Proper training and socialization will sometimes offset the effects of bad breeding, but not always.

Keep in mind, too, that some breeders will deliberately breed dogs that are known to have abad temperament. This is because they know their target market – usually drug dealers or other criminals who want to have vicious dogs for bad purposes. These breeders will sell to anyone, though – all they care about is the money. This is why it’s so important, if you’re looking for a large breed of dog, to see the parents and visit the rest of the litter as well. If Mama doesn’t let you in the yard, stay away from the puppies – they’re not a good choice.

Bad breeding aside, it’s very rare for a dog to bite if he hasn’t been provoked. The problem with this, though, is that often, the provocation might only exist in the mind of the dog. Dogs, simply stated, react to situations in the way that seems most reasonable at the time. A hug from a well-meaning child could be perceived by the dog as an assault.

Most dogs, though, won’t bite without offering some kind of warning. Sometimes, a dog that’s uncomfortable with a child will simply walk away. Another dog might growl, and possibly deliver an “air snap” – a bite that doesn’t make contact, but is intended to convey the message, “I could bite you if I wanted to, and you’re just lucky right now that I don’t especially want to.”

Many times, when you think “My dog has a problem with kids,” it’s simply that you, or your children, aren’t able to identify the warning that the dog is giving. Or you recognize it, but your child doesn’t. You might know that if a dog is growling, that could be the precursor to a bite, but a child might see it as the dog “talking.” Then, when the child continues to handle the dog, a bite ensues. The child was warned but didn’t know that he was being warned.

When a dog thinks he’s under threat, his natural reaction is going to be “flight or fight.” In other words, he’s going to either try to escape the situation or hang tough and take out the one who’s threatening him. Most dogs will choose flight. If that’s not possible, then he’ll stand and fight, no matter how afraid he is.

Now, imagine that you have a child who’s hugging or petting a dog that doesn’t want to be handled. That child is way, way past the dog’s boundaries. The dog may have growled, pulled back, or indicated in other ways that he’s not receptive to being handled, and yet the child persists. The dog reacts in a way that is, to him, normal and natural – he says “Okay. I’ve had enough, I told you several times that I don’t like this, and now there’s only one appropriate reaction.” Then, the dog bites.

The child, of course, meant no harm. But the dog didn’t know that no harm was intended. So if you’re saying, “My dog has a problem with kids,” you’re probably wrong. Your dog just has an issue with the way he’s being handled.

There are other situations where a dog might bite a child. In dogs that have a strong prey drive, running and screaming can trigger a prey reaction. Waking a dog up out of a sound sleep can also result in biting, as can disturbing the dog when he’s eating.

Any dog will bite if the circumstances are right. So, you have to be able to identify the conditions that can lead to biting. Keep in mind that a dog isn’t a human, and doesn’t reason in the same way. It doesn’t matter how kind and gentle a dog normally is, you can never predict, 100%, whether or not he’s likely to bite.

Socialization and obedience training are the best ways of ensuring that your dog is safe around children but don’t ever forget that any dog can bite. Even if your dog responds every time to commands like “Sit,” “Stay” and “Heel,” there’s no guarantee whatsoever that you won’t find yourself in the position of saying “My dog has a problem with kids.”

You know that teaching your dog to come when called can often prevent a tragedy like having him run in front of a speeding car. You also probably know that the “Leave it” command can result in your dog dropping something, like a chicken bone, that could harm him. You might never have thought of “Leave it,” though, in the context of children.

It works, though. If you think your dog is about to become aggressive with a child, a firm “Leave it!” will divert his attention back to you, and away from the child. In fact, the mere use of the “Leave it” command could prevent a child from being seriously injured by your dog.

Train the Kids Too

I think that one of the reasons I’ve never had occasion to say “My dog has a problem with kids” is that I’ve always been very vigilant about training any children that come into my home. They know how to approach Janice and Leroy respectfully, and they know when to back off. I show them how to handle the dog properly, how to interpret body language, and how to know when a dog doesn’t want to be disturbed.

I do this not because I love children – I pretty much don’t. But I love Janice and Leroy, and I don’t want them to end up in danger of being euthanized because some obnoxious little sprog pushed them too far.

If you love your dogs the way I love mine, then it just makes sense to ensure that any children that are around them know how to behave.

I know I keep harping on this in many of my posts (particularly when I’m doing the “Breed of the Week”), but it bears repeating. Don’t ever, under any circumstances, leave a child unattended with any dog. It doesn’t matter how kind and gentle the dog is, or how well-behaved the kid is, things can happen. Even the steadiest, most reliable dog can lose it if he ends up having his ears or tail pulled, or if children scream at him. Sometimes, dogs and kids just aren’t a good mix if they’re not both fully trained.

Keep in mind, too, that kids don’t always know when a dog has had enough. Just saying “Don’t bother the dog” isn’t sufficient. It’s every bit as much your job to keep the dog safe from unwanted contact with children as it is to keep your kids safe around dogs. Adult supervision is always essential.

If you want to make sure that your kids are safe around dogs, don’t just buy the first puppy that appeals to you. View the parents and get an idea of their temperament. Also, be honest with yourself when it comes to how much work you’re willing to do with the dog. If your heart is leading you toward a dog that needs a lot of guidance and training, but you don’t have the time to devote to it, then consider another breed.

Always, always make sure that you buy from a good breeder who focuses on temperament. And then work on socialization and training. If you encounter problems, then see a pro – problems aren’t going to go away on their own.

Make sure that your kids know how to behave respectfully around the dog. Very young children might not get the concept of respect, and that means that it’s your job to supervise at all times.

Kids and dogs are the perfect mix. There’s nothing so heartwarming as seeing a child playing with, or cuddling up to, his best friend. It requires common sense on the part of the adults in the family to make that happen, though. So if you’re thinking “My dog has a problem with kids,” look to yourself. You’re likely the problem.

It’s a problem that can be corrected, though, with proper training of both the dog and the children.