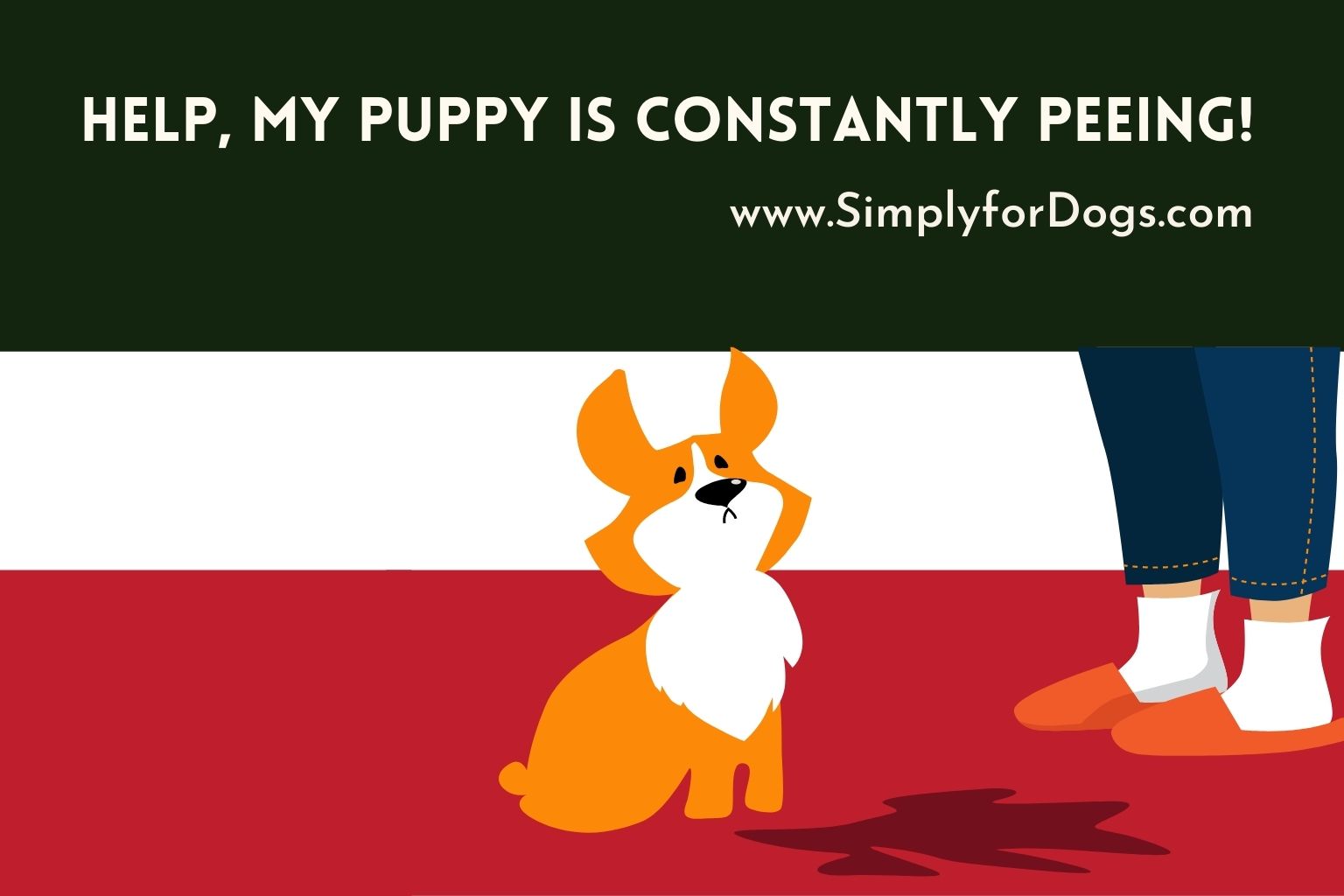 When I first got Janice and Leroy, I used to refer to my house as “The Urinarium.” I even used to answer my phone that way – “Hi, you have reached Ash’s Urinarium!” It seemed like every time I turned my back, one or the other was depositing little puddles on the floor. Thank God I didn’t have carpet, because if I did I’m sure I’d still be living with the stench!

So what is it with puppies that seem to be peeing too frequently? Are they really doing it, or is that just our perception? If you’re a compulsive neatnik, maybe every little puddle on the floor is going to bother you and you’re just overreacting. On the other hand, maybe there is a medical issue that could explain why your puppy is constantly peeing. So, with that in mind, let’s talk about all things pee, and try to get down to the bottom of the matter.

How Come My Puppy is Constantly Peeing?

Have you ever had a newborn baby, or known someone who had? Did you question why that little one was constantly soiling his diapers, or did you just say “He’s a baby, and that’s what babies do”? It’s the same with puppies. They have little or no control over their bladders, and they just let go. You can’t expect your puppy, right out of the gate and barely out of the litter, to know that he’s not supposed to pee indoors, and even once you do convey the concept to him, you can’t expect that there won’t be accidents. 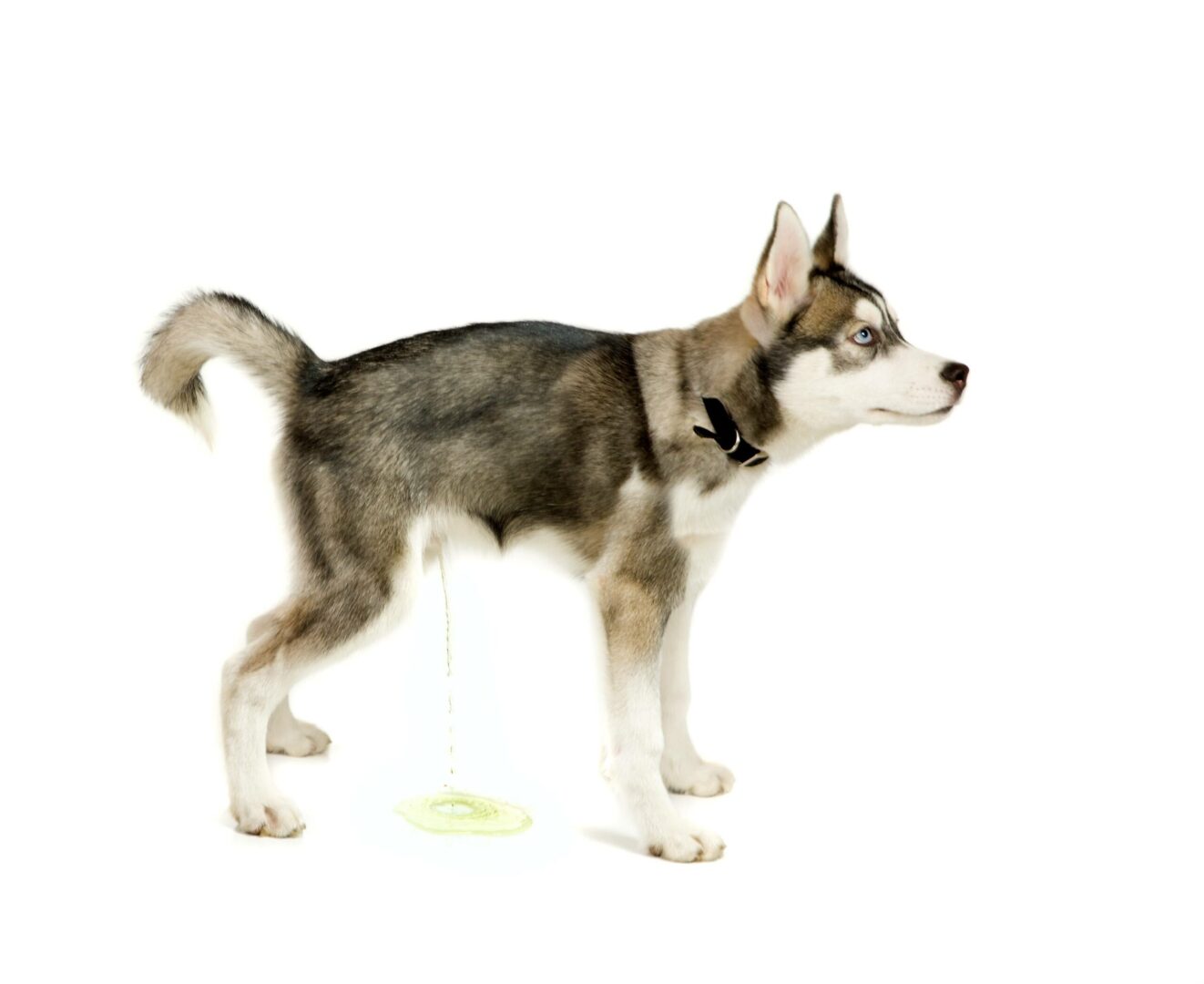 When Should I Worry?

The occasional puddle isn’t cause for concern. You do, however, need to know why your puppy is constantly peeing, and what you can do to prevent it. Barring medical issues, you can expect that your puppy will pee a lot, and will sometimes do it indoors.

Put Your Puppy on a Schedule

Dogs like stability and consistency – in other words, a routine. That’s why you need to start early on to create a routine for your dog, so that he gets to the point where it’s almost an instinctive reaction to do his business outside instead of just depositing it wherever and whenever.

Watch what’s going on – has your puppy had a drink of water? If he has, then chances are he’ll probably want to go out in about half an hour.

One mistake that people make, though, when they think that their puppy is constantly peeing, is to take him out too often. If you’re taking him out every ten minutes, for instance, how is he ever going to connect going out with going potty? Time just flows together, and there are no set times for anything.

What I’m trying to say is that even if it seems as though your puppy is constantly peeing, taking him out over and over is not making a connection. You make the connection by taking him out after he wakes up, has had a vigorous play session or a while after a big drink of water. You’re “closing the gaps,” essentially. He connects pee time with other activities in a way that he won’t if the activities are too close together.

Most of the time, if your puppy is constantly peeing, it will not be due to a medical issue. However, it doesn’t hurt to rule it out. There is a possibility that he has a urinary tract infection, or he is diabetic. Your vet can help you to rule out these problems by taking a urine sample and doing bloodwork. If your puppy has a urinary tract infection, a course of antibiotics will go a long way to correcting the problem. If he is diabetic, medication is available for that as well.

If you think that your puppy is constantly peeing for a reason other than the fact that he’s just a baby, a visit to the vet can help to rule out other problems and give you peace of mind.

My Dog Pees on My Bed!
Urinary Incontinence In Dogs: Causes, Symptoms, Treatments
11 Bully Sticks Facts: Everything You Need to Know (Video)

If your puppy is constantly peeing, it could be a behavioral issue. Usually, intact male dogs will not begin urinating indoors until they reach sexual maturity (usually at about six months). At that point, though, they will start to pee on things – they’re saying “This is mine,” “That is mine,” “This is my house” and so on. Before I had Leroy neutered, he even peed on me once – “YOU are mine!”

Sometimes, though, dogs will begin marking their territory as early as three months. Your puppy is not constantly peeing because he has forgotten his house training – he’s’ doing it because he’s developing his dominance characteristics very early on. He wants everyone to know what belongs to him, and urinating is his way of doing it. This can be one of the most difficult habits to overcome (see 11 House Training Problems and How to Deal With Them).

Your puppy might also be constantly peeing because he is anxious – does he seem to be upset when you leave the house? This is separation anxiety, and it is often accompanied by urination. In such cases, crating can help to reduce stress.

Submissiveness can also be an issue. If your puppy is constantly peeing in your presence, he might be trying to show you that he acknowledges you as the alpha. He wants you to know that he respects your authority and he will never threaten you. A puppy who is urinating submissively might also roll over on his back and expose his tummy (he’s essentially saying “You’re the boss, and you can rip out my vitals if you want to, but I hope you won’t.”)

Your puppy might also be constantly peeing because he’s just overjoyed that you’re with him – does he do it when you’ve been away for a while? If you think that’s the reason, then meet him at the door and take him outside immediately.

I’ve heard any number of people who have had trouble because their puppy is constantly peeing say “He’s doing it because he’s a spiteful little shit!”

No, he’s not. Spite is not an emotion that dogs feel. It might look like your puppy that’s constantly peeing is trying to send you a message, but most likely it’s just that he’s being submissive. Or maybe he just needs to pee! Sometimes the most obvious explanation is the correct one. Your dog is not spiteful – he wants to please you.

So, What Are You Going to Do?

There are a number of things you can do if your puppy is constantly peeing.

1. Watch the Level in the Water Bowl

Your dog does not need to have his bowl full of water all day long. Give him water regularly, but remember that it is important to let him out about a half an hour after he drinks. Most dogs only need about a quarter cup of water for each pound of their weight in any given day. Any more can lead to excessive urination.

Usually, when your puppy goes to bed for the night, he will sleep for about 7 hours before he needs to pee, much the same as you would. So, try to coordinate your sleep cycle with his. Keep in mind, though, that emergencies can occur – puppies need a bit of time to develop the muscle control that allows them to pee on schedule. Don’t’ get angry with him if he wakes you up in the middle of the night crying and whimpering – he’s just doing what he’s supposed to do; telling you that he needs to go out! Just take him out and then bring him back in, and both of you can go back to sleep.

If your puppy is under 3 months, then you can assume that he has not yet developed the ability to hold in his urine. If he needs a lot of potty breaks, that’s not unusual. What you can do over this period, though, is establish a place where he should do his thing. This is most likely going to be a certain area of your yard, so take him there whenever he needs a potty break.

Keep an eye on your dog, as well. Is your puppy constantly peeing only when you’re not observing him? Or does he pee when you come home? Is there no pattern at all? The only time you really have a problem is if you can’t clearly identify a pattern – that could be an indication of a behavioral problem, and you might have to put a bit more effort into training.

My Dog Pees on My Bed!
Urinary Incontinence In Dogs: Causes, Symptoms, Treatments
11 Bully Sticks Facts: Everything You Need to Know (Video)

If your puppy is constantly peeing, then you can restrict his water intake and put him on a schedule so that he gets the idea that doing his business outside is the right thing. If the issue is behavioral, then there are training techniques that you can use. There’s no need to have urine flying all over the place when it comes to an adult dog, but keep in mind the time-honored maxim, “As the twig is bent, so grows the tree.” What this means is that you have to deal with potty issues early on before they become entrenched in an adult dog.

Most potty issues iron themselves out naturally in the fullness of time, so if your puppy is constantly peeing, don’t scold him. He’s not trying to be bad, and he needs your love and patience.If you’re frustrated (and I understand if you are) keep it under control. Stay calm, cool and collected, and help your dog through this difficult period.

Yes, you will have to clean up messes. Maybe a lot of them. Maybe you’ll even be answering your phone the way I did, announcing to people that they have reached the Urinarium. But trust me, this will pass. It almost always does. It’s just a few puddles, no biggie.

In the early days, I seriously doubted if my two Boxers would ever be house trained. But they are. And your dog will get the idea eventually too.