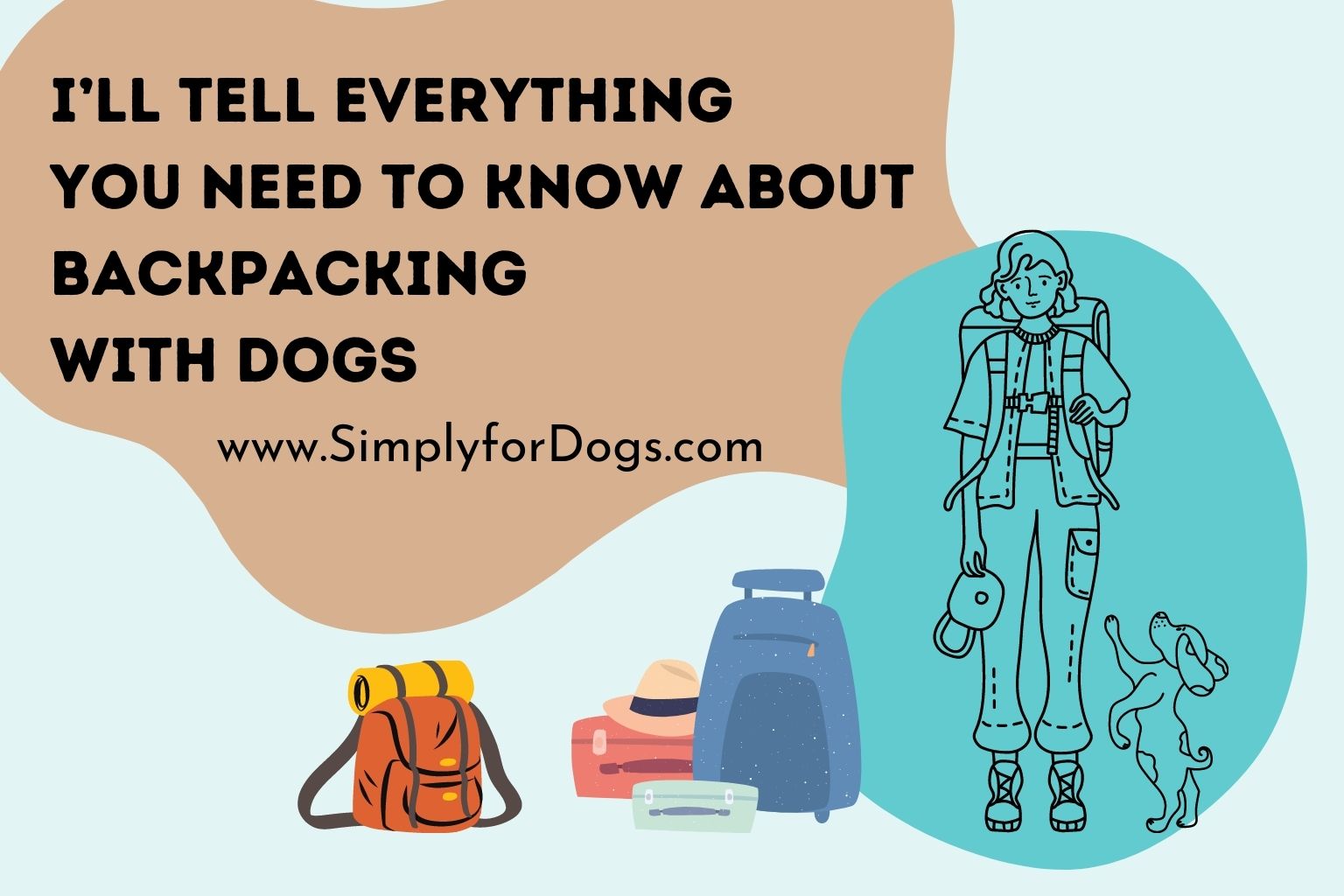 you right at the outset that I’m not much of an “outdoors” person.  I have been known to hunt (see Introduction to Hunting With Dogs), and I’m not averse to a walk through the forest, but camping and backpacking are a whole nother thing. My idea of camping is parking a fully-equipped RV at a campground that has showers, a pool and all the other amenities. Backpacking is simply not going to happen.

I doubt if my two couch potatoes, Janice and Leroy, would like it all that much either. That said, though, I do have friends who enjoy backpacking with dogs. Sofor this post, I did a bit of research, and also talked to some of my “outdoorsy” friends.

I’m told that there’s nothing to compare to backpacking with dogs. Some people actually enjoy trekking for miles, uphill both ways. It’s not for me, but if you’re the sort of person who enjoys a good wilderness trek, far be it from me to stop you!

I’ve been told, though, that the big key is preparation. This doesn’t mean just packing up all your gear and heading out – it means making sure that your dog has a good collar and tags, or even better, a microchip, in case he gets lost. You should also make sure that your dog is trained to basic obedience so that he doesn’t run off or misbehave on the trail, and that all his vaccinations are up to date in case he encounters an animal that might be carrying diseases. 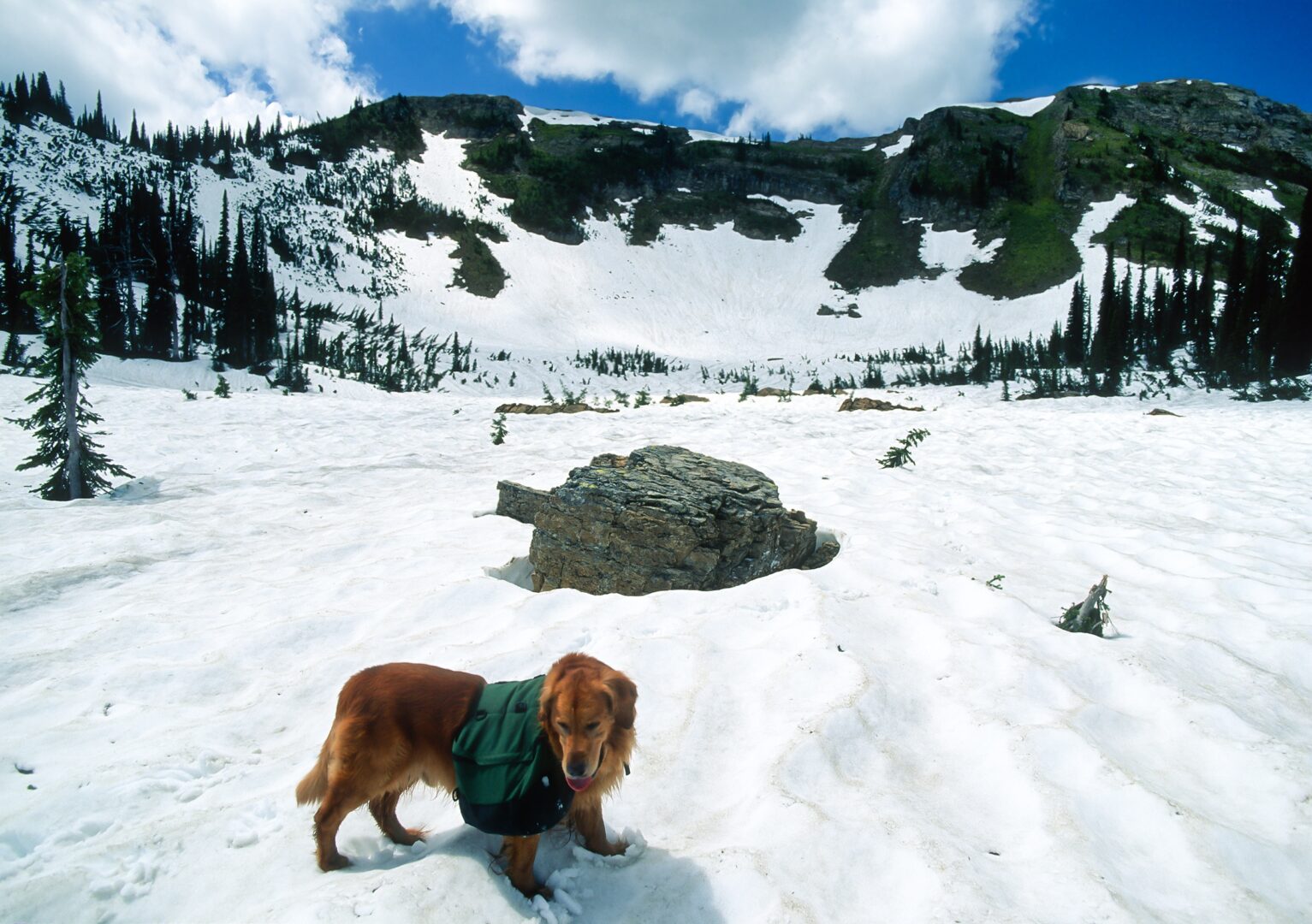 The only vaccination that you’re required by law to have for your dog is the rabies vaccine. However, there are any number of other viruses and parasites that can be highly problematic. One vaccine that you should absolutely have is an inoculation against canine parvovirus – this virus is incredibly hardy, passed from one dog to another, and even a dog that visited the same trail as you and your best buddy as long as six months previous could leave enough of the virus to kill your dog.

Canine distemper is airborne and can travel over miles, so this is another important vaccine. Other vaccines that you should consider are canine hepatitis, parainfluenza, and leptospirosis. Leptospirosis can be transmitted over land and in water and urine, and even a dog that has had the condition and recovered can leave the virus around for other dogs up to a year.

Vaccinations aren’t all that expensive, so if you care about your dog, just get them done!

You should also ask your vet about protection from heartworm and ticks.

3 Best Dog Boots for Hiking
5 Ways to Get in Shape with Your Dog
11 Steps to Help Get Ready for Holiday Travel…with a Dog! (Video)

Few dogs can handle a lengthy backpacking trip without being trained for endurance, so before you head out into the wild, start with hour-long hikes at home. This doesn’t mean just walking your dog around the neighborhood – you want to take him out over all manner of terrain so that his paws will toughen up and his heart will be up to the challenge.

Later on, you can extend the journey, but make sure that you only go as far as your dog is able in the beginning. Also, if your dog doesn’t know how to swim, this is the time to teach him, since it’s pretty much a given that when you’re backpacking with dogs, you’re going to encounter water.

Take it slow, and make it fun.

If you’re going to be backpacking with dogs, the chances are that you won’t be able to enjoy national parks – most of them don’t allow dogs. National forests usually do, though. Before you head out, find out where dogs are allowed. You might also consider purchasing a guidebook for the area that you’re considering visiting. A guidebook will give you a wealth of information as to the conditions you’re likely to encounter.

One of the most important things you’ll need is a good pack. You’ll want to be sure that it’s well padded, breathable, lightweight and adjustable. For my money, one of the best is the HDE Wilderness Backpack, available for just under $20 from Amazon. It will stand up to rain, mud and rocks, and it’s also very easy to carry, with snug straps.

You’ll also need to take poo bags with you. You might think that it’s just fine for your dog to “drop and go” wherever you happen to be, but honestly, that would be pretty rude. Even if you’re well into the outback, there’s a good chance that another hiker will come along, and it’s simply not polite to expect them to have to sidestep your dog’s offerings. So please, pick it up and take it with you, or at the very least, toss it off the beaten path.

You should also bring bowls for your dog. After all, he’s going to want to eat, and you might not always be near a clear stream where he can get a fresh drink of water.

As to food, remember that when you’re backpacking with dogs, they’re going to get a lot more exercise than they get at home. If you consider their regularration and then add half again, you’ve probably got it right.

Also, bring a first aid kit. You should include everything that you might need if you get hurt, and also supplies for fixing up broken nails or cracked paw pads on your dog. A snake bite kit would also be a good idea because you never know what you’re going to run into out there.

Bring a leash, too. It might seem quite incredible to imagine exploring the great outdoors with your dog romping happily, but there can be hazards. Just as an example, if you should happen to encounter a bear, it would be a lot better to be able to lead your dog away than to have him instigate a battle that he probably won’t win. There’s also the danger of poison ivy, poison oak, nettles and other plant hazards that might seem obvious to you, but that your dog won’t recognize. Best to keep him close to you, and safe.

The other thing is, rivers can be hard to cross – obviously, you’re going to look for the calmest stretch, but an unleashed dog might just “go for it.” A leash will prevent him from writing a check that his body can’t honor.

Obviously, at some point when you’re backpacking with dogs, you’re going to want to make camp. So, you’ll set up your tent, roll out your sleeping bag, feed and water your dog, and then probably cook up some food. When you’re done, though, make sure that you get rid of all your food waste – burn it or dump it in the water for the fish to enjoy. If you leave it out, you might as well just be putting up a sign saying “Bears, here’s the buffet!” And then you and your dog might become part of the buffet.

Get rid of all of your trash, too. Bears love garbage!

Sometimes, when you’re backpacking with dogs, you’ll end up traveling over someone else’s property. You might be wandering through a pasture or even an area that looks pretty wild, but all the same, belongs to someone else. Remember that you’re a guest, and don’t leave your trash. Don’t disturb the landscape. Every place you go, you should leave it exactly as you found it.

I’ve already mentioned the importance of leashing your dog, but when you finally arrive at your campsite, it’s even more important to keep your dog under control. There are so many sights and smells out in the wilderness that even the best-behaved dog could become distracted and wander off. Use a portable crate, or at the very least a long lead that will give your dog a bit of freedom, yet keep him under control. Most dogs have an exceptional sense of smell, but if you lose your dog in the wilderness, it’s not likely that he’ll find anything to “trace back,” and you could very well lose him forever.

3 Best Dog Boots for Hiking
5 Ways to Get in Shape with Your Dog
11 Steps to Help Get Ready for Holiday Travel…with a Dog! (Video)

When backpacking with dogs, the most important thing is to be prepared. This is a fantastic opportunity to explore the wilderness and enjoy the companionship of your dog. Just don’t head out there without having everything you need, though – which would include the right gear, a good store of food, and your loyal dog.

Have fun, and let me know how it goes – leave a comment!