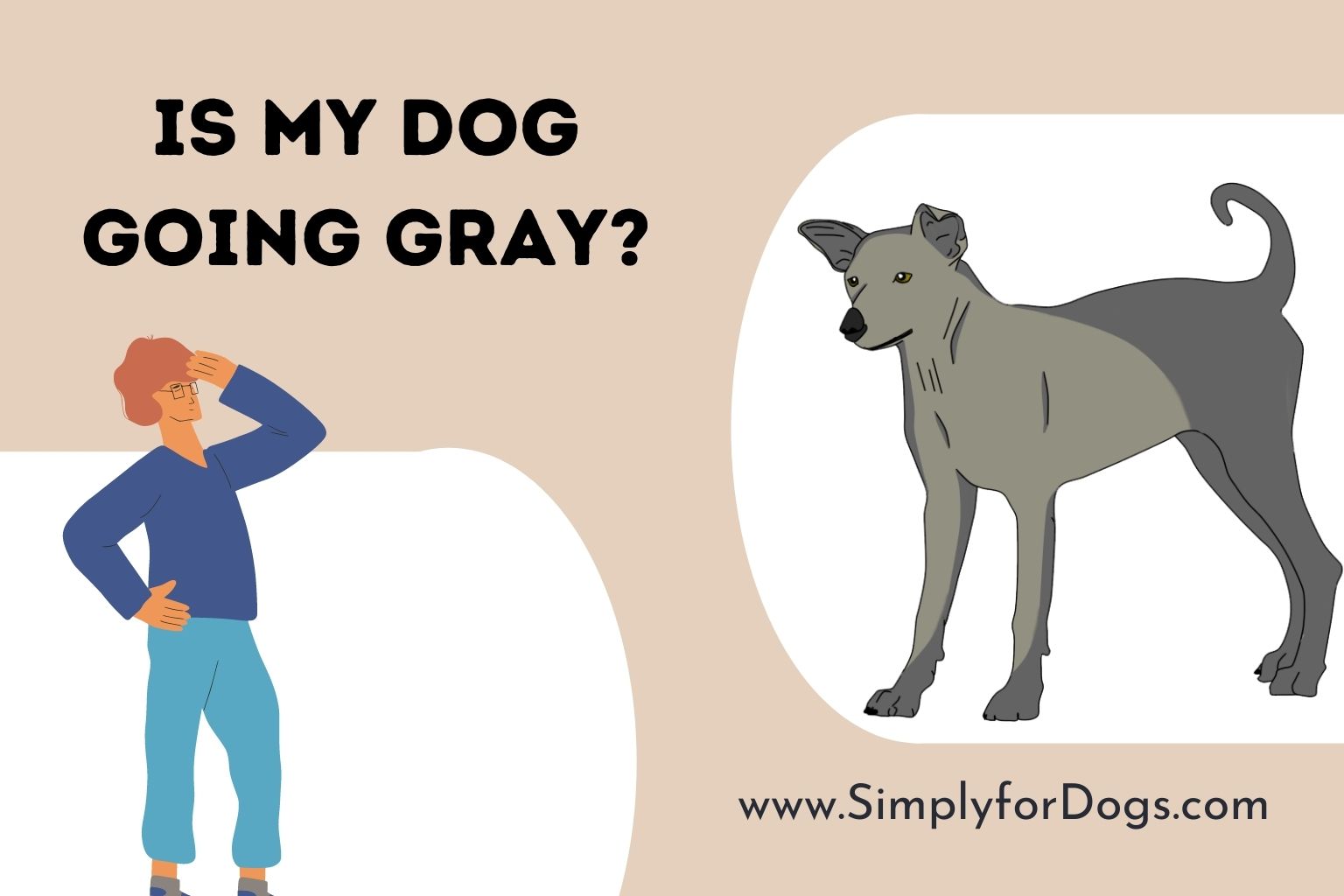 I think we can all agree that puppies are the cutest animals on Earth, but there’s something just as adorable to me about a wizened older dog with gray around its muzzle. A face like that says, “I’ve been a loyal friend for a long time”. Leroy and Janice are only just starting to show a tad bit of gray around the snout, although it’s a little early for both of them. Premature graying in dogs is actually much more common than you’d think though.

In fact, I remember a friend of mine with a younger dog, who we bumped into once when I was letting my dogs explore a new park nearby. My friend’s dog, a beautiful Border Collie named Whisper, had just turned two years old, but was already showing a bit of gray around her otherwise deep brown snout. In every other way, Whisper was the picture of health – active, energetic, smart, the proper weight, good teeth, and a hearty appetite. But my friend was puzzled by the way that her muzzle was already developing gray. Normally I’d say that the previous owner, or the vet, simply got her age wrong. But in this case, Whisper was born from a dog that my friend knew personally, and had actually been present the day of the birth.

That got me wondering exactly why dogs do seem to sometimes go gray a little earlier than we’d think they should. So I started digging, and found out that Whisper may simply be genetically predisposed to graying due to her breed. Here’s what I learned about graying, and especially premature graying, in dogs.

The Science Behind Graying

Just like in people, a dog’s hair goes gray because the cells that produce pigmentation stop performing their job. As far as I understand the research, all hair is naturally white. Melanin, the pigmentation that gives hair color, stops being produced, and the hair turns back to its natural color – or a lighter version of your hair color, if only a small amount of melanin is still being produced. So in a dog with black hair, if only some melanin is produced, the hair will look a dingy gray color.

In people, premature graying can be caused by a wide variety of things, including genetics, disease, stress, bad nutrition, medications, and being out in the environment without proper sun protection. But dogs are a bit different than we are, so what makes them go gray? As it turns out, their reasons really aren’t that different from ours.

The first and most common reason that dogs go gray is due to aging. This is the natural process by which those melanin-producing cells either die, or just stop working as efficiently. This is called geriatric graying.

7 Ways to Help an Older Dog Stay Active
House Training an Older Dog
11 Ways to Help Your Dog Make the Most of His Senior Years
Reasons Why Elderly Dogs Stop Eating
No Dogs for Seniors?
Do Dogs Really Prefer to Die Alone?

This is called progressive graying, and it’s related to a specific chromosome that only some breeds have. This is why some dogs, like poodles, will go completely gray or silver quite early in their adult lives, while others only get a bit of white at the muzzle as they age. It’s common to see most dogs start to develop a bit of gray around the age of five. The early graying gene is also found in crossbreeds, especially in dogs with terrier or collie in them.

So, while aging is the primary cause of graying in dogs, some dogs can start to show these signs faster, just like humans. But it’s good to know that not all dogs with gray at the muzzle or in the face are older. Some dogs can start to show this trait around two years old, just because of their breed. If you’re really wondering how old a dog is, you’re better off looking at their teeth than the color of their coat.

It hasn’t been completely proven yet, but there is ample evidence for the idea that stress causes premature graying in dogs. A study reported in Scientific American recruited 400 dogs from the ages of one to four years, and asked their owners about their lifestyles. The questions were hidden within other random questions about the dogs, so that no one had any idea what was actually being studied. Then pictures were taken of the dogs, and they were rated on a grayness scale.

What the study found was that dogs who were reported to behave anxiously the most often, or who exhibited a lot of impulsive behaviors, fear of unfamiliar people, fear of loud noises, and similar behaviors, were also scoring the highest on the grayness scale in their age range. The study is very interesting because it could mean a new way to help diagnose behavioral issues in dogs from an earlier age, and get them better training and help.

The study didn’t show any correlation between the dog’s size, sex, or whether the dog was spayed or neutered, meaning that the results really did show at least some connection between premature graying and stress. If your dog tends to jump on people despite being trained not to, if they suffer from storm anxiety, if you have a hard time introducing them to other dogs or people, or if they tend to have accidents when excited, they may start developing gray earlier than you may expect.

The third reason that a dog may get gray prematurely is due to medical issues. This is a very rare occurrence, but it does happen from time to time. The most common medical issue that can cause changes in a dog’s coat is hypothyroidism. This disease can cause more than just premature graying. You may also see balding, the hair may get coarser, your dog’s skin may develop dark patches, and the muzzle may go gray prematurely.

Other medical issues that may cause graying include autoimmune disorders like pernicious anemia, diabetes, and hyperthyroidism. Taking certain medications can also cause graying.

Additionally, if a dog has nutritional issues, they could develop premature graying. For example, if a dog has a severe lack of iron, protein, folic acid, or vitamin B12, they may start to go gray very early. Malabsorption syndromes, which are medical conditions that prevent the dog’s body from absorbing certain nutrients properly, are usually to blame for this. These are extremely rare, however.

Finally, certain allergies may also cause a dog to develop gray around their muzzle. If you think that your dog has a medical condition, and is going gray due to that, it’s best to head to the vet to get everything checked out. It’s likely that the vet will tell you that your dog is simply graying prematurely due to genetics, or worst-case scenario, that they are very stressed. A medical condition would be very rare indeed, which is good news for any concerned pet owners. 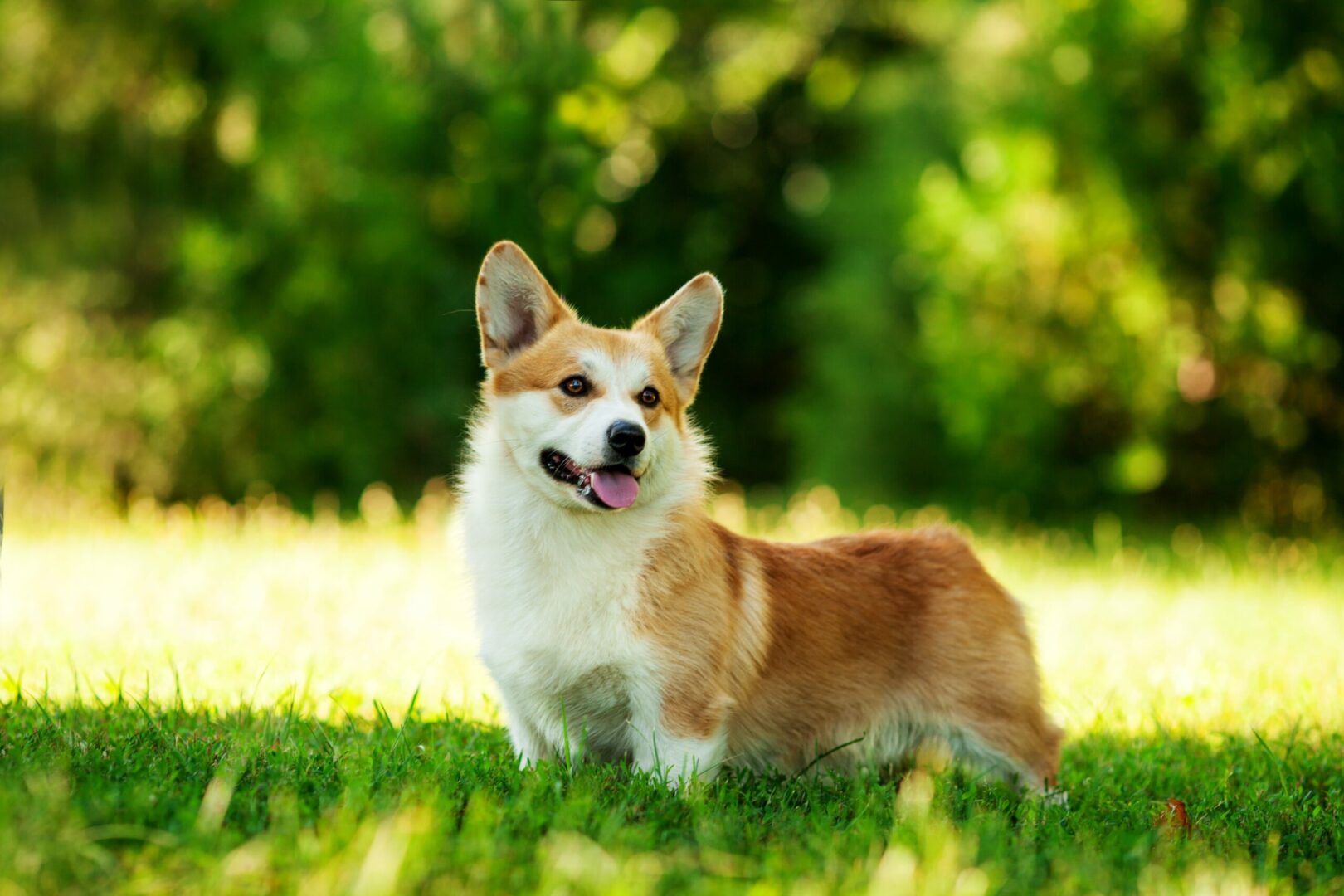 Whether your dog is going gray prematurely or not, keeping their coat healthy is part of being their owner. Even graying hairs need to be regularly cleaned, groomed, and kept clean. What kind of cleaning and grooming you need to do depends mostly on the breed, but even very clean breeds still need some care.

A healthy dog coat can look gray, but will still have these qualities:

For most dogs, brushing is the key for keeping them clean and hygienic. Long-haired breeds like Pomeranians, Border Collies, and so on, need to be brushed more than once a week. Dogs that have thick undercoats that shed, need to be brushed at least once a week. Short-haired breeds can probably go a week between brushings, but it’s still important to keep them groomed regularly.

Janice and Leroy love their regular brushings, and it helps cut back on the shedding. I personally swear by this FURminator dual brush, because it works great for the type of hair that my dogs have. However, breeds with long coats need something with longer and wider-set bristles, to reduce pulling. This one by Safari is a great choice.

Bathing is a little bit controversial with dogs, believe it or not. Most people want to bathe their dogs for two reasons: to get rid of bad smells, and to keep the dog from shedding dirt and other outside debris around the house. But over-bathing a dog is actually bad for its skin. Dry skin and irritation are common in dogs that get too many baths. Once a month is more than enough for a dog. If you have a very smelly dog, you may want to try a natural deodorizer in between baths. I’ve used Wahl on Janice and Leroy before, and it works great. I like that it has nothing but some essential oils in it, and doesn’t harm their skin at all.

When you do give your dog a bath, it’s best to use a very simple dog shampoo, with as few ingredients as possible. Baby shampoo is a great option because it’s gentle and doesn’t irritate skin. However, it also won’t get off a lot of heavy dirt and grime, so if your dog tends to get into mischief, you may need something stronger.

Finally, your dog’s nutrition can have an effect on the health of their coat. I remember when I was younger, before I knew much about the science behind dog nutrition, that people would recommend giving dogs some leftover fats, like bacon grease, to make their coats shiny. While that certainly does work, just remember that a lot of human food isn’t good for dogs.

Hair is primarily made up of protein, so first and foremost, your dog needs plenty of protein for a healthy coat. If the dog food you use doesn’t have meat as the first ingredient, or at least one of the top three, you may need to switch if you notice their coat getting dry, dull, balding, or just looking unhealthy at all. Another thing that is really good for a dog’s coat is fatty acid. If your dog has dietary issues that make it hard for them to eat solid foods, there are other options. For example, Grizzly Pollok is a company that makes different oil supplements, such as fish oil, which is high in fatty acids. This can be added to a dog’s water or soft food, or even just squirted into their mouths if need be, so that they can keep up healthy skin and a healthy coat.

The final verdict here is that for most dogs, going gray isn’t a problem. It’s likely genetics, breed characteristics, or a high-strung personality – or a mixture of the three. If you are really concerned about your dog’s graying snout, the best things to do are:

If none of that seems to be the culprit, then a trip to the vet may be in order to check for medical conditions.

7 Ways to Help an Older Dog Stay Active
House Training an Older Dog
11 Ways to Help Your Dog Make the Most of His Senior Years
Reasons Why Elderly Dogs Stop Eating
No Dogs for Seniors?
Do Dogs Really Prefer to Die Alone?