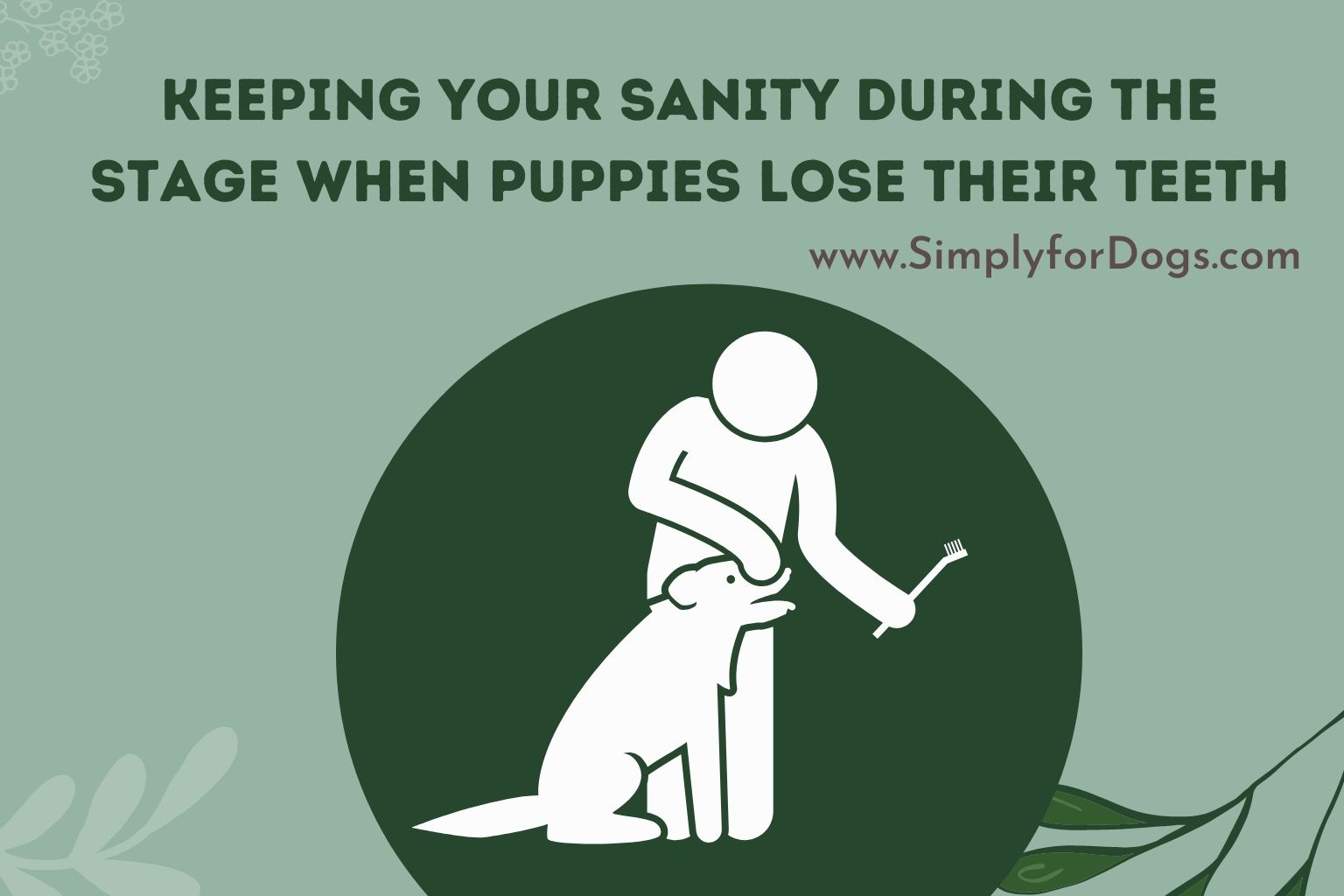 There’s nothing any more wonderful than a puppy, unless maybe it’s an adult dog that you’ve raised from puppy hood and watched develop from a little bundle of rambunctious curiosity into a beautiful adult dog who loves nothing more than to share your life. The thing with puppies, though, is that in their “babyhood” they can be beyond destructive, and those needle-sharp little teeth can shred up your belongings and cause you a fair bit of discomfort, too.

So, when do puppies lose their teeth?

Sometimes, it seems as though it’s going to take forever for those little baby teeth to fall out and, in the meantime, you, and everything around you will end up being chewed! Puppies are no different from human babies in this regard. They go through a teething period that seems to last forever, and you might think that if it doesn’t end soon, you’ll just go out of your mind!

Take heart, though. It just seems like forever. Now, since knowledge, supposedly, is power, let’s take a look at the facts about puppy teeth, when puppies will lose their teeth, and how you can deal with this phase in your puppy’s development while keeping your mental health intact.

About Those Baby Teeth

Of course, dogs are very different from humans, but one of the ways in which they’re essentially the same is that both puppies and humans will have two sets of teeth over their lifetimes: baby (or deciduous) teeth, and adult, permanent teeth. If you think that, from what goes on during the chewing stage, dog babies must have more teeth than human babies, you’re right. Humans have 20 baby teeth, and later on, 32 permanent teeth. Puppies have 28 baby teeth, and ultimately 42 permanent teeth.

By the time a puppy is two or three weeks old, his teeth will begin to appear. The incisors come first, and then the canines and premolars. There are no molars early on. These young teeth are often referred to as “milk teeth,” and they’re very, very sharp!

About Being “The Adult”

I’m not exactly sure if this is one of those “digressions” that I always seem to be inserting into my posts but having just mentioned that your puppy’s baby teeth will be very sharp, I want to also mention that this is a time in your puppy’s development when you will need to be very patient. It’s pretty much a given that, at some point, your puppy will grab your hand, or your ankle, or some other sensitive part of your body, and it will hurt, and blood will most likely be drawn.

I know that you’re only human. So am I. And I will freely admit that there have been times when I’ve literally pulled back my hand in mid-air because my immediate, instinctive reaction has been to want to deliver a slap. Somehow, though, I’ve always managed to remind myself that a puppy is just a baby, that I have to be the adult, and that it’s just so horribly, horribly wrong to hit a baby.

So please, be gentle. There will always be a period before puppies lose their teeth, and later when the adult teeth are coming in, when no amount of loving correction, or offering something other than your sensitive flesh to chew on, is going to work. It will pass, though, so don’t destroy your puppy’s trust in you by failing to be “the adult” in the relationship. Just live with it, and know that it will pass.

WHEN? Is it EVER Really Going to Pass?

Yes, trust me on this. At some point, usually around 14 weeks, puppies will begin to lose their baby teeth. That’s the good news.

The bad news is that the stage goes on until your puppy reaches the age of about 30 weeks.

It’s not forever, but it sure can feel as though it is.

How Come I’m Not Seeing Teeth?

If you think that you’re going to be able to gather up your puppy’s baby teeth, put them under the pillow of his little doggie bed, and then wait for the doggie tooth fairy to trade them for rawhide chews, you’re probably going to have a long wait on your hands. Chances are that you won’t find the teeth, because much of the time when puppies lose their teeth, they simply swallow them.

Don’t worry, though; that’s not going to cause your little guy any harm.

You might notice a tiny bit of blood when puppies lose their teeth, but again, this isn’t anything to worry about.

If you keep a close eye out, though, there’s a remote chance that you might notice a tooth falling out. Sometimes, a puppy will shake his head when a tooth is about to be dislodged. And if you’re one of those people who likes to keep “memories,” you might actually be able to scoop a puppy tooth up off the floor and then, oh, I dunno, maybe tuck it in a locket or something.

Why Are Those Teeth So Sharp?

As I’ve already suggested, you could be in for a lot of pain when those little teeth start coming in. But why, given that your puppy is on mother’s milk for several weeks, and then on puppy chow that really shouldn’t be all that hard to chew, do those teeth need to be like little daggers?

It actually goes back to your puppy’s ancestry. Wild dogs didn’t have the luxury of a bowl full of commercial dog food that was easy to chew. They had to be able to tear through tough meat and bone from prey animals in order to get it to the point where it could be chewed and swallowed.

The sharp teeth may have also carried through to modern times as a means of helping the bitch to wean the puppies. You know how it feels when the little guy grabs your hand, so just imagine how the bitch feels when those little needles are latched onto a sensitive teat!

As part of the weaning process, the mother is going to begin to push the puppy away from the teat once nursing becomes uncomfortable for her. Then, the puppy will quite simply move toward another source of food: the bowl of puppy chow that you have provided.

But WHEN is He Going to STOP BITING?

Settle down; all things will happen in the fullness of time. You might think that the constant nipping is something new, but it isn’t. The reality is that the nipping would have been far worse when your puppy was still with his litter mates. As the puppies begin to grow up, the rest of the litter will begin to push the worst of the biters away; they begin to learn that biting might not always be taken kindly.

So, by the time you take your puppy home, much of the biting behavior has already been worked out, and you’re actually just getting the last of it. That’s where you step in, and continue his education. You don’t want to punish him, but when he nips, you do want to pull away. In this way, he learns that when he bites, there will be no more play. It’s just that it takes a puppy a while to get the concept.

Oh, and by the way: yes, it will hurt, and yes, you will bleed. But keep in mind that your little buddy doesn’t really have a whole lot of jaw power in the early stages. You’ll bleed, but you won’t bleed to death, so suck it up. There is an end in sight.

It’s Harder on Your Puppy Than It Is on You

If you’ve ever had to live with a human baby that’s teething, you know that it’s not easy on him or her. It’s the same for your puppy. He’s experiencing discomfort, and you can tell that this is going on if you notice that he’s not eating as much as he once did; this is because it hurts to eat. When he chews, it’s his way of trying to ease the pain of teething.

This is the phase, before puppies lose their teeth and the adult teeth come in, that chewing will be most problematic. Really, all you can do at this stage of the game is take away the things that you don’t want your puppy to chew, and give him things that it is okay for him to chew. If you don’t want him destroying your shoes or your furniture, give him small toys like balls, soft rubber rings, or rawhide chews to help him satisfy his need to gnaw.

As the adult teeth begin to come in, you’ll probably want to offer harder toys. This is because your puppy’s jaw is beginning to grow considerably stronger, and that’s the stage where he might move to deciding that the legs of the antique sideboard you inherited from your grandmother would be good to chew. You’ll probably be able to identify this stage easily, because he’ll begin to destroy his “baby” toys.

Ensuring That the Adult Teeth Come in Normally

When puppies lose their teeth, their humans are usually really happy, because even if they’re still being chewed upon, the bite is a lot less sharp. This is the point, though, where you should begin watching to make sure that the adult teeth are descending as they should.

Ideally, puppies should lose their teeth – all of them – by the time they’re six months old. If your puppy still has baby teeth at that point, it would be a good idea to arrange an appointment with your veterinarian. Even better, see your vet as soon as the baby teeth come in.  You might find that you need to have a couple of baby teeth taken out in order to allow the adult teeth to come in properly, but the procedure will be far less expensive if done early on than if the condition is left to worsen.

Dealing with puppy teeth can be a pain, for both you and your little friend, but keep in mind that it’s not going to go on forever. Your puppy’s teeth won’t always be like little knives or needles. So be patient, be kind, and know that the stage doesn’t last forever. Puppies will lose their teeth, and then you can put away your BAND-AIDs and enjoy the companionship of a good dog. All things in the fullness of time.