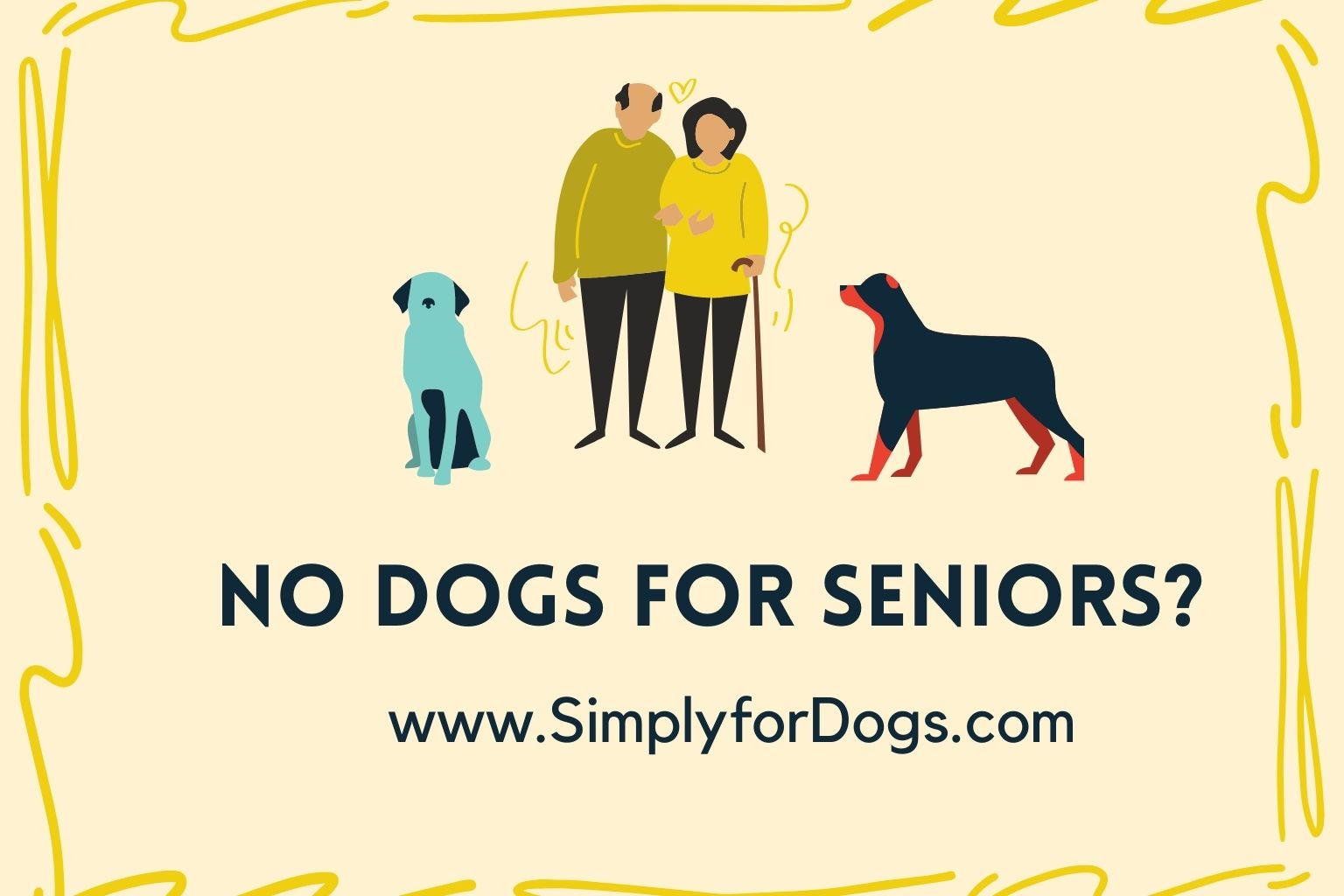 On my last trip down to the dog park, I was greeted with the news that my friend Debbie (mom of Chuck, the overweight beagle) is going to be adding to her family. It seems that Debbie’s grandmother is no longer able to live on her own, and she is entering an assisted living facility. Debbie is going to take her grandmother’s miniature Schnauzer, Dingus, home with her.

Okay, I don’t know where Debbie’s grandmother came up with the name. I don’t really like it, and neither does Debbie, but hey, it is what it is, right?

So, that got me thinking about seniors and dogs. I mean, not everyone has someone like Debbie in their lives, so what happens to dogs when seniors are no longer able to care for them?

A lot of the time, when seniors can’t care for their animals any longer, they end up in shelters if there are no family members available to care for them.

There’s a flip side to this, too, though. Just as an example, one of my neighbors is in her 70s, and she just recently lost a dog to old age. My neighbor is “young 70s,” and she’d love to have another dog, but her position is, “What if I outlive the dog?”

I sort of talked her around that, because she does have family who would take the dog if she died. So, she had her mind made up to get another dog, but when she went down to the animal shelter, they refused to give her one on the basis that she could outlive the dog. And even though she pointed out that she had plans in place for the dog if she should pre-decease him, it was still “no go.”

I find this beyond sad. Elderly people should be deprived of the joy of owning a dog because they might outlive it? I don’t know about you, but from where I’m sitting, this sounds a lot like age discrimination.

It also flies in the face of the conventional wisdom, which suggests that elderly people can benefit in huge ways from having a pet. Often, the elderly are socially isolated, and they’re very vulnerable to depression, but less so if they have a pet. Studies show that having a cat is helpful, but having a dog is even more beneficial.

The benefits to seniors who have pets aren’t just psychological, either. Seniors who live with pets usually get more exercise, and therefore require medical services less often. They’re also more likely to follow their doctor’s recommendations (maybe because they’re concerned about dying and leaving their pet alone), and are less stressed. There are even studies showing that seniors who have had heart attacks live longer afterward if they have a dog.

But What if They Die?

Of course this is what we keep coming back to: what happens to the dog if his human companion dies? Well, the reality is that although a senior dog owner is more likely to die before his dog does than a young owner is, there are no guarantees. A young dog owner could also die from a heart attack, or get hit by a bus. And young dog owners are no more likely to have someone on standby to take the dog if something happens to them than are old dog owners. So where are you going to draw the line? Are you going to say that if you’re over 60, or over 70, or I dunno, just pick another age at random, and say “That person shouldn’t have a dog”?

This argument really doesn’t hold a lot of water. In addition to dying, a pet owner could become incapacitated, and still unable to care for their dog. Also, it assumes that seniors are inherently fragile and unable to care for animals. I think the truth is something very different. Seniors often live alone, and will form such a strong bond with a pet that they’ll actually go out of their way to make sure that it’s properly cared for. I also think that seniors have a very good sense of their own potential mortality, and will likely do everything that they can to ensure that their pet is provided for in the event of their demise.

This is ageism, pure and simple. And if you wanted to flip the argument on its ass-end, you could offer up the theory that millennials are so self-absorbed that any pets they have will suffer because their owners are totally wrapped up in themselves. This is ageism, too.

Anyone, of Any Age, Should Have a Dog

I’ve pretty much always had dogs, except for a brief period when I was living in a low-rent apartment with a cat for company. When I was a kid, I had a dog, and I always looked after him. My parents never had to tell me to walk or feed him. Jake was my best friend, and I took care of him. When I was in my early decades, I had dogs. Now I’m a bit older, and I still have dogs. I’m not ready to start pushing up the daisies just yet but I suspect that when I do get to that point, I will still have dogs. I’ll make sure, though, that I have a plan in place in case I should end up dying before they do.

To my way of thinking, denying seniors the right to have a dog or other pet s unspeakably cruel. Would you tell your grandmother, “Okay, you’re coming to the end of your days, so you can’t have friends anymore, and you can’t have anything that might bring you joy or comfort”? Of course you wouldn’t. So why shouldn’t seniors have dogs?

I have a lot of friends who are up in years, and I’ve seen first-hand how happy they are when they have dogs. Part of it, of course, is that it gives structure to their lives. The dog has to be walked, fed, groomed, and taken to the vet from time to time. Then there’s also the pure pleasure that’s to be had from tucking into bed at night and having your best friend cuddled up beside you. Then, in the morning, you have a reason to get up. You might have lost your life partner, and your kids might have moved away, but your dog is still there.

We Don’t Have the Right

From where I’m sitting, we don’t have the right to tell the elderly that they can no longer have dogs. It’s the same as saying: “You’re no good anymore; you’re not even fit to look after a dog.” How hurtful is that?

And if you think that’s hurtful, imagine the hurt of sitting in an empty house, every day, with no companionship. Just furniture, and walls, and maybe a television. Now, imagine doing this day after day, year after year, while you just wait to die. I don’t know about you, but I’ve never known that kind of psychological torment, and I hope I never do.

Shelters Need to Get on Board

In Reasons to Adopt a Rescue Dog, I talked about animal shelters that aren’t really “no kill.” Some shelters say that they don’t kill animals, and technically it’s true, but they often shuffle animals off to veterinary clinics to be euthanized if they’re not adopted. My position on this is that any life is better than no life at all. So rather than euthanize perfectly healthy dogs, why not let them have even a few years with a senior who will love them and care for them? Even if the dog is not adoptable after the senior passes, he will still have had a good life for a period of time.

Also, if animal shelters are all that worried about a dog being left behind after a senior dies, they could always insist that when a senior adopts an animal, they provide the name of someone who will take the pet in the event of their demise. Most seniors, I think, would be able to identify someone who would do so. And if the animal shelter won’t allow that, then it’s not doing its job, it’s not compassionate, and it is completely disregarding the benefits that a senior can bring to an animal, and an animal can bring to a senior.

That kind of attitude is cruel to seniors, and cruel to dogs as well.

Many of my stories come from my dog park. I was there a few days ago, and encountered a very old man. Of course, I didn’t ask his age, but I think he would probably have been in his mid-eighties. He was walking a very exuberant Irish Setter puppy, and I started doing the math in my head. I figured that the puppy would probably live for at least nine years, and I was very much hoping that this old man had support in place.

He did. And I found out because I’m nosey and intrusive and I asked, “What happens to this puppy if you… um… well…”

The old man said “If I croak? Well, my daughter will take him. I wouldn’t have adopted Rufus if I didn’t have a plan.”

So that’s where it sits. Seniors need to have a plan for their dogs, and I think most of them do. If we assume that they don’t, then we’re being pretty condescending and assuming that old folks are clueless.

Seniors should be treated just like the rest of us. We should assume that they know how to take care of their dogs, and that they do have a plan in place. And then they should be allowed to live out their days in the company of a loving dog. It’s right and fair. To deny someone in the twilight of their days the loving companionship of a dog is simply wrong.