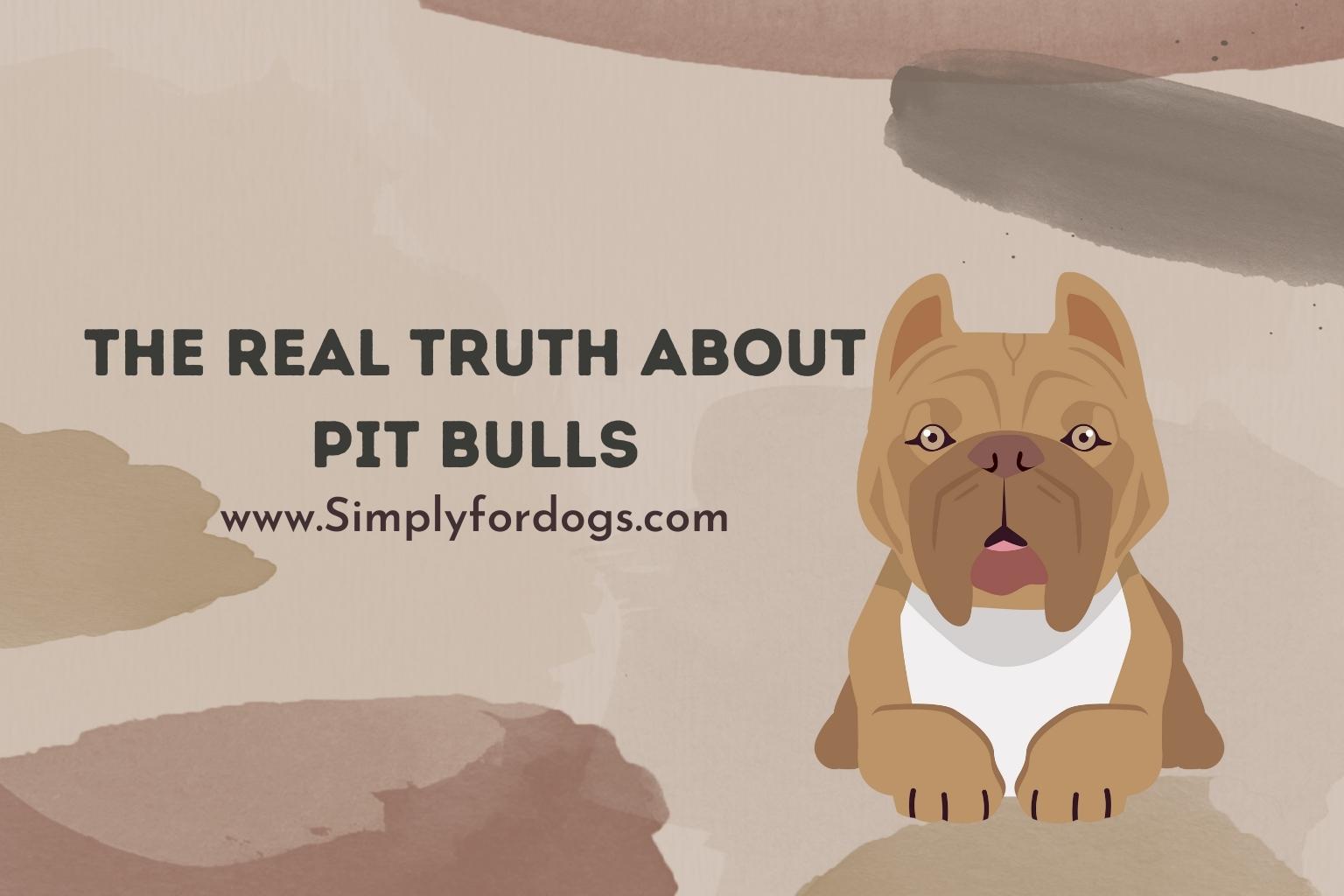 Pit bulls are fighting dogs against other dogs and many other large animals, such as holding and biting bears and bulls. This dog breed is not intentionally developed against humans. Unfortunately, many myths have been developed on a mass level, and the majority of the people consider these dogs harmful.

The facts are hidden and not prevalent among people. Pitbull breed can be a good breed, and it is. These dogs can be adopted, trained, and domesticated.

What Is Pit Bull?

American pit bull terrier, also called pit bull, is a fighting dog that is developed through breeding in Scotland, England, and Ireland in the 19th century. The American Kennel Club explains that it is not a pure breed of dogs. Instead, it is just like a normal dog but with more fighting capacity and capability than other dogs.

These pit bull dog breeds are named historically, including Staffordshire Bull Terrier, American Staffordshire Terrier, and bull terrier. Pit bulls are generally bred as fighting dogs and aggressive dogs against other dogs. But it does not mean they are openly developed against humans.

Like normal domesticated dogs, pit bull-type dogs are quite loyal, dedicated, and loveable. When they are loved, they love you back; when they are given the attention, they become loyal to you in the same way the other dogs do.

Facts and Myths About Pit Bulls

As pit bulls are developed as fighting dogs because of their aggressive behavior, these dogs are being used negatively by many irresponsible dog owners. They use them against humans. In this way, a negative image has been built against pit bulls by these irresponsible pit bull owners. Myths have been established, and these myths dominated the facts. As a result, many people misunderstand these dogs, so they negatively judge and treat this dog breed.

Pit Bulls Are More Aggressive Than Other Dogs

Pit bulls are developed as aggressive dogs against other harmful dogs, but being used against humans has negatively impacted this breed’s reputation. Aggression is a trait that is not specified by the breed. This trait varies from dog to dog. Every dog carries its own specific behavioral characteristics. These behavioral predispositions are natural.

Another prevalent myth is that pit bulls cannot be trained. This is because they cause human fatalities and cannot be domesticated. But it is not what it looks like. Pitbull breeds can be trained and domesticated like other breeds of dogs.

No doubt a pit bull is not easy to train, but it does not mean that they cannot be trained. This training takes time. But the, pit bulls have proved that they can excel in search-and-rescue, tracking, and agility through dog training.

Behavioral training can also be given to them. They are good and active learners but take time. Even the trained pit bulls are safe with children, and these have also been used as nanny dogs.

The average bite pressure of a domesticated dog is 320 pounds of force. Therefore, an experiment was conducted by Dr. Brady Barr. He took three famous breeds of dogs: American pit bulls, German shepherds, and Rottweilers and tested their bite pressure.

Pit Bulls Can’t Get Along With Other Animals

Each dog carries its own behavior, and again the behaviors do not depend upon the breed of the dog. Pit bull-type dogs do not easily find comfort with others. Some dogs love to play, spend time with other animals, and become friends. On the other hand, some pit bulls do not like to share anything with others and do not want to walk along with others. They love to live alone and feel comfortable in this.

Another myth is about dog bite-related fatalities. The Centers for Disease Control and Prevention revealed that 4.5 million dog bites are reported each year in the U.S. Among this large data of dog bites, there are only 20 to 30 bites that prove fatal.

In the past, it was shown in studies that pit bulls cause more dog bite injuries as compared to other dogs identified. The dog bite fatalities come more from pit bulls, and fatal attacks come more from Rottweilers and German shepherds.

But in 2000, the Centers for Disease Control and Prevention revealed that dog bites and their fatalities are not specified on the dog breed basis.

Adopting a Pit Bull Is Just Like Adopting Any Other Dog

Pit bulls can be very friendly if they are trained well. However, it is not easy to adopt a pit bull because, in many areas, breed-specific legislation bans the pit bull. This creates a hurdle in adopting a pit bull. In addition, pit bulls are difficult to train, and due to their negative image, people fear to adapt them.

It would help if you researched thoroughly before adopting a pit bull. Then, you can train him to be friendly by adding him to your activities, by showing affection, and by the care. After that, you can become best friends, but it takes time.

Again it is a myth that pit bulls are trustless because they harm humans along with animals. It is a truth that every dog is different, and it does not depend on the breed. The dog can be inherently dangerous or show aggressive behavior due to fear, fight, or due to other reasons.

Shelter staff also witnessed that pit bulls, and many other dogs are kept in shelters other than aggressiveness. Such as the owner does not find the time to look after his pet, so he sent the dog or his pet to a shelter.

According to breed-specific legislation, pit bulls are banned in many areas and in many countries. A myth has been established that this legislation has decreased the number of dog attack cases too much extent. But it is not the truth.

ASPCA has conducted studies, and these studies revealed that in eight countries where the Pitbulls are banned, have not got any considerable change in dog attack reporting. These countries still get the cases reported about dog attacks and dog bite injuries.

Pit Bulls Are Dangerous Because They Are on a Bsl List

BSL bans many dog breeds, including pit bull terrier, Dogo Argentino, Japanese Tosa, and Fila Brasileiro. According to this legislation, these breeds are involved in human attacks, serious bite injuries, and fatalities, so these are not suitable to be bred and kept at the home.

The ASPAC, the Humane Society, the AKC, and many other organizations are against this law. Due to this, the pit bull is considered very dangerous, but it is not so. This is a false security sense. People consider them harmful due to biting, but any can bite. It is not the breed that specifies it.

Due to the ban on pit bulls, they are considered high risk for others. People consider that these are ruthless killers not only of other animals but of humans too. Their aggressive nature has been portrayed negatively in the minds of people. Killing the dog involves multiple factors. It is very likely the dog is fearful of others, he might get few chances with human interaction, or he had not been taught or trained.

English bull-baiting dogs were used for baiting large animals. Pit bulls are closely related to the family of English bull-baiting dogs. Pit bulls are developed as fighting breeds initially, without any doubt, against large animals. But these breeds are not developed to cause trouble to humans even though these breeds are not doing so.

Now the pit bulls are bred for companionship, not for fighting only. These are loveable, loyal, and generous to others.

Pit bulls are fighting dogs for other animals, aggressive dogs for other dogs, but companions for humans. Therefore, all the myths are baseless, and the facts are quite different from what the people think about pit bulls.