In Removing Dew Claws from Dogs – Should You Do It? I talked about the reasons (and lack thereof, sometimes) for removing dew claws from dogs.

I think we can conclude that some people are going to consider the practice barbaric, while others are going to offer reasons why it should be done. Sometimes, the reason for removal of dew claws in puppies and adult dogs is simply to prevent the possibility of injuries later in life, when dew claw get caught on things and torn.

I’m not saying you should do it, or not do it. I don’t, because I believe that dew claws are important for a dog’s balance, and I tell people who buy puppies from my litters that they will come with their dew claws intact, and that I would prefer that they not choose to have them removed. If you really feel that the cosmetic appeal of missing dew claws is important, then probably in the grand scheme of things, removing the dew claws is on the low end of the scale when it comes to things that you can do to harm your dog.

I still don’t recommend it, though.

If you’ve read Removing Dew Claws from Dogs – Should You Do It?, then you already know the pros and cons. If you haven’t read it, though, I’ll give you a brief refresher course.

What Are Dew Claws?

Dew claws are those tiny little claws that are located on the inside of your dog’s paws, upwards on the leg from the ordinary toenails. Much of the time, they’re removed, but what you need to know is that they’re not extra claws; they’re actually extra toes. And yes, when you remove the dew claws, you are cutting off your dog’s toes. 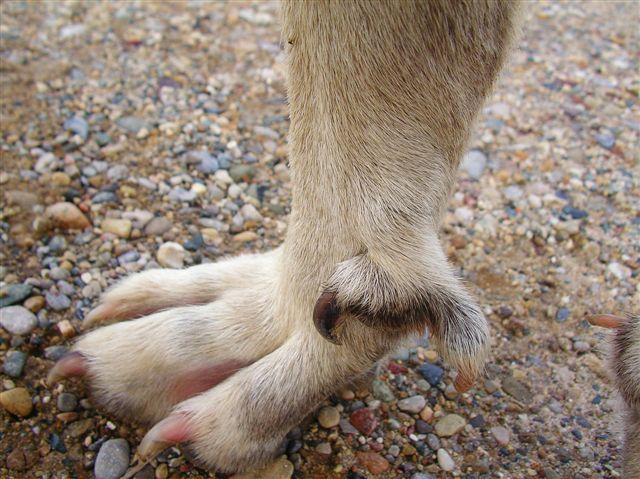 Well, sometimes. Is it painful? If done without anesthetic, yes. Let me repeat: you’re not trimming a nail; you are cutting off a toe.

Taking Parts off Your Dog

Okay, let me tell you right now: I dock tails. I use the bloodless docking method, which is basically snapping a rubber band at the upper joint of a puppy’s tail, where it meets the dog’s butt.

No. In fact, this form of “bloodless docking” is the only method that’s allowed in England.

Is there a reason for tail docking? Yes, and I’ll be the first person to tell you that it’s primarily cosmetic. Simply stated, some breeds look better with little stubby tails.

It’s not all cosmetic, though; some very active dogs can injure their tails very badly in the course of hunting or running through the woods. Docking prevents those injuries.

Regardless of why we dock tails, though, we should consider the reasons for removing dew claws in puppies. Do the benefits really outweigh the disadvantages? Does the procedure cause pain? Should it be done as a part of the “routine maintenance” of your dog?

What I Really Hate Here

Okay, back to tail docking. It can be done at home by a competent breeder and with no pain to the dog. Removal of dew claws in puppies is a bit different. It involves removing the entire toe, and if the breeder doesn’t get it right, there can be a bad outcome. That’s what I really hate.

This really isn’t a procedure that I recommend doing at home. For one thing, a dog may have more than one dew claw, with muscle and tissue that are all attached together. I’ve actually seen dogs with as many as four dew claws on a single leg. Do you really think you’re going to deal with that using rubber band docking? You need a veterinarian, because this is going to take a surgical procedure.

You need to think about how many dew claws have to be removed. How much bone and muscle is attached to those dew claws? How complex is the operation going to be? And you’re also going to have to think about the cost.

Granted, removal of dew claws in puppies is a lot less complex than it is in adult dogs, but it’s still going to require surgery done under anesthesia. With puppies, it’s done when the bones and tissue are still soft, so it’s easier. Most of the time, the anesthetic is what will cost you the most, so you might want to combine the removal of dew claws in puppies with routine procedures like spaying and neutering.

Removing Dew Claws from Dogs – Should You Do It?
Help, I Have a Sick Puppy!
Double Doodle Dog Breed: Puppies, Breeders, Price, Rescue & More

How Is It Done?

So, now that you know the basics of removing dew claws in puppies, how exactly is it achieved? These are the steps that your veterinarian will follow.

When your veterinarian removes the dew claws from an adult dog, he or she will usually give the dog a sedative to calm him, and then follow it with a general anesthetic administered intravenously.

With puppies, though, the procedure is a bit different. In a puppy under the age of five days, the dog will be sedated, but the procedure will be done using a local anesthetic; in other words, your puppy will feel calm but will not be asleep during the operation.

The vet will wash the area with surgical soap so that the puppy will not pick up an infection during the procedure.

The vet will use surgical scissors to remove the toe.

Once the toe has been removed, the resulting wound will be stitched up or closed using surgical adhesive.

Dogs often lick wounded areas, so the vet will cover the affected area with a bandage. If the dog is prone to tearing off the bandage, he might be fitted with an Elizabethan collar.

The surgery will usually take less than half an hour, and your dog can go home the same day.

So, that’s it. That’s basically all you need to know about the removal of dew claws in puppies. But should you do it?

Removing Dew Claws from Dogs – Should You Do It?
Help, I Have a Sick Puppy!
Double Doodle Dog Breed: Puppies, Breeders, Price, Rescue & More

Removal of dew claws in puppies is a topic that brings with it a ton of controversy. Breeders will tell you one thing. Veterinarians might have another opinion. Animal rights activists are probably going to tell you that you should never remove any “doggie parts.”

When it comes right down to it, though, the decision to remove dew claws is up to you. It probably won’t cause much harm, if any. But, for myself, I prefer to leave well enough alone. Dew claws are there for a reason, and I kind of prefer to keep them. Besides, why would you want to choose expensive surgery if it’s not really necessary? Just my two cents’ worth, though.