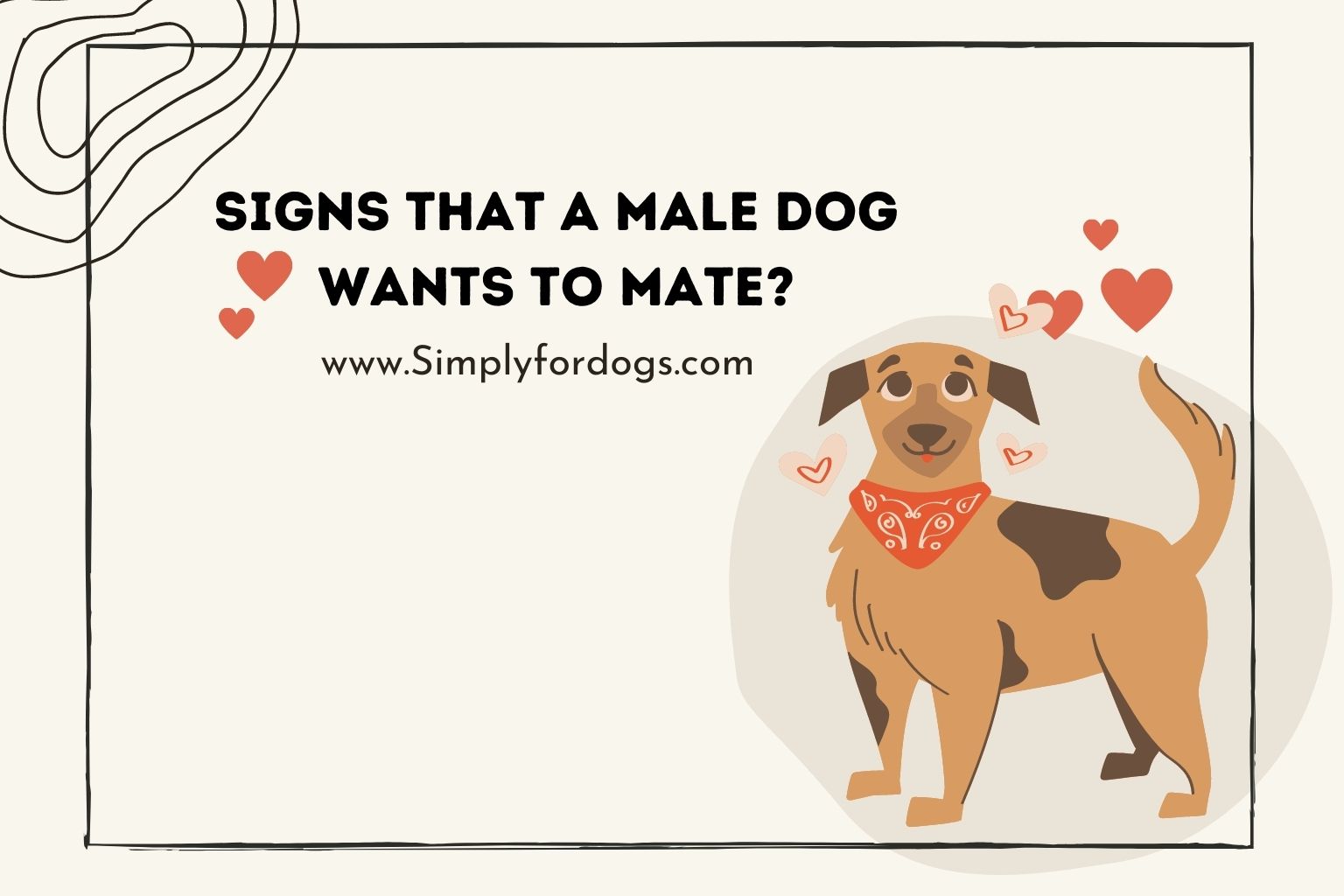 Almost every single dog will, at some point in its lifetime, experience the need to reproduce. Males tend to reach a point around the 1½-2 year range when it begins, while it varies a bit more female dogs.

If your male dog is not neutered, at some point, you will almost certainly be left with the question of whether you should allow your dog to mate or not. Some can see this natural part of animals as crude, while others find it a beautiful thing that should not be ignored.

Regardless of your personal stance on the matter, it can be difficult to know when your dog becomes interested in mating, especially if the dog is the only one in your household and you don’t visit dog parks or other areas with many other types of dogs regularly.

Depending on your dog’s breed, it will vary how soon or late your male dog becomes interested in mating at all.

Smaller dog breeds tend to reach sexual maturity before their larger counterparts. A common saying is that once the male dogs start lifting their legs to pee, is when they have reached sexual puberty.

This is not a specific rule since dogs can mate before that. But, at least by physically mounting the female dog, if nothing more than that.

Due to the increased levels of hormones, they might also show signs of different behaviors and become more independent. Many male dogs also mark the territory around them by urinating, and they might also be more prone to roaming.

How Can I Tell if My Male Dog Wants to Mate?

So how do you tell if your male dog is interested in this natural act? First of all, consider their age. If they have reached puberty, the chances are good that from here on out, they’ll be ready to mate if they meet an interesting female dog, especially one in heat.

Unlike female dogs, there aren’t really any time windows for male dogs when it comes to mating. They are generally speaking ready to go at any time.

Some of the most common things we see in dogs interested in mating are the following:

Keep in mind that this list is far from complete, but these are the most common things we experience when our male dogs show high levels of interest in mating with another dog.

Mounting or humping another dog, whether it’s a female in heat or not, usually starts to show in the puberty stages. In contrast, just like in humans, dogs experience a rush of hormones as they are on the path to sexual maturity.

Large and giant breeds can take longer to reach this stage, counted in human months, but eventually, almost every single intact male dog will at one point show interest in mating, especially when there’s a female in heat close by.

Should I Let My Adult Male Dog Mate?

You don’t have to let your male dog breed or mate whenever it shows signs of interest in doing so. However, it’s important to remember that we as humans have the option to control when and if our dogs breed at all.

As long as you can relieve the potentially pent-up frustration in other healthy ways, you should be fine having a non neutered dog that does not mate at all. But it can lead to various issues, so read further below if you have trouble with behaviors due to this.

Some people think that allowing their dog to mate will help fix their aggression issues as well as other behavioral issues. Unfortunately, this is far from true. In a few cases, it might help, but mostly it will not do anything different, as your male dog will soon be in the mood for another round of breeding, and then we are back to square one.

Most dog experts and professionals consider mating for monetary gains to be unacceptable as the sole reason for breeding. However, if you would like to welcome a new litter of cute puppies into this world and take care of a new generation, then, by all means, go for it. Just remember to be responsible.

There are many dogs in shelters around the world and in the states, so by having a good reason for adding more dogs into our world, you can sleep better at night and know that you have done the right thing for the right reasons.

What Should I Know if I Would Like My Dogs to Mate?

If you find yourself interested in letting your dog mate, finding a female in heat that is ready should be the first step.

And if you are serious about letting your dog breed, then bringing him to the vet for a checkup could be a smart choice. Here you would find out whether there would be any problem with breeding in terms of a potential medical condition or genetic disposition.

After all, getting a healthy litter of puppies is the most important thing. However, we can increase our chances of success and hopefully avoid unwanted results by doing preliminary work.

If you have two dogs from the same breed, it might be better only to let one breed if it has better vitals and health results.

2. Make Sure the Dog Is Sexually Mature

You also need to let your dog reach maturity naturally. This often means waiting until your dog is between 16-24 months old, and many experts recommend at least 24 months before starting any mating or breeding.

This is partly to ensure your dog can pass health checks in the first place, since many clinics do not test younger dogs, but also to make sure healthy puppies are at the end of the day. Younger dogs that aren’t fully developed but still breed often produce less than stellar results when it comes to breeding.

Not all dogs are made equal. Adult male dogs mate with just about anyone if allowed, but as pet owners, we can choose a female dog in her heat cycle. This shows by vaginal secretions around the genital area and often start when they hit puberty. Other females show clingy behavior or excessive licking, but it can depend on the age and physical issues as well.

If you also own the female dog, you can wait until the female dog goes into heat or have the owner call you when it happens. Most dogs experience a heat period of around 1-2 weeks, so you should have plenty of time to find a day that suits all parties.

Remember that a vet should also check the female dog. Once a female dog shows tendencies of sexual behaviors, experiences its first heat cycle, or has a swollen vulva, you should consider bringing the dog for a checkup. Doing this before letting them mate with an intact male dog can save much trouble down the road.

While it might sound odd, male dogs are actually more prone to experience stress during mating and therefore fail to produce the desired outcome.

As the dog owner, you can help the dog feel relaxed and calm, and if possible, introduce the female a few times before the mating session itself. That way, you will increase the chances of conception.

As part of the health check-up for the female dog, your vet might explain the best time period for breeding. According to the American Kennel Club, It will depend on their cycle, and by following this advice, you will increase your chances even more.

Oftentimes people schedule not once but two breeding sessions, sometimes with as little as one or two days difference. This can further increase the chances for success.

What Are Unwanted Behaviors Regarding Mating?

If your dog is humping everyone and everything around it, then that is a major problem that needs to be solved by positive handling of the issue. But, unfortunately, it will not help being angry, and neither will ignoring the problem.

It’s important to remember that excessive humping is almost always due to stress-related issues, some of which we have listed here for your convenience:

If your male dog is overly sexual towards dogs, it can be a real issue. It will become difficult to bring your dog to the park, the beach, or even friends and family where there are other dogs around. Your dog’s body might be in pain, or it might be psychological. You need to figure out which one it is.

In the worst case, you might need to castrate the dog but always talk to professional help before reaching these conclusions. Some dogs can be trained to not act upon their impulses, while others might have a medical reason for acting out.

What Are Some Common Unwanted Behaviors Regarding Mating?

Dog owners might have seen these symptoms but not realized the reason behind them, so we’ll briefly cover some of the most common unwanted behaviors.

There can be many reasons for this type of behavior, as mentioned above. If you are actively walking your dog regularly, it might even be overstimulated by too much excitement.

Perhaps you are the kind of person to stimulate your dog regularly by throwing dozens of tennis balls during the day, biking long distances with your canine buddy running along for extended periods of time, or some other highly engaging activity.

Just like how dogs act when they get too little exercise, too much exercise can lead to built-up stress that needs to be relieved. And humping might be one way to do that. The same goes if your everyday life is very busy and chaotic. By not allowing the dog to wind down and relax, the stress can manifest itself in other ways.

Another common issue is that dogs that lack sleep also show tendencies of this behavior. Normally it is recommended that adult dogs get around 16-18 hours of sleep per day, while dogs in puberty might need as much as 20 hours. So consider the two above possibilities. It might be that you just need to let your dog relax and calm down by giving your furry friend some time to himself.

How Can I Fix Behavioral Issues Related to Mating?

It’s important to get a few concepts clear if you want to help fix this kind of problem. First of all, you should not find it cute or funny, nor consider it an innocent game when your dog is showing too much sexual interest in another dog. Even if the dog is too young or too old, this type of behavior is to be taken seriously.

The first thing is to remove your male dog from the other dog, person, or item with which it is currently humping or interacting. Do so in a calm and collected manner. Don’t freak out, as this can raise stress levels even higher.

If you have children around, try changing the activities to include more food or snacks. For example, teaching your children to play with your adult male dog by hiding treats and letting the dog find it around the backyard can be a great way for the dog and children to bond in a safe and healthy manner.

Whenever possible, try to correct your dog as soon as it tries to initiate sexual activities with another dog, person, or item. But, again, do this in a calm manner so as not to associate the separation with any negative outcome.

Contrary to popular belief, having your male dog mate with a female will not relieve your dog from all the negative behavioral issues it is manifesting. So letting your dog mate curb a behavior will just lead to unwanted puppies, expensive bills for veterinary medicine from the pregnancy, and a dog still suffering from issues.

The problem almost always comes from somewhere else, so you can avoid scheduling breeding and get a healthier and happier dog instead by finding this issue.