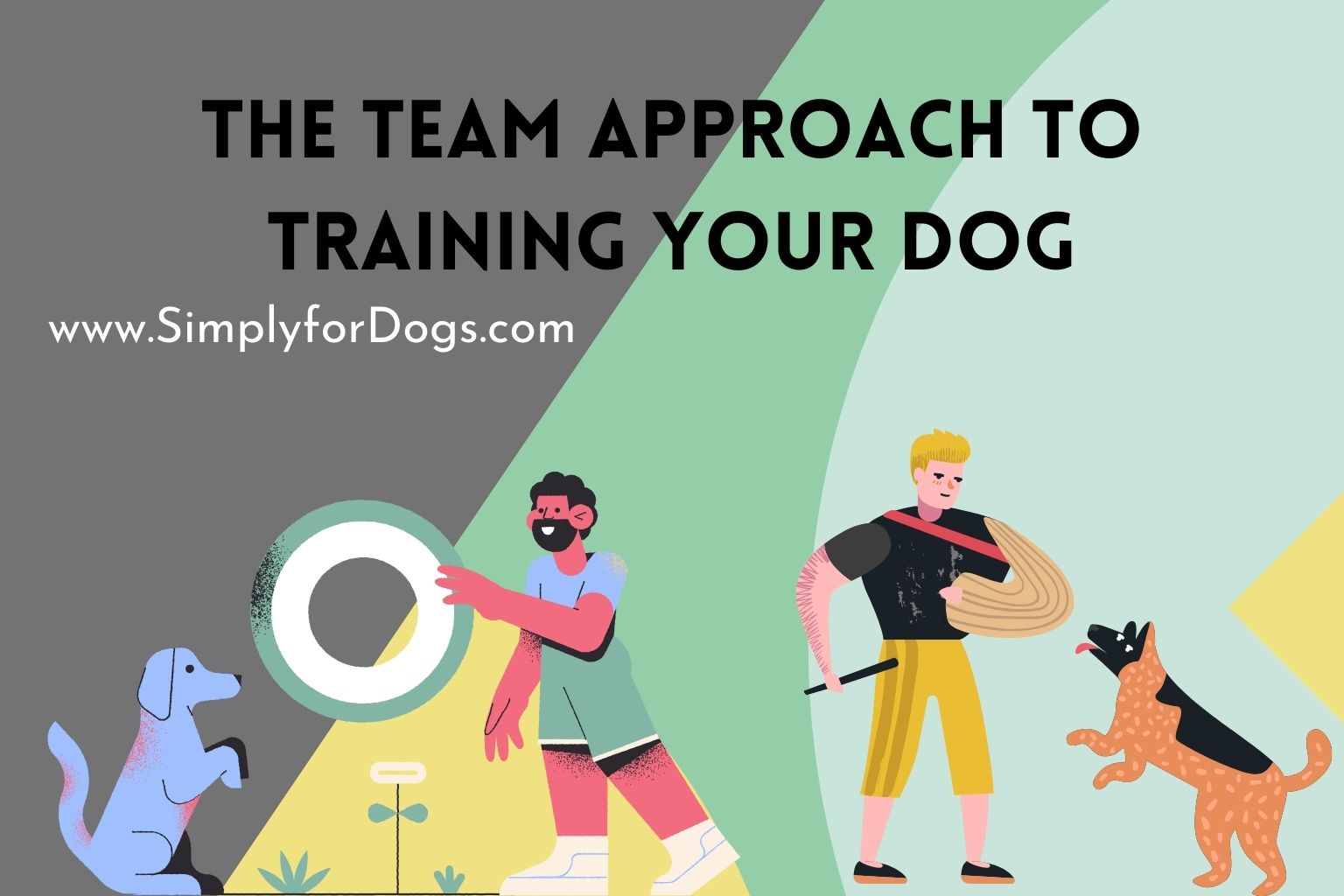 There are any number of experts and supposed experts out there who are going to tell you that their way is the only way when it comes to training your dog.  Most of the time, I take a little from this and a little from that – kind of like when I go to a Chinese restaurant and choose one from the appetizers, one from the rice dishes, and then one each from Column A or Column B, and I usually end up with a training approach that works for me. Regular readers also know that I am a fan of Cesar Millan, although I don’t necessarily agree with everything he suggests.

One trainer that I really do like, though, is Brian Kilcommons. He takes an approach to dog training that is founded in common sense and understanding the way that your dog thinks. He calls it the TEAM approach, which stands for Tone, Emotion, Attitude and Movement. I’d probably say that when it comes to training my dogs, I take a lot more from him than I do from other trainers, even from Cesar Millan. I do it because it’s sensible and based in the trust and mutual respect you have with your dog.

What Exactly is the TEAM Approach?

The TEAM approach is a way of training your dog, early on, in the basics – in other words, the things that he would ordinarily learn in obedience classes. It also focuses on teaching you how to relate to your dog during training.

Brian Kilcommons is of the belief that if you are going to be a good teacher, then you need to accept that you are going to be the one in the relationship who has the most responsibility. In other words, your job is to be patient, fair, decisive, enthusiastic and consistent. Your dog, on the other hand, just needs to show up.

You need to know how your dog thinks, and then you have to find the best way to tell him what you would like him to do. And in order to do that, you have to put yourself in your dog’s position.

I know, you’re wondering how you’re going to do that, or what’s even meant by it. Well, imagine that tomorrow, everyone you meet is speaking another language – one that you don’t understand. Someone says to you, “Svieriueriufgnft.” You gape at them, because you don’t know what the heck they’re saying. So, that person raises his or her voice and says “Svieriueriufgnft!” You still don’t get it, so they shout “SVIERIUENIUFGNFT!”

How well did that work out? You can’t communicate on that level, and you never will be able to. You’re confused. And then the person looks at you in disgust, convinced that you’re stupid or just not trying.

Your dog is going through something similar when you are when you shout orders at him without putting them in context. You might tell him “Sit,” but to him, it’s just words if not accompanied by Tone, Emotion, Attitude and Movement – TEAM.

So, now, let’s break TEAM down into individual element. Tone is using your voice to communicate with your dog. Emotion means using various ways of showing your dog how happy you are when he does what you would like him to do. Attitude means being decisive and showing your dog that you will help him to learn. Movement means using your body language to show your dog what kind of behavior you want. Combined, this means that you are working to form a good bond with your dog and helping him to become a good canine citizen.

So now, let’s talk in more detail about the four elements that form TEAM training.

Many animal behaviorists believe that dogs are capable of learning about 300 words, outside of commands. This means that dogs can actually develop a vocabulary that’s probably on the same level as that of a toddler. Just because they can’t speak the words, that doesn’t mean that they don’t understand the words.

That said, though, dogs do react more to tone than they do to actual words. I’ve seen this more than a few times, with owners who say things to their dogs like “Who peed on the floor? Hmmmm? Who did that? YOU did, didn’t you! Who’d like to go to the vet to be put to sleep? YOU would!”

Of course this is all delivered in a happy tone, and the dog wags his tail as if to say “Oh, yes, me! I’d like to go to the vet to be put to sleep!”

Okay. This tone is fine, and in fact very useful in training. The fact is, dogs love to be baby talked and the words might not matter all that much (although I still don’t say things like that to Janice and Leroy).

What I’m getting at here is that inflection can be used to express pleasure or displeasure, but most of the time all the dog is going to get is inflection, vocabulary notwithstanding. So watch what you’re doing. If you want your dog to sit, for instance, don’t use the same tone you use when you’re delivering baby talk. Tell him firmly to sit. If you use the same tone that you use for praise, your dog is just going to think that you’re happy with him, and there’s nothing more that needs to be done. A command should be delivered firmly. Once the dog does what you want, then you can reward him with baby talk.

The same thing goes for corrections. Corrections should be delivered in a firm, but not angry, tone. If you say “Bad boy” in a sing-song voice, your dog is going to think that he’s being praised. So use a lower tone of voice than usual, but don’t shout. You don’t want to frighten your dog, but you do want him to know that you’re displeased with his actions. So commands like “No,” “Off,” “Leave it” and so on should be delivered in a tone that doesn’t seem to convey approval, while still not frightening the dog. Then, once the dog does what you want, you can switch back to a happy tone, offering praise.

Dogs are highly emotional creatures, and they will respond to your emotions. So let your dog know how happy you are when he does something that pleases you. If he displeases you, hold back – if you make him afraid, there’s not going to be a good long-term outcome.

You have to remember, too, that your dog thinks differently than you do, so don’t give into the temptation of thinking that he’s just being perverse. He doesn’t know, for instance, why you don’t want him to chew your slippers – they smell good, and he loves you, so chewing your slippers soothes him when you’re away. Then, you come home and yell at him for chewing the slippers. He might have done that hours ago, and he has no idea why you’re so angry.

How would you feel in the same situation? Imagine that you’re home all day waiting for someone you love to come home. Then, when they get home, the first thing they do is inspect the house, looking for things that you might have done wrong. They discover something that displeases them, and they shout at you. Maybe they even hit you. How are you going to react?

You don’t want your dog to feel like that, so don’t let your emotions override your common sense. Don’t show anger toward your dog. By the same token, don’t coddle either. I don’t like to stereotype, but I often find that this is a problem with owners of small dogs – Mommy’s home, precious, it’s all right now, you don’t have to be afraid anymore! Yup, way to build a neurotic dog.

Basically, maintain a calm, steady demeanor when you’re around your dog, and most of the time that will lead to the kind of emotional stability you want.
Attitude

This is about you, not your dog. Throughout training, you need to maintain a clam, competent attitude if your dog is going to learn. You have to be decisive and set parameters. This means that you need to have a fair, firm attitude. Remember that you are the teacher, and you have to show your dog what you want. You also have to be consistent – don’t be lazy and let your dog think that what you allowed on Monday isn’t going to be tolerated on Tuesday.

The main thing about attitude, though, is that you can’t get frustrated. I’ve seen more than a few dog owners throw down the leash and say “He’s just bad.” No, he’s not. He just doesn’t know what you want. So stay calm and cool and let him know what you want.

Since you can’t communicate verbally all that much with your dog, you’re going to have to learn movement. I mean, realistically, you’re not going to be able to say “Mason, I’m not really all that impressed when you do things that I don’t like, so let’s pull back and regroup, and see if we can talk about ways of making you a better-behaved dog.”

Movement is very important in dog training. Dogs understand body language even better than we do. If you’re moving toward your dog, he could see it one of two ways – as a threat, or simply as your way of saying that whatever is going on, it’s going to play out your way. Dogs on lead are almost inevitably going to make mistakes, so the key here is not to grab at your dog if he’s not moving in the direction you want him to – he’ll react in one of two ways, either by pulling away from you, or becoming aggressive. So if you’re on the move, stay on the move

When training you should also avoid standing still or backing away, because when you do that, you’re telling your dog that you’re submissive. The only time you should do this is when you’re dealing with a fearful dog (perhaps a rescue) that has a very real need to see you as less threatening. If this seems to be the case, then just stop and encourage the dog to come to you. Let him have the control of the movement.

So, that’s the TEAM approach. It’s all about Tone, Emotions, Attitude and Movement. Generally speaking, your dog is going to respond more to these things than to your words, no matter how good a vocabulary he has.

Of course this approach should also go hand in hand with timing – you know that your dog has to be corrected in a matter of seconds if he misbehaves, and he should also be rewarded within seconds if he does what you want him to do. You’re always better off to catch him doing something right and reward him for the good behavior than to find him doing something wrong and then correct him. In other words, tell him to sit before he jumps on you. Take him outside and give him a treat when he does his business out there rather than waiting for him to dump on the floor. And don’t scold excessively – there’s nothing sadder than a fearful dog.

In the final analysis, it’s your job to train your dog kindly and effectively. I don’t pretend to know everything, and I know that there are many approaches to dog training, but I’ve found that much of the time, the TEAM approach has worked for me and my dogs. It’s founded in common sense and kindness, so if you’re looking for a good way to train your dog, I can definitely recommend the TEAM method.