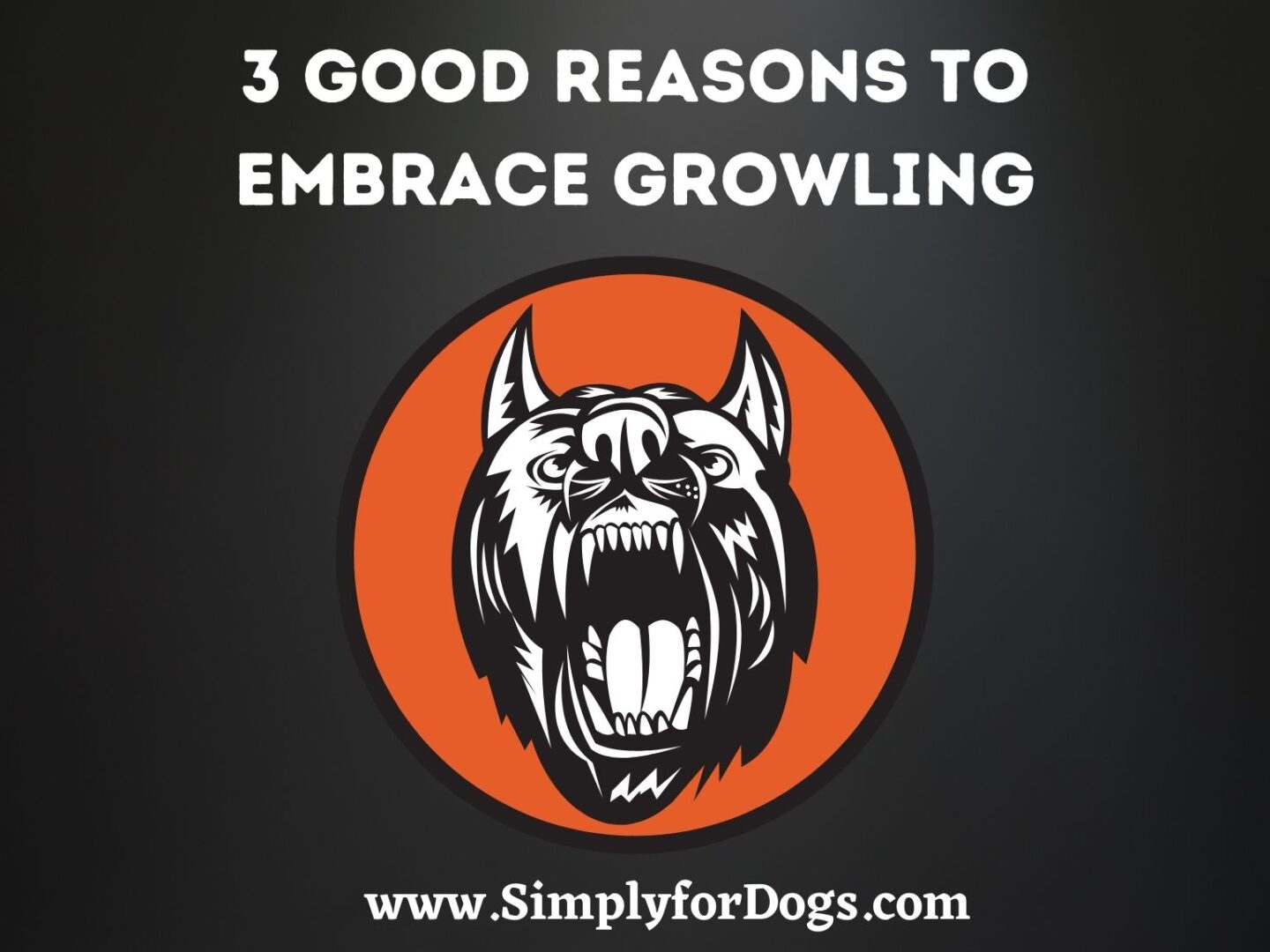 So, your puppy has been growling at you, and it’s not exactly working wonders for your relationship. You’re concerned that the growling is going to escalate into nipping, or worse, biting. Maybe you’re even becoming a little afraid of your puppy. I know I experienced something like that when my Leroy was young, and I talked about it in How to Stop Nipping Before It Turns Into Biting.

The thing is growling isn’t always necessarily a bad thing, and I’ll tell you why shortly. But before, let me tell you a story about a growling dog, and how the situation was handled to the satisfaction of all concerned.

I often talk about my friend Neila in my posts, probably because she’s a good friend and she knows a heck of a lot about dogs. I like to think that I’m fairly savvy when it comes to dogs, as well, but I’m often amazed at how much I’m able to learn from Neila.

If you’re new here, to give you a bit of background, Neila owns and breeds Rottweilers. She also rescues and re-homes from time to time. So, I’m frequently unsure exactly how many Rotts Neila has in her home at any given time. She loves Rottweilers, abhors breed-specific legislation (as do I) and is an amazing advocate for what is often an unfairly maligned breed.

In The 5 Most Common Dog Training Mistakes, I talked about a situation Neila had with a young Rott, Dallas. Dallas had found a dead rat in the yard, and brought it into the kitchen where Neila and I were having coffee. Neila grabbed for the rat, and Dallas nipped at Neila. Without even missing a beat, she flipped him on his back in the often-maligned but frequently totally appropriate alpha roll, and yanked the rat out of his mouth.

I’m revisiting this story because it’s so very different from what happened with Joe-Bob.

Joe-Bob is seven months old, and neutered because Neila will not keep two intact males at the same time. Her dogs are very much house dogs, and reproductively intact dogs of the same sex will often fight, even to the death. She found Joe-Bob in an animal shelter, most likely lost but with no owner showing up to claim him.

Anyway, to get back on track, it was another coffee day with Neila, and Joe-Bob showed up chewing on something or other; what it was doesn’t really matter. What does matter is that neither Neila nor I could tell what he had just from looking. So, Neila reached down and attempted to take the unidentifiable object out of Joe-Bob’s mouth, whereupon he hunkered down and growled at her.

I was fully expecting another alpha roll, but instead, Neila just calmly got up, opened a cupboard, pulled out a box of Pupperoni and handed Joe-Bob a treat. He instantly dropped what turned out to be nothing more than a bit of fabric (I’m sure Neila found what he’d destroyed later, after I’d left) and took the treat. Neila petted him and told him he was a very good boy.

So, I was like “Neila, what the hell?” After all, Dallas had been alpha rolled. Why was Joe-Bob rewarded?

“It’s simple,” Neila said. “Dallas snapped. That was an outright challenge for dominance and I had to deal with it quickly. Joe-Bob was just telling me that he’d prefer to keep what he had. I offered a fair trade. It’s all good.”

So, what did I learn from this exchange?

The more I thought about it, the more I realized that growling in dogs is not necessarily a bad thing. Neila accepted Joe-Bob’s growling, and I started thinking that maybe we shouldn’t be all that concerned when our dogs growl. We should be attentive, yes, but perhaps growling shouldn’t be discouraged. Here are three reasons why we should accept growling and learn how to work with it.

Breed of the Week: The Bedlington Terrier (Video)
4 Best Hands Free Running Leashes
Flying the (Pet) Friendly Skies – What You Need to Know About Travelling With Your Dog(Video)

I think that we often forget that dogs and humans are not the same species. Well, maybe we don’t exactly forget it, but we don’t really think about it, because we’re so closely bonded. I know that most of the time I just go from one day to the next never really thinking about the fact that Janice and Leroy and I are different, until one day it might hit me that it’s nothing short of miraculous that we coexist so wonderfully.

The thing is, though, dogs and humans don’t communicate in the same way, and it’s not really fair to expect that we should. Sure, we can teach dogs commands, but to expect them to respond to different stimuli in the same way that we would isn’t fair.

I suppose that Neila could have just forced Joe-Bob’s mouth open and taken away that little fabric scrap. After all, Joe-Bob was still pretty young and she might have been able to get the better of him physically, but would it have been right? Would it have been fair? Would it have really taught him anything other than, “I want this, and Mom wants it too, so it must be really valuable”? Looking at it that way, there’s actually a pretty good chance that if she’d grabbed, the situation could have escalated, and similar situations in the future, when Joe-Bob got bigger and even more assertive, could end badly.

The other thing Neila could have done would have been to train Joe-Bob not to growl. But would that really have been a good idea? If she’d done that, she’d actually have been telling Joe-Bob that it’s not okay to communicate. So, if he can’t tell her that something is bothering him, what do you suppose happens next? I’m thinking that it could be something along the lines of acting out – in other words, biting – because he’s not being permitted to communicate. And the only way that’s going to end up is in disaster.

2. A Dog Should Be Able to Speak

Most of the time, a dog will use body language before he begins to growl. In Joe-Bob’s case, the body language was the hunkering down. Because Neila acted quickly, though, the time between the body language and the growling was brief. Neila didn’t let it go beyond the initial low growl, though, before deciding on a course of action. The next step on Joe-Bob’s part would have been to pull his lips back and show his teeth.

Is that necessarily a bad thing? Well, consider this: when a dog is showing his teeth, he’s not biting. He’s saying, “I could bite you if I wanted to, but I’d really prefer not to.” So, if Neila decided to teach Joe-Bob not to growl, what she’d actually be doing would be delivering the message, “Don’t warn me.”

To put this in human terms, let’s say you have a conflict with a co-worker. I’ve had more than a few in my time. Usually, when things got tense I’d offer up one of my famous glares – the equivalent of Joe-Bob’s hunkering. Sometimes, the co-worker would back down, and other times, not. When they didn’t, I’d say something like, “I think we need some cooling-off time here, so don’t push me any further” – the equivalent of Joe-Bob’s growl. When that didn’t work, I’d punch my co-worker in the face.

Well, okay, I never actually punched anyone in the face. Sometimes, I wanted to, though. But we’d always get to the point where the glare and the verbalizing were enough to deescalate the situation, which is essentially how it worked with Joe-Bob and Neila. If she’d kept on pushing him, she’d have probably been bitten – the equivalent of the punch in the face that I never delivered.

3. Accepting the Growling Is Better Than Pushing the Dog

If Neila hadn’t dealt with the issue at the point where Joe-Bob began to growl, he probably would have still had a bit of self-control, but the next step would likely have been what is commonly referred to as an “air snap.” This is the point that occurs after you’ve already been told, “I could bite you if I wanted to, but I’d really prefer not to.” This is, “I could bite you if I wanted to, and right about now I’m thinking that might not be a bad idea.”

The step after the “air snap” is the nip. The reason why Neila alpha rolled Dallas as soon as he attempted the nip is that the next step is the full-on bite.

Now, you can see that dogs go through several stages before they’re actually ready to bite. You get the hunkering. Then you get the growl, then the air snap, then the nip. The dog is, essentially, trying to avoid conflict in every way he knows how, while still protecting what he perceives as belonging to him. If you ignore those warnings, there’s a very good chance that you’re going to be bitten. So listen: your dog is trying to tell you something in the only way he knows how.

Am I saying that you shouldn’t be able to take things away from your dog? No. But Neila’s approach with Joe-Bob was just the start. She took away what he had by replacing it with something of higher value. She’ll keep on working with Joe-Bob, offering better treats in exchange for what he has in his mouth, using commands like “Let go” or “Give” as they progress. Eventually, Joe-Bob will get to the point where he’ll allow Neila to take anything at all out of his mouth, and the result will have been achieved without conflict and coercion, because Neila will listen to Joe-Bob at every stage.

What Happens When You Ignore the Warnings

If you’re going to play the “strong alpha” role in your dealings with a growling dog, it’s not a matter of whether you get bitten, it’s when you get bitten. And when you get bitten, it will probably be in the face. This is because you’re leaning down toward the dog, in an aggressive position, and the dog is going to try to communicate with you in the same way as he would with another dog; remember, you don’t have a common language.

Dogs deal with other dogs typically by biting on the face or muzzle. The severity of the bite will depend on how stressed the dog is. You will get all the warning signals you need to stop the confrontation, but if you don’t pay attention to them, there’s going to be a fight, and you’re probably going to lose.

Breed of the Week: The Bedlington Terrier (Video)
4 Best Hands Free Running Leashes
Flying the (Pet) Friendly Skies – What You Need to Know About Travelling With Your Dog(Video)

If your dog is growling, there is a reason. Often, the reason is that he has something and doesn’t want you to take it away from him. If the growling is over possession issues, the problem isn’t the growling; it’s the behavior. And the correct course of action is to train, not to discourage your dog from growling. Do what Neila did: offer something better and work with your dog until you are able to take things away without running the risk of being bitten.

Sometimes, too, dogs will growl if they’re stressed or in pain. Again, you don’t want to discourage the growling. How else can your dog communicate with you? It’s not like he can say, “Mom, when you touch my ears, it hurts, and I think they might be infected, so you should probably take me to the vet.”

Growling is never spiteful. It’s simply your dog’s way of telling you that something is bothering him. So don’t discourage it; instead, listen. Learn what it is that your dog is trying to say, and act on it.