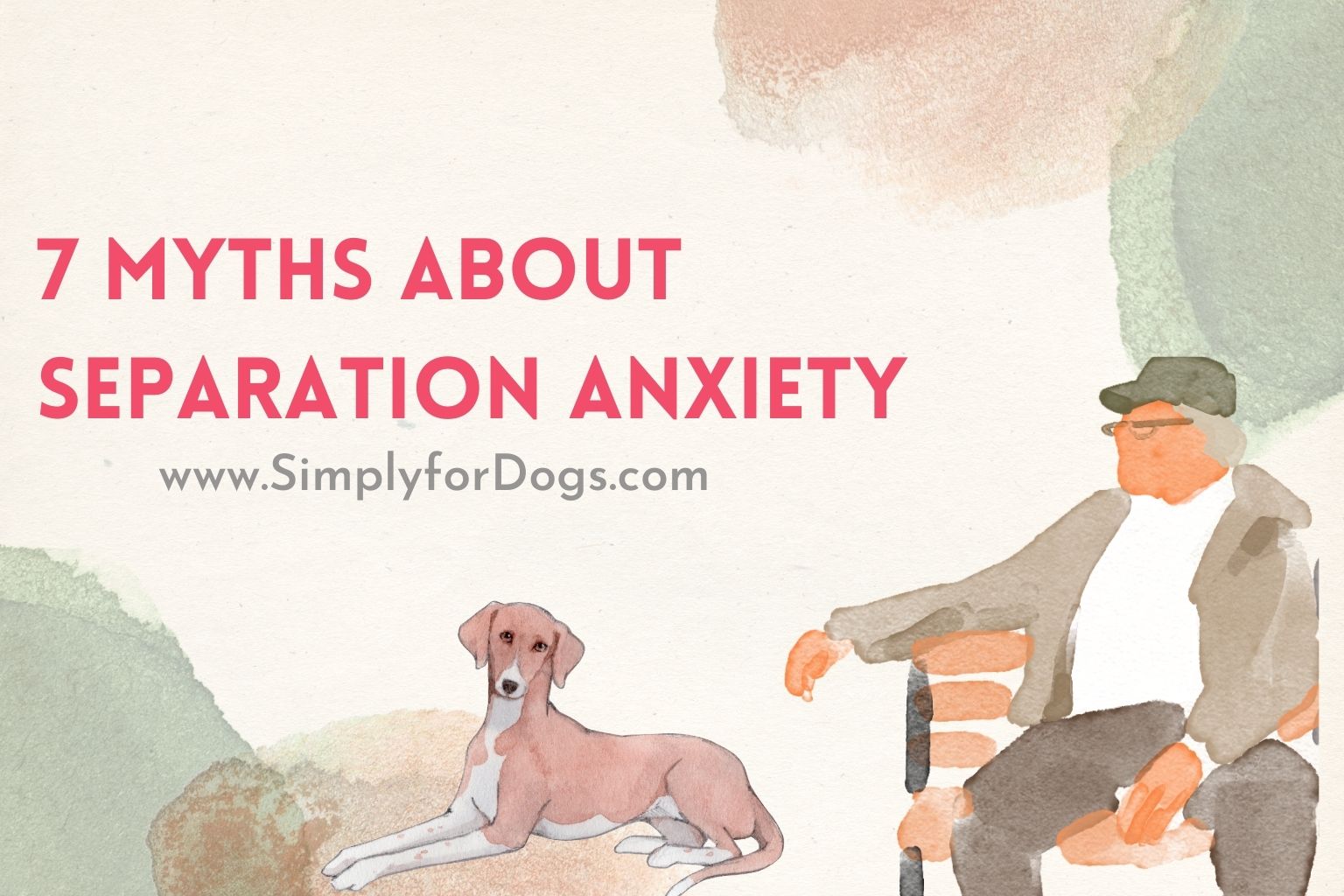 Does your dog chew up the furniture when you leave him alone, howl a lung up in the car if you leave him for five minutes to pick up a prescription or grab a quart of milk? Does he seem to need to be with you every single minute of every single day without completely losing his mind? He could have separation anxiety. I talked about this briefly in Mommy, Don’t Leave Me: Dealing With Separation Anxiety, but one thing I didn’t talk about in that post was the fact that there are so many myths about the disorder. I’ve even bought into some of them over the years.

One of the biggest myths is that dogs are all going to manifest separation anxiety in the same way: with the behaviors that I just mentioned. Sometimes, dogs actually don’t act destructively, don’t experience panic attacks and don’t show any signs at all that they’re troubled other than perhaps a bit of listlessness. Separation anxiety can actually be difficult to diagnose and treat, but if we can get past the myths, we’ll have a better chance of understanding when our dogs are suffering from separation anxiety and we’ll be better equipped to help them deal with it.

So, with that in mind, the following are seven myths about separation anxiety.

1. Your Dog Just Can’t Be Away From You if He Has Separation Anxiety

Dogs that manifest separation disorder by clinging to you every minute of every day are often referred to as “Velcro dogs,” because they just constantly have to be next to your side, and can’t stand being away from you for even an instant. These are the dogs that will chew through a bathroom door to get to you when you’re trying to go potty.

Now, it’s true that a lot of dogs with separation anxiety will follow you around compulsively, but it’s not true of all of them. You might very well, for instance, have a dog that’s quite content to wander around the back yard while you’re in the house, lie on the back deck, or even wander into his crate in another room while you’re vacuuming. All that goes straight out the window, though, the minute you get in your car and drive off.

The thing is, you’re not in the house anymore, and that’s where your dog wants you. It’s fine if you’re in another room, or he’s in the yard and you’re in the house, but you have to be in the house. If you’re not, all hell breaks loose. So even if your dog isn’t constantly glued to your side and shadowing every single move you make, he could still have separation anxiety.

2. If You Let Your Dog Sleep with You, He Will Develop Separation Anxiety

Oh, please. Some trainers will actually tell you this; they claim that a dog that sleeps with you will become so bonded that being apart from you will be intolerable. This is utter nonsense from my perspective. I’ve never had a dog that didn’t sleep with me, and I’ve also never had a dog with separation anxiety.

That said, though, there may be a bit of truth in this, but only if your dog already has separation anxiety. The thing is your dog needs to feel okay with being alone, and if you’re just as close at night as you are in the day, then sleeping together could exacerbate the problem. If your dog can’t stand to be away from you overnight, then he’s not going to just magically get better during the day.

So, if your dog has separation anxiety and is sleeping with you, try to scale it back a bit. You don’t exactly have to kick him off the bed and out of the bedroom, but “off the bed” would be a good start. Get a doggie bed, and make him lie down on it at bedtime. If he tries to get up onto your bed, push him down gently. If he becomes really persistent, you might try tying a leash onto the doorknob so that he can reach his bed, but not yours.

Eventually, you could work toward having him sleep outside your bedroom, but don’t feel that you have to really push the issue. The goal here is to have your dog feel comfortable without being pasted to your side, and eventually to get him to the point where you can leave the house without having him feel horribly stressed.

3. Your Dog Won’t Eat if You Leave Him Alone

Okay, so what’s the big deal? You don’t really think your dog is going to starve because you went out for an hour or two, do you? Besides, think about this: what happened the last time you were stressed? Did you stop eating, or did you dive into a big bowl of ice cream?

Maybe your dog will eat when you’re out, or maybe he won’t. If you’re all that concerned, get him one of those Kong toys that you can fill with peanut butter or yogurt. He’ll have something to chew on to ease his stress while you’re away, and he’ll get a bit of nourishment besides.

So, while you were out, your dog chewed up your furniture. Does that mean that he has separation anxiety, or does it just mean that he felt like chewing? A lot of the time, people end up rushing off to their veterinarian, demanding medication for what they see as a stressed-out dog. Sure, sometimes destructiveness is an indication of separation anxiety, but it can also mean that your dog is under-stimulated or badly trained.

Usually, if the issue really is separation anxiety, the things destroyed will be shoes or clothing – things that smell very much like the dog’s person. The dog finds the smell comforting, and chews.

5. Getting Another Dog Will Help

Sometimes, this is true, but not always. If the first dog simply doesn’t want to be left alone, then introducing another dog into the household can be helpful. But this isn’t separation distress; it’s isolation distress. It’s not that the dog can’t stand being without a particular human; it’s just that he needs someone, something, some other living entity around in order to be happy. He’ll probably respond equally well if you get him a cat. The danger here is that if it’s really the company of his human that he needs in order to be happy, getting another dog won’t help. In fact, you could just find yourself with two dogs that have separation anxiety. So, unless you actually want to be a two-dog family, don’t add another dog thinking that it’s going to be the cure for your original dog’s separation anxiety.

One thing you could do, though, is foster another dog, or borrow one from a friend for a few days. If the presence of another dog helps the original dog, then you might consider adding to your family.

6. You Should Never Crate a Dog With Separation Anxiety

Don’t buy into this one. If your dog has separation anxiety, and you decide that a good way to stop his destructive behavior when you’re out is to shove him in a crate, then yes, you probably are buying yourself a world of trouble. Your dog might seriously hurt himself trying to escape the crate. However, if your dog is used to occupying a crate, and considers it to be sort of a “home within a home,” then he’ll probably be fine. In fact, he might settle down when you’re about to leave, because his crate is a safe place for him.

7. When You’re Home, You Should Ignore a Dog That Has Separation Anxiety

Oh ferchrissake. How would you feel if you came home from work and instead of saying “Hey, honey, how was your day?” your husband, wife, boyfriend, girlfriend, roommate or whatever just walked off into another room and pretended you weren’t even there? You’d probably wonder if you’d done something wrong, think that they were mad at you, and feel terribly hurt.

All that this kind of behavior is going to do is cause more stress and anxiety. Sure, you shouldn’t make a huge deal about your comings and goings, but exercise a bit of common sense and think about your dog’s feelings. He’s missed you, and he wants to know that you still love him. So don’t let him jump all over you, but don’t ignore him either.

When it comes to separation anxiety, first of all, you have to be sure that it’s really the problem. Separation anxiety can manifest in a lot of bad behavior, but so can poor training, boredom, lack of exercise and other issues.

If the problem really is separation anxiety, then your dog is suffering, and something has to be done to alleviate that suffering. All too often, people are prone to dragging their dog off to the vet for medication, and honestly, I’m no fan of “puppies on Prozac.” Much of the time there are other ways of dealing with the problem; you could have someone like a parent or friend keep your dog company, or take him to doggie daycare if you have to go to work. If it’s just a matter of an hour or so out of the house to run errands, you could take your dog with you, put him in his crate, or leave him at home with treats and toys that will keep him amused until you come back. You could also consider getting another dog, although this is not without its pitfalls, as pointed out above.

The most important thing you can do, though, is work with your dog. Let him know that he is loved and that you will never leave him. Ensure that he feels safe even when he’s not with you, and this could mean things like encouraging him to sleep in his own space. Your dog just wants to know that he’s safe, even when you’re not there. It might take a bit of work, but you can get him to that point. So be patient and loving, and consider his feelings the same way that you want the people in your life to c