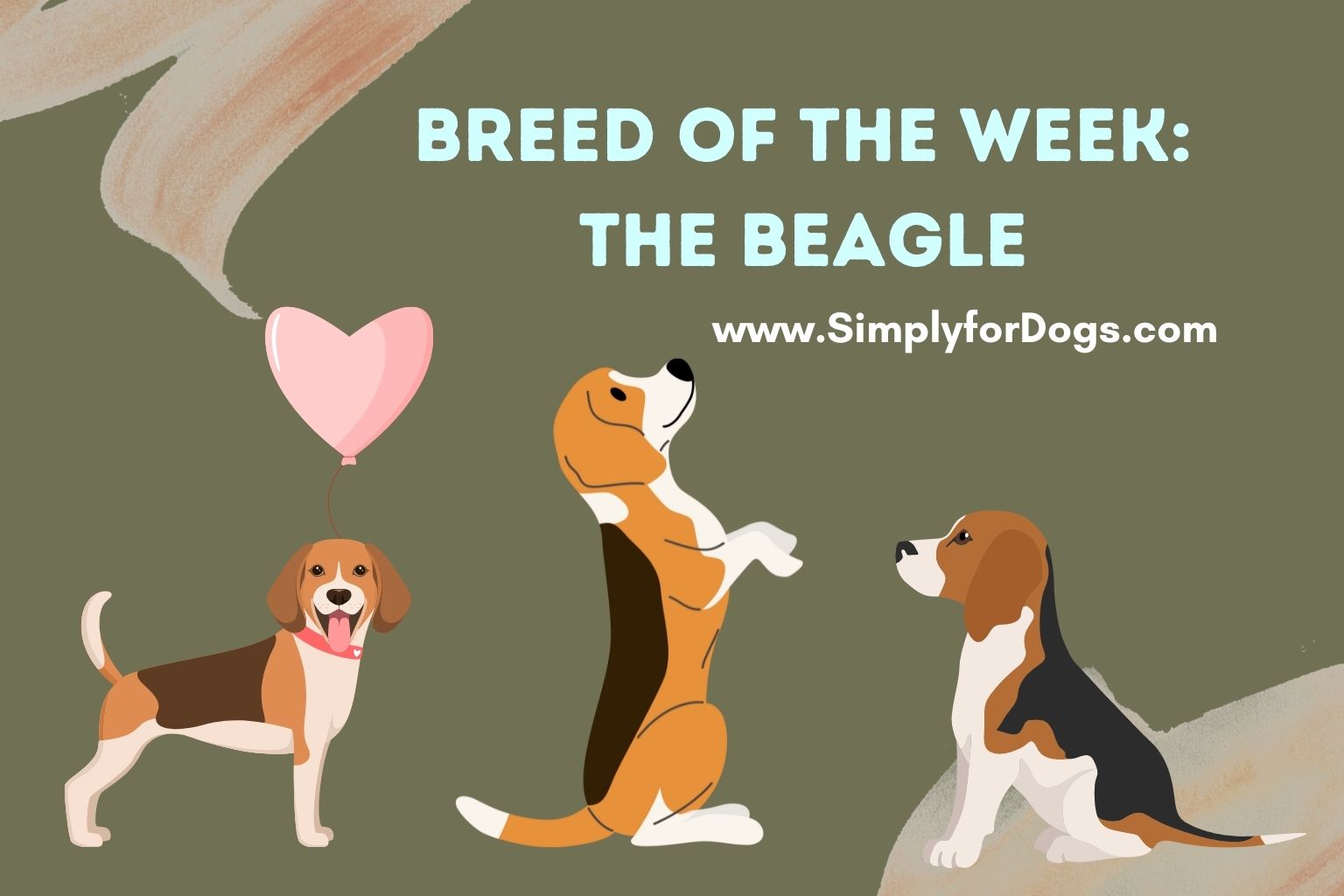 The Beagle is a small, compact dog that has an incredible sense of smell. Because of his amazing nose-power, the Beagle is highly prized for his ability to track small game. In addition to his hunting ability, the Beagle is a fun-loving dog that is well-suited to families, and also gets along well with other animals.

It’s not really known where the name “Beagle” originated. It’s believed, though, that it could have come from “begueule,” a French word meaning “open throat” – no doubt a reference to the Beagle’s distinctive baying voice. The origin of the breed is also a bit in the dark, because the Beagle as we know him really didn’t come into focus until the 19th century. There are documents from ancient Greece (around 400 BC), though, that refer to dogs that resemble Beagles. In British History, Henry VII is believed to have owned Beagle-like dogs, and his granddaughter, Elizabeth I, is also said to have kept small Beagle-like dogs, standing about eight inches high, that she carried around with her tucked into her sleeves.

Beagle-like dogs are also believed to have been used briefly in the 1500s for fox hunting, but they soon fell out of favor because their stubby little legs kept them from moving quickly enough to outrun the foxes. These dogs, though, are believed to be the forerunners of today’s Beagle.

Today, two types of Beagle are recognized by the American Kennel Club. Both are considerably taller than their ancestors, with the “15-inch Beagle” standing 13-15 inches at the shoulder and the “13-inch Beagle” standing no more than 13 inches. Beagles, depending on their height, typically weigh anywhere from 18 to 30 pounds.

Beagles are typically gentle, and very smart. They often want to be the boss in the relationship, though, so they can be a bit hard to train. Even if you use treats to train your Beagle, it might only result in temporary obedience until he thinks he can get something over on you. A fully-trained Beagle is a pleasure to own, but you’ll need a good deal of patience to get him to the point of being completely trained.

As is the case with virtually every type of purebred dog, Beagles are prone to certain health issues. These are the most common:

With this disease, the problem is compression of the spinal cord. It could cause back or neck pain, or in serious cases, paralysis and loss of bladder and bowel control. Depending on the severity of the condition, surgery could be required to relieve the pressure.

This condition occurs when the thighbone and hip joint don’t fit properly. It may be a minor inconvenience to the dog, causing little discomfort (easily treated using an OTC pain reliever recommended by your veterinarian), or a serious condition, depending on the extent of the misalignment. It can cause lameness and lead to arthritis.

You have probably heard of this condition as it relates to humans, and it’s much the same in dogs. Glaucoma occurs when there is too much pressure from fluid in the eye – it fails to drain properly, and can cause pain and ultimately blindness. It can be treated with medication and surgery, but the outcome is not always favorable.

This degenerative eye disorder eventually leads to blindness as the dog loses the photo receptors in the back of the eye.

This is yet another eye disorder that Beagles can be prone to. It occurs when the dog grows an extra row of eyelashes that protrude and cause irritation. It can be corrected by freezing the excess lashes and then removing them.

Epilepsy is essentially the same in dogs as it is in humans. The seizures are scary to watch, but the condition can be managed using medication.

As you can tell from the name, this condition simply means that the dog is smaller than he should be. It can also be accompanied by other defects like abnormally short legs.

This is a disorder of the thyroid and can lead to a number of other conditions like epilepsy, lethargy, hyperpigmentation, alopecia, pyoderma and more. It is treatable, though, with medication and dietary modifications.

This condition is also sometimes called “slipped stifles,” and it’s very common in small dogs. It occurs when the femur, tibia and kneecap don’t line up properly. If your Beagle has this problem, you’ll probably notice that something is off with his gait – he might seem to hop or skip. The condition can be minor, or so severe that surgery is needed.

As is the case with all dogs, if you’re looking for a Beagle, you should find a good breeder who will allow you to see both parents, or if the sire is not on-site, at least the dam. Never buy a puppy if you can’t see at least one parent – that’s a sure tip-off that you’re buying from a puppy mill, and it’s a pretty safe bet that doing so will bring you a ton of heartbreak. You’ll probably end up with socialization issues at best, and perhaps even serious health problems in your dog.

Good breeders should also be able to show you health clearances for issues that are common to the breed, so with Beagles, you should be sure to ask about hip dysplasia and eye issues.

Caring for Your Beagle

If you have a Beagle, then a fenced yard isn’t just an option – it’s a necessity. Even if your Beagle is superbly trained, there’s a very good chance that once he’s on the scent, he’s going to run – after all, it’s what he was bred to do. There have even been reports of Beagles being recovered 20 miles or more away from their homes. Microchipping is also advisable. Don’t waste your time or money on underground fencing for your Beagle – if he catches a scent, he’ll consider the shock a perfectly acceptable tradeoff for the pleasure of heading off into the great unknown.

Obedience training is essential for a Beagle. Beagles are quick learners and eager to please, but again, please assume that if he catches a scent, there will probably be no reward great enough to bring him back.

Beagles can also be strong-willed, especially in the early years. As he ages, the Beagle will become more inclined to laze around the house, though, and this is when you’re going to have to watch him for undesirable weight gain and maybe be a bit more vigilant about controlling his diet.

Moving right along, if you’re feeding your Beagle on a schedule, the conventional wisdom suggests that you should give him .75-1.5 cups of good dry food each day, delivered over two feedings.

Keep in mind, too, that Beagles are notorious thieves, and if you leave anything out, be it food or garbage, your Beagle will probably get into it and eat himself stupid. This means that he’s at a really high risk of getting fat. If you’re concerned about your Beagle’s weight, take a look at him, and then run your hands down over his back and ribs.You should be able to see a clearly-defined waist, and you should be able to feel (but not see) his ribs. If you have to press in hard to get the feel of his ribs, he’s too fat, so cut back on the food and make sure he gets a bit more exercise.

AKC standards are pretty flexible when it comes to the Beagle, but the most common configuration is tri-color markings along with a black saddle, a white chest and belly, tan on the head, and a white-tipped tail. Beagles also have a double coat, so they need to be groomed weekly at least to get rid of dead hair and encourage new growth.

Beagles need to have their ears cleaned regularly. They should also have their nails trimmed bi-weekly unless they’re typically exercising on hard surfaces that would work to naturally wear down the nails. Since Beagles can be very assertive dogs, you should start early with the grooming protocol. Make sure that you handle his paws often so that he won’t be resistant to nail trimming.

Other Pets and Children

One of the most wonderful things about Beagles is the way that they will bond practically instantly to just about anyone in your family, including other animals. If you have a cat, a Beagle is not likely to give you any problems. He’s probably just going to think “Oh, wow, you got me a kitty!” And when it comes to kids, Beagles love them. The only thing you might have to watch out for is over-exuberant play. Beagles can be a bit mouthy, and they often think it’s great fun to grab onto someone when it’s playtime. Sometimes, this scares kids.

Beagles can also be a bit grabby when it comes to their food, or when they’re wakened suddenly, so it’s important to tell your kids not to interfere with the dog when he’s eating, or to suddenly drag him up out of a sound sleep. No matter how friendly your Beagle is, he might not take these actions kindly.

Of course you should never leave a young child alone with a dog of any breed, and Beagles are no exception. So supervise your kids and your dog.

Remember That Beagles are Family Dogs

The other thing you need to remember about your Beagle is that he is very much a family dog. Because he’s going to be so bonded to you, your kids, and the other animals in your household, you shouldn’t leave your Beagle by himself for long periods of time. Beagles are very much pack animals, and hate being left alone.

Is a Beagle Right for You?

If you’re troubled by the idea of chasing down a dog when he runs off because he’s found a wonderful smell, then you probably won’t do well with a Beagle. On the other hand, if you love the idea of having a small, cuddly creature that will love you and the rest of your family to distraction, and will amuse you with his funny antics and great sense of humor, you just might be the right person to invite a Beagle into your life.

Beagles are smart, but they can also be stubborn. There’s not a mean bone in a Beagle’s body, though, so if you have a bit of patience and a lot of love to give (and want to receive a lot of love in return), consider this sweet little dog. He’s got a lot to offer to the right person.