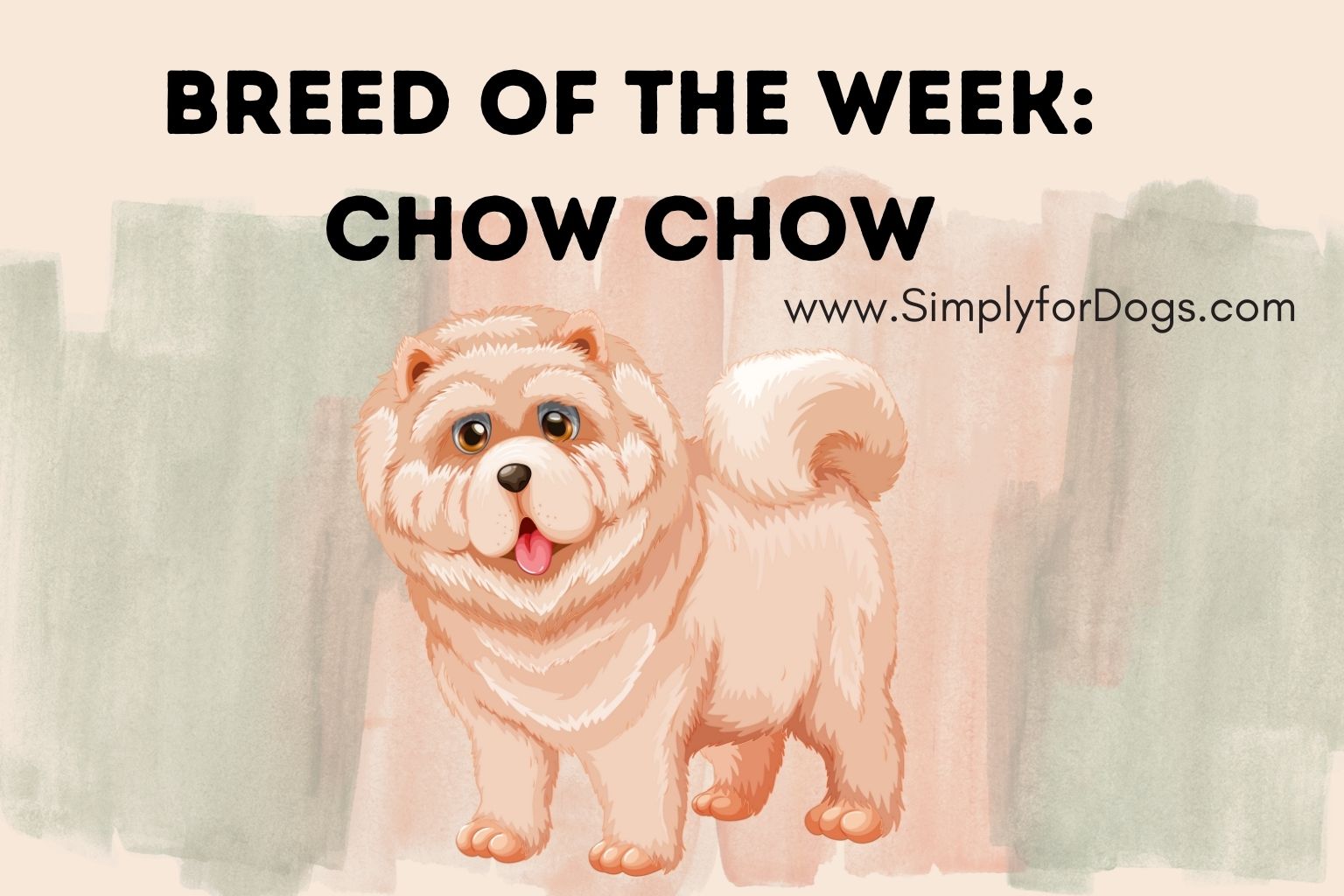 The Chow Chow is, by any standard, a magnificent-looking dog. He is graceful, resembles a lion, and holds himself with a dignity that is unsurpassed. In fact, he looks regal, which probably accounts for the fact that his history goes back to the point of being kept by Chinese royalty – in fact, one Chinese emperor is believed to have kept 5,000 Chow Chows as hunting dogs. The Chow Chow’s most distinguishing feature is his blue-black tongue. Chow Chows typically stand anywhere from 17-20 inches at the shoulder, and can vary quite a bit in weight – anywhere from 40-70 pounds.

The Chow Chow is believed to be one of the oldest breeds, having originated in Northern China and Mongolia, and moving to other parts of Asia with nomadic tribes. As early as 206 BC, depictions of the Chow Chow have been found in paintings and on pottery.

In the 18th century, British sailors began to include the Chow Chow in their cargo, and by the latter part of the 17th century, Chow Chows were being imported regularly. Queen Victoria, who is almost as well known for her love of dogs as she is for the phrase “We are not amused” even took an interest in the breed.

In America, the Chow Chow was recognized by the AKC as a breed around 1920. President Calvin Coolidge owned two Chow Chows, a black one named Blackberry (no points for originality here; sorry, President Coolidge!) and a red one named Timmy. More recently, Martha Stewart is known to be devoted to the breed, and sometimes even features her Chow Chows on her television show.

Chow Chows are not what could be termed “snuggly” dogs. As I mentioned in 5 Things You Should Know About How Dogs Interpret Human Body Language, most dogs don’t like to be hugged. Some do, but they’re in the minority, and when it comes to Chow Chows, it’s best to assume that they’re in the ‘Don’t hug me” category. A Chow Chow is also not usually disposed to tolerate rough treatment, so he’s not usually a good choice for families with young children. Chow Chows can be incredibly loyal, and that loyalty will extend to every member of the family, kids included, but he typically does better with older children.

When it comes to Chow Chows, it’s very important to begin socialization early. This is because the breed is very protective, and very territorial, so it’s best to get him used to strangers as soon as possible. Otherwise, he might not react well.

One thing about the Chow Chow, though, is that if he is about to react to a stranger with disfavor, he will let you know before it happens. I’ve mentioned my friend Neila many times, and talked about her Rottweilers. She always makes sure that her dogs are very well socialized, because as she points out, “They’re not likely to give you any grief, but if they’re going to, they won’t warn you.” A Chow Chow, on the other hand, will definitely let you know if you’re ticking him off. You’ll get growling, baring of teeth, aggressive body language – in other words, everything you need to know to indicate to you that you should step away.

Now, having said that, you also need to know that most Chow Chows aren’t aggressive. They’re most likely to just mind their own business, and they don’t go looking for conflict. The only time you’ll be in trouble with a Chow Chow is if you enter his person’s property without an invitation and his person doesn’t welcome you. Then, he’ll probably challenge you.

There is no such thing as a purebred dog that isn’t prone to certain health issues, and Chow Chows are no exception. However, unlike many other breeds, there are only a couple of health issues that are common to Chow Chows. The first is hip dysplasia, which is also common in many other breeds. Depending on the severity of the condition, you might not even have to worry about it, or it could be so bad that euthanasia is the best alternative. Even the best breeder will not be able to guarantee that your Chow Chow will never develop hip dysplasia, but he or she should be able to provide documentation warranting that the parents are free from the condition. Your puppy should also be vet-checked before purchase to eliminate any early signs of the disorder.

If your Chow Chow does end up showing signs of hip dysplasia, don’t assume that it’s a death sentence. Many dogs with this condition live long, happy lives with little or no discomfort, and even in more serious cases, the condition is often managed using medication.

Entropion is another condition that Chow Chows can be vulnerable to – it causes the dog’s eyelids to turn inward, irritating the eyeball. Even if the condition is severe, it can be corrected surgically.

Like all dogs, Chow Chows need to be exercised in order to be happy, and should live indoors with their people, not in a backyard kennel or doghouse. Chow Chows are not terribly active dogs, though, and are usually content with just a couple of walks (15 or so minutes) per day.

Crate training is also much as it is for other dogs – it’s a good way to prevent accidents in the house, and keep your dog safe when you’re not at home. Don’t use the crate as a “jail,” though – your Chow Chow wants to be with you.

Chow Chows are highly intelligent, and they’ll easily learn just about anything you want to teach them. One thing that’s very important with this breed, though, is that you should only ever use verbal corrections. In Is There Ever a Good Reason to Hit Your Dog? I came down firmly by saying NO. Never. This is even more important with Chow Chows. They respond, more than any other breed, to respect, and absolutely reject any form of abuse. You might be able to use force on a Chow Chow puppy and make him do what you want, but trust me, when he reaches his full growth, if you pull that crap you’ll be in for a world of trouble. And you’ll deserve it.

As I’ve said so many times before, I free feed my guys, flying in the face of my vet’s recommendations – Stephen and I agree on so much, and we’ve just finally had to disagree on this matter. I’m going to free feed; he’s going to disapprove, and in the final analysis he’s going to admit that I’m not likely causing my dogs any harm.

If you’re concerned about your Chow Chow’s weight, and wondering if he’s too big or too small, just do the eye-and-hands test. Stand over him, and look down. You should see a clearly defined waist. Now, put your hands on his back, spread your fingers downward and keep your thumbs on his spine. You should be able to feel his ribs, but you shouldn’t be able to see them. If you can see his ribs, then he needs more food. If you can’t feel them, though, then you need to cut back on the food and make sure that he gets more exercise.

Chow Chows usually have a rough coat, with a wooly undercoat, and thick hair around the neck and head which gives them their lion-like appearance. There is also another variety of Chow Chow, though – the smooth-coated type, which has (as you might suspect) a smooth coat and no thick hair around the head and neck.

Regardless of type, the Chow Chow has five coat colors – red, cinnamon, blue, cream and black. Now, if you’re shopping for a Chow Chow puppy, don’t let a breeder sucker you into a “rare” coat color. If you hear “silver,” “champagne,” “lilac,” “white” or “chocolate,” and the breeder tells you that you have to pay more because these are “exotic” colors, find another breeder. These are just other names for the standard colors, and if the breeder is trying to con you in this way, they’re probably trying to con you in other ways as well.

You should brush your Chow Chow at least 3 times in any given week in order to control shedding and keep the coat in proper condition. Chow Chows also shed in a huge way twice a year, and at that time you’ll need to brush more frequently.

Because of the length of the coat, you’ll also probably want to bathe your Chow Chow regularly – once a month is a good rule of thumb. Some breeds can actually live their whole lives without ever being bathed, but the Chow Chow is most definitely not one of them, so if the idea of regular bathing is problematic for you, you should consider another breed.

The rest, when it comes to grooming your Chow Chow, is much the same as for any other breed – brush his teeth a couple of times a week, trim his nails when it gets to the point where you hear them clicking on hard surfaces, and make grooming time fun with treats, praise and petting.

If you have young kids, and you want to introduce a Chow Chow into your home, you’d better be sure that you train the kids before you worry about training the dog. As long as the little ones are gentle with the dog, you probably won’t encounter any problems, but Chow Chows do not always integrate well into families where there are young, exuberant children. Usually, they’re best introduced into a household with older children who understand the potential consequences if they handle the dog roughly.

As to other animals, Chow Chows often get a bad rap – they’re almost in the same category as Pit Bulls and Rottweilers when it comes to misconceptions about the breed. The reality is, if you’re careful and patient, there’s no reason why your Chow Chow won’t be able to co-exist with your cat, or with a smaller dog. Usually, though, it’s best to introduce a Chow Chow puppy to an older dog rather than the other way around. It’s also best, if you’re planning on a multi-dog household, not to have intact Chow Chows in contact with other intact dogs of the same sex. This is true of any breed, though.

The Chow Chow is a beautiful dog, fiercely loyal and beyond protective. If you are introducing one into a household with kids, though, be sure that they know how to treat the dog respectfully. Chow Chows do not respond well to rough handling. Chow Chows also need early socialization even more than most other breeds. In the right hands, though, Chow Chows can be wonderful companions and superb family dogs.