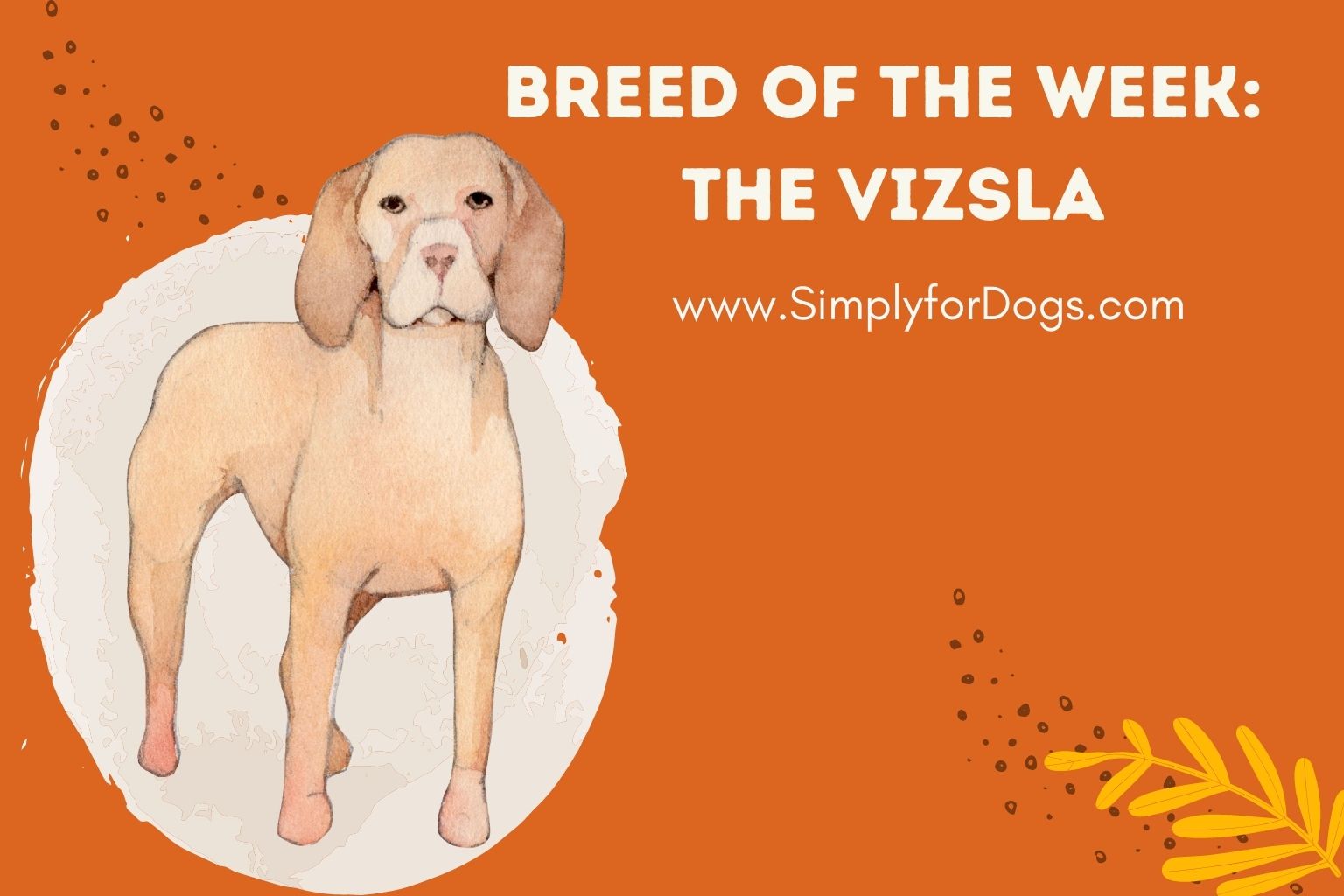 This week, I’m going to talk about a fairly rare breed – the Vizsla. This is a Hungarian dog that was originally bred as a retriever and pointer but has since come to be prized as a family pet. In fact, the Vizsla is often called the “Velcro dog” because of the way that he bonds to his people. If you don’t want a dog that would like to be “attached” to you all the time, you should probably choose something other than a Vizsla, but if you love being loved, this could be the dog for you!

The Vizsla is sometimes referred to as the “Hungarian Pointer,” and he descends from Magyar hunting dogs. The breed is actually probably about a thousand years old. Images of this type of dog can be found on 10th-century artwork

As of the late 1800s and early 1900s, the Vizsla came to be recognized. He was used during the First World War to deliver messages, but once the war was over, his popularity declined. By the 1950s, though, the breed enjoyed a resurgence in popularity, and in 1960, the AKC recognized the breed.

Today, the Vizsla enjoys the distinction of working as a rescue dog, most notably post-9/11 at Ground Zero, where they worked to find survivors amidst the rubble.

Vizslas are typically affectionate, gentle and intelligent. They love being with people, but they can be a bit stubborn. Left to their own devices, Vizslas can be destructive, so you have to be vigilant about making sure that he has the right training and enough companionship.

As is the case with many dogs, it’s very important to socialize your Vizsla early on. You want to make sure that he gets along with humans, so expose him to a lot of different people as he grows up.

Vizslas are generally healthy dogs but can be prone to certain conditions. Not every Vizsla will develop any of these conditions. They’re just things to keep in mind.

This is a seizure disorder that is not curable but can be managed. Most of the time, dogs that have epilepsy can live very fulfilling lives provided that they are given medication to manage the condition.

This condition is inherited, and is common in many large breeds. It occurs when the hip and thighbone are out of alignment. Some dogs might end up being lame, while others will go through life displaying no symptoms at all.

Dogs don’t typically present with hip dysplasia until they are at least two years old, so you could very well end up with a puppy that seems fine at the outset and develops the disorder later on. The best way of determining if your puppy is vulnerable to hip dysplasia is to ask the breeder if it’s present in the breeding stock. A good breeder will be able to show you clearances on the parents.

If you should happen to find out, later on, that your dog has hip dysplasia, you should not breed him or her.

This is a low level (abnormally low) of thyroid hormone. Symptoms can include coarse, brittle fur, droopy eyelids, mental dullness and infertility. There is no cure, but a dog with hypothyroidism can live a full, happy life. He should not be bred, though.

This sounds pretty scary because of the “sarcoma” thing; you know that means cancer! It’s very treatable, though, and with chemotherapy, a full 80% of dogs that are affected can expect to go into remission.

This is an eye problem that will eventually result in blindness. There is no cure. If you think your dog might have this disorder, you should have him evaluated, and if he checks positive, you shouldn’t breed him. That said, though, there’s no reason why a dog with PRA can’t have a good life; dogs aren’t all that different from people when it comes to using their other senses to compensate for the loss of one.

Vizslas need a lot of exercise, so you should try for at least a half an hour twice a day in the form of a run or vigorous games.

Never handle your Vizsla harshly; he’s not going to respond well to that. He needs a lot of praise and rewards to become a good dog. Also, don’t leave him out in the yard; he’s a “people dog” and needs human companionship. Ideally, your Vizsla should have a fenced-in yard where you will spend time with him.

I free feed, and I’m not going to stop. But I know that other “dog people” sometimes like feeding on a schedule, so if this sounds like you, give your Vizsla 3-4 cups of good dry dog food each day, broken up into about 1.5-2 cups per meal. Remember, though, that how much food your dog is likely to need will depend on how big he is, how active he is, and how old he is.

If you’re worried about your Vizsla’s weight, just take a look at him. Stand behind him, with his butt between your legs, and reach down to determine if you can feel his ribs. If you can, you should probably give him more food. If you can’t feel his ribs, chances are he’s a bit too “porky” and you might want to cut back.

Vizslas are easy to groom. Just brush them out once in a while, and don’t worry about bathing; they hardly ever need it.

Vizslas are very friendly dogs, and tolerate children well. They are, however, fairly exuberant, so they might not be suitable for young kids; a Vizsla wouldn’t deliberately hurt a child, but because of his size, could knock over a toddler.

Of course, the main thing with kids and dogs is that you should always teach children how to approach a dog, and you should never leave a child unattended with any dog. The gentlest dog in the world could react badly to tail or ear pulling, and you can’t really blame them in that scenario.

Kids should also be taught not to wake dogs when they’re in a sound sleep or to interrupt them while they’re eating.

As to cats, Vizslas will usually get along with them. They’re not so good with small animals like gerbils or hamsters, though, so it would probably be best to keep them segregated.

Vizslas can be wonderful family dogs. They’re very cooperative and responsive to training (although sometimes stubborn). They’re good with kids, too, and make great family pets. Just keep them away from the rodents in your household, and you’ll do fine with a Vizsla.