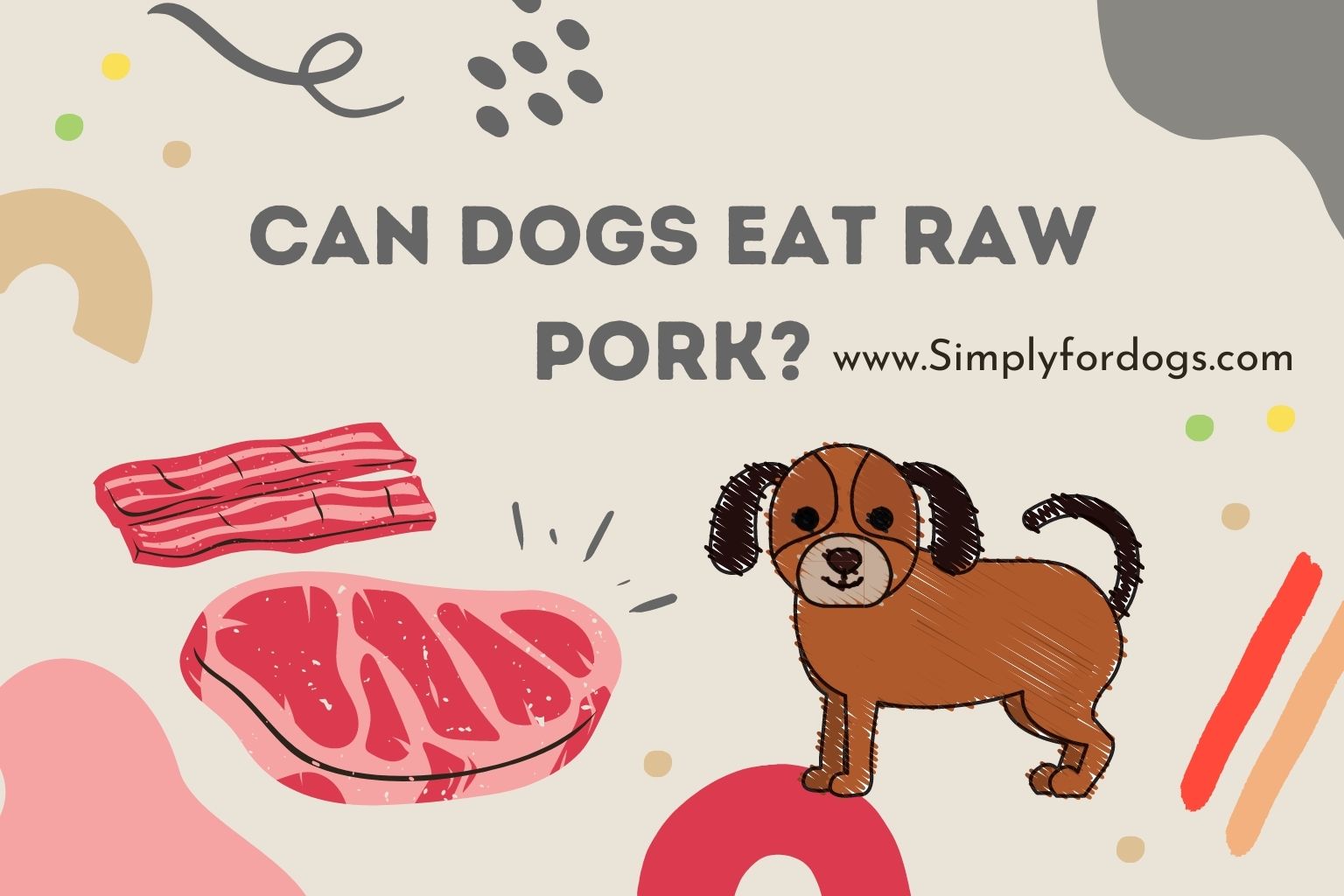 Feeding dogs raw pork is controversial among many veterinarians and dog owners. Though raw pork was extremely dangerous for both humans and dogs to consume in the past, many agree that with today’s laws and farm practices, raw pork has become a great addition to your dog’s diet.

The rest of this article will explain the health benefits of raw pork, why many believe it to be dangerous, and what you should know before introducing it to your dog’s raw diet.

Raw meat has been proven to be easier to digest and more nutritious than cooked meat, as cooking changes the composition of the fat and protein structures.

As time has passed, raw diets have become increasingly popular for furry friends. Overall, it’s an incredibly healthy diet for most dogs and other animals to eat, but only if it’s done right.

Many dogs enjoy feasts of raw rabbit, chicken, and lamb, but there has been a lot of discussion over the years about whether other raw meats, such as raw pork, are good to add to your dog’s meal.

Is Raw Pork Safe for Dogs to Eat?

Unfortunately, this answer is still up for debate depending on what vets and pet owners you ask.

As the introduction of a raw diet has become more popular, many pet owners have been asking if all raw meat is safe for dogs.

According to some, raw or undercooked pork is extremely dangerous for your dog, as it can contain a deadly parasitic worm. But, of course, many will say that this is a myth or a fact that has long died out.

In order to get to the bottom of this, let’s take a look at the reasons many believe pork is not suitable for dogs.

Long ago, when farming wasn’t as regulated as it is now, pigs raised on farms were usually fed anything farmers could feed them. Unfortunately, this included garbage other dead animals, among other questionable items.

This led pigs to develop a toxin in their body called trichinosis, and because pigs cannot sweat, they had no way of expelling this toxin. This led to the toxin infecting their body, stored in their muscle tissue, and spreading to anyone who consumed the raw meat, which many times happened to be raw-fed dogs.

Although this was an entirely reasonable worry at the time, these days, factory-farmed pigs are incredibly regulated. Pig farmers are required to feed pigs regulated animal feed. This cuts out the fear of the deadly parasite, and there are very few cases of trichinosis.

That being said, you should never feed your dog wild boar or pig from unregulated sources, as this could lead to your dog being infected by harmful bacteria and lead to serious health problems.

Trichinosis is a life-threatening condition anyone can catch by eating undercooked or raw meat that was infected with the larvae of the trichinella roundworm.

These larvae grow in animals who consume the muscle meat of other infected animals. This is most commonly found in bears and, these days, wild pigs.

More severe symptoms can include chills, coughs, headaches, swelling in the eyes and face, itchy skin, muscle pain, and constipation.

If you are still worried about this but would like to add uncooked pork meat to your dog’s diet, there is still an option for you.

Freezing your pork meat for up to three weeks will kill off all toxins that may still be left, making it safe for your dog to eat.

Many pet owners believe that pork is a fattier, unhealthy protein compared to lamb or chicken. Unfortunately, this can sometimes be true, depending on what cut of meat you feed your dog.

Although humans enjoy bacon, it will be higher in fat than other cuts of pork. If fed in minimal quantities, this is an occasional okay treat for your dog, but it should not be given to them all the time.

If you trim off the pork fat, it’s considered to be a great source of lean protein for dogs fed raw diets.

Though many assume that pork has a high-fat content, it’s just as good for dogs as chicken is.

If you are still worried about feeding your dog too much fat, there are some specific options you can go with.

Pork tenderloin, pork chops, and pork roast are all very lean cuts of pork and are actually usually leaner than a chicken thigh.

Since many people believe that pork is high in fat, many blame raw pork for the development of pancreatitis in dogs. However, this has been found not to be true.

Pancreatitis comes from excessive fat consumption. Most dogs who suffer from this are often overfed, have an overall high-fat diet, and have a history of previous disease.

The simple fact is many cuts of raw pork have less fat than raw chicken and other raw meats. That being said, any dog with a very fatty diet is at risk of pancreatitis.

Pork has so many great health benefits for your dog and should absolutely be considered when feeding your dog raw meat.

Not only does pork contain more vitamin D than lamb, but it also contains less sodium, which is not suitable for your canine in large quantities.

Dogs can eat cooked pork as long as it is prepared with no added fats, oils, condiments, seasonings, or spices.

Lean cuts of pork can be a great addition to your dog’s dog food, but cooking it in more fats and oil will lead to it being higher in fat and, therefore, could lead to weight gain over time.

Pork covered in BBQ sauce should never be fed to your dog, as it contains many ingredients, like garlic and onion, that is very toxic to dogs.

Only feed pork to your dog if it is plain pork in order to make sure that your dog does not get sick. Cooking meat will diminish some of the nutritional benefits but will still be good for your dog.

As many of us are aware, dogs love chewing on bones. Therefore, cooked pork bones should never be given to your dog at any time since they become hard and can splinter into sharp pieces that can hurt your dog if consumed.

Raw pork bones are okay for dogs to eat, depending on the dog. If your dog does not tend to consume bones, pork bones, if raw, should be okay to allow your dog to eat. It is always a good idea to supervise your dog no matter what kind of bone they are eating, even raw bones.

No matter what, the bones are a choking hazard for many dogs. Call your vet immediately if your dogs eat pork bones and see that they have issues.

Will the Bones Break My Dog’s Teeth?

Depending on the dog, pork bone could cause damage to your dog’s teeth. Therefore, it is essential to be careful giving these to your dog and to supervise them.

Can My Dog Get Sick From Raw Meat?

According to Dr. Laura Duclos, a vet who spoke to Nature’s Variety, a raw dog food company, trichinella in commercial pork products is virtually zero.

Most dogs and humans have only gotten sick when eating wild boar or pig sold from unregulated farmers who don’t follow the rules.

As with any meat in a balanced diet, you should slowly introduce your dog to new foods.

How Much Pork Can My Dog Eat?

As mentioned earlier, you should start introducing pork to your dog’s homemade dog food in small amounts to see if they have any reactions.

If you give your dog raw pork, just make sure that they do not have any reactions to it since some dogs have food allergies.

Is Preserved Pork Okay for Dogs to Eat?

Although we humans love ham and bacon, it is not safe for your furry friend to eat, as they both have high-fat content and a lot of sodium.

According to the World Health Organization, processed meats are known carcinogens that have been linked to cancer. On top of that, they are rich in fats and can be too much for your dog’s stomach to handle.

Why You Should Always Freeze Raw Meat

As mentioned previously, raw meats should be frozen before being consumed. This is true for any meat your dog will eat raw, but especially pork!

Before adding it to dog food, freezing meat will ensure that parasites often found in swine will be killed off. Other parasites your dog can acquire from raw meat are whipworms, nodular warms, kidney worms, and lungworms.

It is unlikely that your dog will pick any of these parasites up, but it is essential that you freeze the meat nonetheless.

Other Parts of Pig Safe for Dogs to Eat

If you have your dog eating raw, there are several other parts of the pig that they can eat. These include the pancreas, kidneys, spleen, liver, lungs, brain, and reproductive parts.

Dogs can also safely consume the heart, trachea, tail, rib bones, and tongue of a pig if they are eating raw meat.

Those who love dogs will understand that there’s always a fear of feeding their dog something that is not good for them. So understandably, many have stayed away from allowing their dogs to eat pork.

That being said, many of the fears associated with pork come from issues the pork industry has moved far away from, and it can be quite nutritious for your furry friend now!

Make sure that you are sourcing your pork from a great farm that abides by guidelines. Dogs can eat both raw and cooked pork but make sure that cooked pork is not cooked in excess fats and oils and plain.

As with any meat, some cuts of pork are higher in fat than others. Make sure that you are not feeding your dog more fat than they should be eating so that they can continue to live a happy, healthy life.