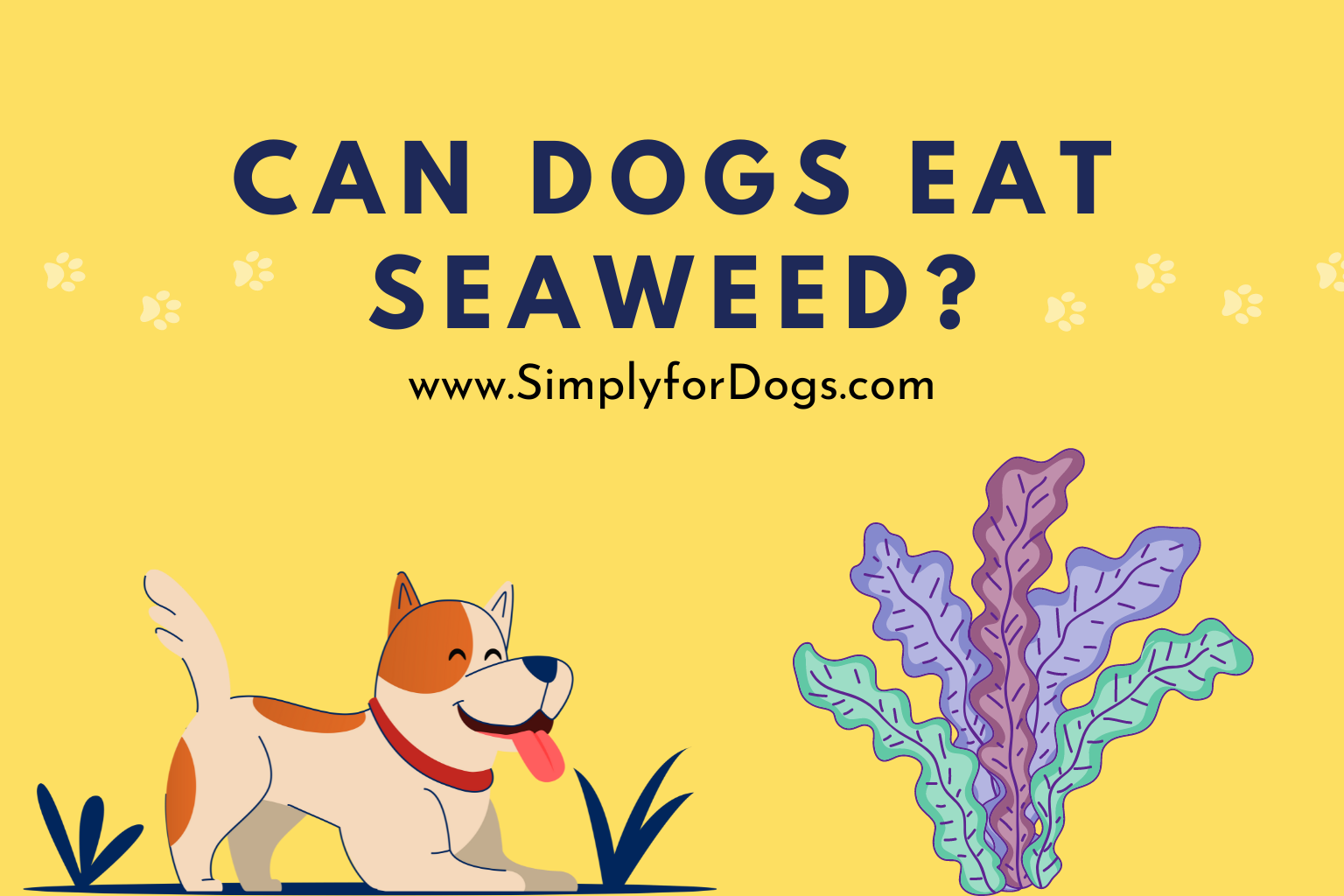 Seaweeds or sea vegetables are marine algae that humans use for a number of purposes. They have extensive use as human food and are one of the ‘Superfoods’ out there. From being the part of salads, soups, and sushis, they make their way to almost every kitchen.

Agar derived from these marine plants is being used as a substitute for gelatin and is used for making jellies. For years, seaweeds have been traditionally used in many parts of the world as medicines and are still used in many diet pills.

Being so popular in our kitchens and served as soups and sushis in restaurants worldwide, people often ask if their dogs can also consume seaweed or not. Read the information below to know.

Yes, dogs can eat edible seaweed sheets and any seaweed supplement. Not only are they safe, but also provide many health benefits. Seaweed is of many types, but edible ones include the following:

Seaweed snacks can be easily found in the “Asian Cuisines” section or simply the salty snacks section of your nearby grocery store. These are the roasted or fried seaweeds that are available in a wide variety of flavors and by a number of different manufacturers.

But not all the flavors are safe for your dog. If you want to give your dog seaweed snacks as an occasional treat, you can visit a specialty food store that will certainly feature a wide variety of flavors.

To treat your furry friend, you can buy some dog-safe flavors from all the available flavors. Although the plain ones are fine, flavors like onion, garlic, and lime & chili are not suitable for canine consumption. Other flavors like wasabi, sea salt, and teriyaki should only be fed in small amounts.

Because these snacks are actually deep-fried, usually high in fats, and highly processed seaweed forms, too many of them are bad for your dog.

Wild seaweed found on the beach is not good for the dog. Though they don’t have any dangerous toxins, they can pose some health hazards due to the pollutants they have accumulated over time. Beach sand is rich in metals and minerals like silica, titanium, arsenic, calcium, and manganese.

Those seaweeds growing on such sand take up these metals. They eventually reach your dog’s stomach if he has ingested seaweed. These heavy metals can cause nervous disorders and kidney problems, disturb the immune system, and even cause cancer.

If your dog has eaten wild seaweed, take him to a vet for emergency treatment to prevent any potentially life-threatening condition.

After collecting this sea vegetable, it is often dried. Dried-up seaweed is less prone to decomposition and has greater shelf life than a fresh one. Dried seaweed has zero water content hence can cause dehydration in the dogs.

In addition to it, dried seaweed has nutrients in greater concentration as compared to the same weight of fresh and wet seaweed; hence the former one adds more nutrients to the dog’s diet. A spoonful of dried-up seaweed can fulfill your dog’s daily nutrition. Though one can sprinkle a pinch of dried seaweed on the dog’s food, it’s not safe for dogs in large amounts.

Yes! Dogs can eat seaweed in raw form. Since this ocean vegetable is commonly eaten raw by most people, pets can have it too. Although both nori and kelp can be eaten raw, most dogs will probably not like the rubbery texture of these algae.

However, if your dog likes its taste and texture, raw seaweeds are likely to provide a number of healthy nutrients to him as these are extremely rich in organic nutrients, minerals, and vitamins. Though eating beach seaweed in any form can cause health hazards to your pup because they have absorbed a number of pollutants and harmful chemicals.

Furthermore, giving the dog unprocessed strips of these sea vegetables can cause choking hazards; hence it is better to sprinkle some ground seaweed if you really want to add it to his food.

Can I Cook Seaweed for My Dog?

If you want to feed your dog seaweed in the cooked form, you can do it without any concerns. In fact, boiling and steaming these sea vegetables can reduce some amount of heavy metals. Another way is to combine seaweed supplements with a heavy metal detox diet.

The only thing you need to take care of is to keep onions and garlic away from their diet. Both of them have a toxic compound in them that binds with the hemoglobin and reduces its oxygen-carrying capacity.

Unfortunately, the same compound can also break down the red blood cells resulting in anemia. The condition becomes severe with a reduced blood supply to the organs and other complications. In the same manner, keep other spices like nutmeg, cinnamon, chives, paprika, etc., away from the dogs.

Eating seaweed can give your dog a lot of benefits due to its nutritional value.

Seaweed has iodine in large amounts. This mineral is required to produce thyroid hormone from the thyroid gland. This hormone regulates the metabolic rate of the body. Fewer iodine results in an extremely slow metabolism, and high amounts of it result in increasing the metabolic rate.

It also has zinc and is a great choice if you want your dog to have incredibly healthy skin. Not only healthier skin, but it also provides a healthy immune system. In addition, small quantities of calcium strengthen dogs’ teeth. It has other minerals like potassium, iron, and magnesium too.

It is necessary to add antioxidant-rich stuff to your dog food. When a dog metabolizes his food, certain free radicals are produced in his body. These radicals can increase the body’s oxidative stress and cause various harm. Antioxidants play a key role in neutralizing these radicals and protecting the cellular structures from damage. Seaweeds have vitamin A, C, E, certain carotenoids, and flavonoids as antioxidants. All these compounds make seaweed for dogs a great choice.

Fucoxanthin is a carotenoid and a major pigment of brown seaweed. It has great antioxidant properties and protects the dog’s body from fatal diseases like cancer, diabetes mellitus, and cardiac diseases. It also helps prevent inflammation due to its anti-inflammatory properties. Fucoxanthin has also been found to be able to burn fats. Hence, it can prevent obesity.

Just like other green vegetables, this sea veggie has fibers in adequate quantities. They help digest and pass food through the digestive system smoothly. They also treat constipation and diarrhea, making seaweed safe for dogs. Fibers also lower the level of cholesterol and maintain the dog’s health.

Too many calories in pet food can make your dog obese, especially if his consumption is more than his physical exercise. For overweight dogs, a seaweed diet can turn out to be helpful in losing weight as it is low in calories. In a nutshell, a seaweed diet can provide your dog with most of the necessary nutrients without adding too many calories to its nutritional chart.

Seaweed is generally safe for dogs, but it can put him at risk of several health hazards if not consumed in the right amount.

Dried wild seaweed can cause intestinal blockage in dogs. When a dog ingests this variety, it absorbs water from the dog’s body fluids and expands. Due to its expansion, it blocks the intestinal pathway. As a result, its symptoms include vomiting, diarrhea, loss of appetite, dehydration, bloating, and abdominal pain. Another sign is that dog becomes aggressive when you touch his abdomen.

Intestinal blockage can kill your dog within 3 to 5 days. So, if someone asks can seaweed kill dogs? Tell him yes, dried wild seaweed can.

You must have experienced it yourself that seaweed tastes salty. It is because of its high sodium content. Moreover, seaweed grows in seawater which is high in salts. So it adds even more salts to it and makes seaweed bad for dogs.

Too many salts can cause salt poisoning in dogs. Common symptoms of it include vomiting, diarrhea, lethargy, excessive thirst, and urination. Salts disturb the osmotic balance of the cells, due to which muscles lose their moisture and become stiff. The severe conditions of poisoning can cause tremors, seizures, coma, and even death.

If your dog has eaten seaweed in large quantities, he is definitely going to suffer. It can result in salt poisoning and affect thyroid function due to excessive consumption of iodine. In addition, iodine in large amounts can cause inflammation of the gland and make it susceptible to cancer. Besides these, the dog will suffer an upset stomach and disturbed gastrointestinal function accompanied by vomiting and diarrhea.

Hence if a dog eats seaweed in moderate quantities balanced with other diets, it’s an excellent choice for his health.

Edible seaweed is safe for dogs and provides many benefits to the dog’s body. It strengthens the dog’s skin, teeth, vision, and immune system. In addition, being free of cholesterol and low in calories generally does not cause any harm. As long as a dog eats seaweed in moderate amounts, it is safe for him. But too much consumption can put your dog at the peril of certain diseases like stomach upset, salt poisoning, and disturbed thyroid function.

Though adding dried seaweed to the dog food is not safe for your pup. Dried seaweed absorbs a lot of water from the body, resulting in dehydration and disturbing the body’s osmotic balance.