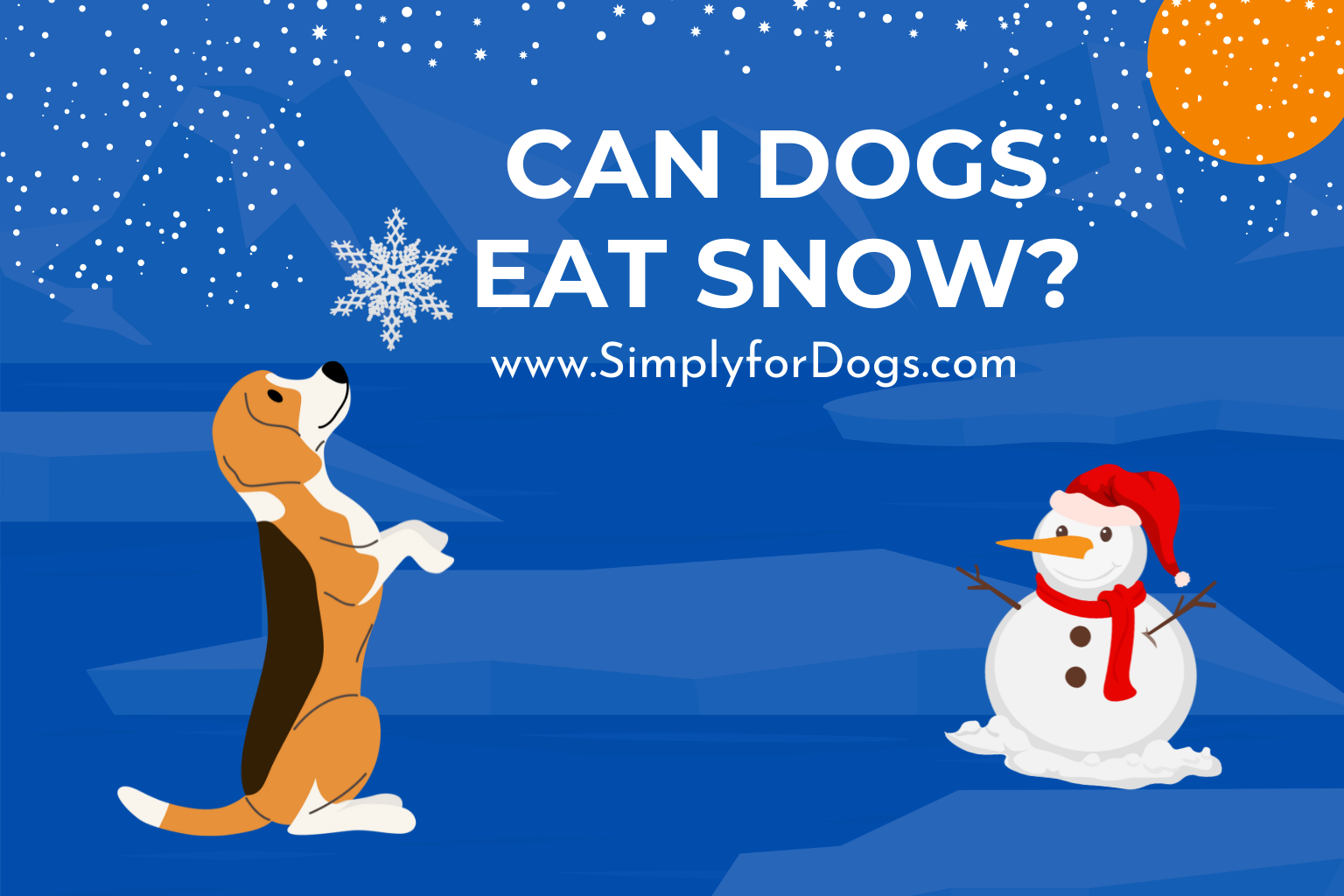 A hot drink or a hot dish sounds great during cold weather, but that’s your perspective. Your dog thinks entirely else way. If you take him out for a walk on a snowy day, he will start eating snow on his way. You are probably reading this article or a related post to know if it’s okay for your dog to eat snow. So, let’s find out.

Why Do Dogs Eat Snow?

Before knowing if it’s safe for dogs to eat snow, pet owners need to know why dogs eat snow. Though these reasons are not verified, and even experts are in doubt about them, these reasons have been concluded from certain observations.

Following are some of the reasons for a dog eating snow:

If you have not provided the dog water for some time and he feels thirsty after having a walk or physical exercise with you, he will start eating snow to kill his thirst. It is possible that the dog’s water bowl had water in it, and he’s still feeling thirsty. It is because he didn’t drink water. After all, it was not fresh. Not changing the water for a long time can make the bowl favorable for the growth of some mold and fungi. Some bacteria might also travel from his saliva to the water bowl and start growing in it. Not only does the bowl become dirty, but it smells awful. Your dog is probably not drinking water for this purpose. Hence you need to provide your dog with fresh water in a fresh bowl at least once a day.

If a dog feels sick, he starts eating snow. But, analyze his health; he might have Cushing’s disease. It is a health condition in which the adrenal gland overproduces a hormone named cortisol. Excess production of cortisol can cause kidney disease, high blood pressure, and diabetes mellitus. Symptoms of Cushing’s disease include excessive thirst, frequent urination, loss of appetite, loss of hair, weak muscles, and lethargy.

Moreover, when dogs have stomach upsets, they eat grass to induce vomiting and settle their stomachs. Actually, in a disease, dogs eat snow for the same reason. They are trying to seek the grass, but snow comes in the way during the winter season.

Due to Their Innate Behavior

Most dogs eat snow out of their innate nature. Their ancestor dog ate snow and consumed frozen water vapor to keep himself hydrated. Many dogs followed him and started eating snow. Dogs who followed their ancestors might neither be thirsty nor are sick and still eat snow. In short words, we can say eating snow is in their blood.

Is Eating Snow Safe for Dogs?

Yes, dogs can eat freshly fallen snow. It is perfectly safe in small quantities. The only benefit they will get is that their body remains hydrated. Otherwise, it provides no nutrition at all.

Never let your dog eat snow if it’s dirty. There is not only dirt in it, but it can also have harmful chemicals in it like fertilizers and pesticides. These chemicals get added to the snow from the grass. It can cause poisoning in them. The dog suffers from vomiting and faces difficulty in breathing. He gets ulcers in his gastrointestinal tract and burns on his skin.

Besides this, snow has dirt mixed with small twigs, branches of trees, garbage, soil-inhabiting parasites, animal waste, and other toxic substances. All these materials have adverse effects on the dog’s health. For example, it can result in an obstruction in the throat, upset stomach, and intestinal blockage. In addition, rocks and sharps can cut through the dog’s oral cavity and digestive tract.

Though fresh snow is safe for dogs, the snow that has been fallen for some time and has started melting is not safe for them. Usually, ice melts are dropped on the snow to make the way for the traffic. After their application, ice melts to a great extent and forms puddles. Eating snow or drinking water from these puddles can put your dog’s health in danger. In addition, the ice melts, or antifreeze compounds, have certain salts in them that can prove toxic for them. All ice melts are not created equal, but they do have some of the following salts:

A dog might be eating snow from a snow puddle to fulfill its thirst, but the amount of sodium chloride in it can trigger more thirst in him. The condition can turn lethal, and the dog might develop sodium toxicosis, also called sodium poisoning in them. This poisoning causes stomach upset and causes nervous disorders accompanied by dizziness, seizures, and severe headaches. In addition, the dog might suffer from tachycardia (increased heart rate), fever, convulsions, swelling in the oral cavity, and lethargy.

Potassium chloride in snow puddles is associated with certain risk factors in dogs. Although this salt is given to treat hypokalemia or low potassium levels in cats and dogs, its ingestion without hypokalemia can lead to many health problems in pets. High potassium levels in the body can result in diarrhea, vomiting, weakening of muscles, blood in stools, etc. For example, suppose your dog is suffering from kidney failure or liver disease. In that case, his body is already unable to dispose of metabolic wastes, and the accumulation of unnecessary potassium salts can add to the harm. A dog with cardiovascular disease or a sensitive stomach is also more likely to develop these problems due to potassium chloride intake.

Walking through a salted area in snowy weather exposes pets to all of the detrimental effects of magnesium chloride. The concentrated solution of this salt in water poses negative effects on the health of pets, people, and even wild animals. Your dog will come into contact with the salt and possibly get some on his paws. Magnesium chloride will get into his eyes if he touches or rubs his face with his salty paws. It irritates the eyes and causes them to burn. Burning of the skin, particularly around the mouth, is also possible.

The taste of this salt is sometimes appealing to dogs, yet consuming it results in an upset stomach and leads to diarrhea, nausea, and vomiting. Inhalation of the salt causes flu-like symptoms, difficulty breathing, coughing, and respiratory discomfort. Excessive exposure to this magnesium-based ice melt can be fatal to your dog.

Due to the application of an ice melt, especially rock salt, Melted snow will definitely have calcium chloride in it. Calcium chloride is not only toxic for dogs if ingested but also hurts the dog’s paws if he walks on it. The salt can accumulate on the paw pads and irritate. It can also cause a burning sensation in the paws.

Ingestion of the same salt can weaken the muscles and accumulate to form kidney stones. Besides kidneys, the liver is also damaged to a great extent. Kidney stones can become fatal within a few days, and the dog might be risking his life.

An ice melt having urea-based compounds can adversely affect the dog’s kidneys. Because urea is a product of metabolism, its excessive rise in blood plasma can be toxic. Therefore it must be removed from the body as soon as possible. If the dog directly ingests urea or urea-based compounds, it can rapidly cause fatality with the initial signs of severe abdominal pain, tremors, muscle weakness, respiratory discomfort, and recumbency. This condition is called Non-protein nitrogen (NPN) poisoning or NPN toxicosis.

What if Dogs Eat Too Much Snow?

Many dog owners take their dogs out in winter weather. They let the leash loose, and it results in allowing dogs to eat snow to their fill. Too much snow can decrease the dog’s body temperature to a dangerous level. The cold temperature outside, along with too much consumption of snow, can put the dog at the risk of hypothermia. It can damage his brain, heart, and respiratory system. From newborn babies to adult dogs, all are equally at risk to it. Hence, as soon as you feel that the dog ate snow in large amounts, immediately take him to a vet.

How to Keep a Dog Away From the Snow?

Don’t let your dog wander freely in the snow, especially if there’s an ice melt. Hold his leash tightly and keep an eye on him while you are out with your furry friend. Give your dog a lot of water to drink so that he will not be thirsty anymore to eat snow. The main hazard of the snow is the ice melts getting on their paws. You can prevent them from inhaling or ingesting these by covering their paws either through boots or coating their paws with Vaseline or any paw balm. Then, when you come home, wash his paws thoroughly.

Pet parents can allow dogs to eat fresh snow in small amounts only. They eat snow out of their innate instinct or when they are thirsty. Consuming snow in large amounts can damage the dog’s stomach and pose several other health hazards. In cold weather, a rock salt or ice melt is often used to melt snow and clear the path for traffic. These ice melts have chemicals in them that are extremely dangerous for their health.