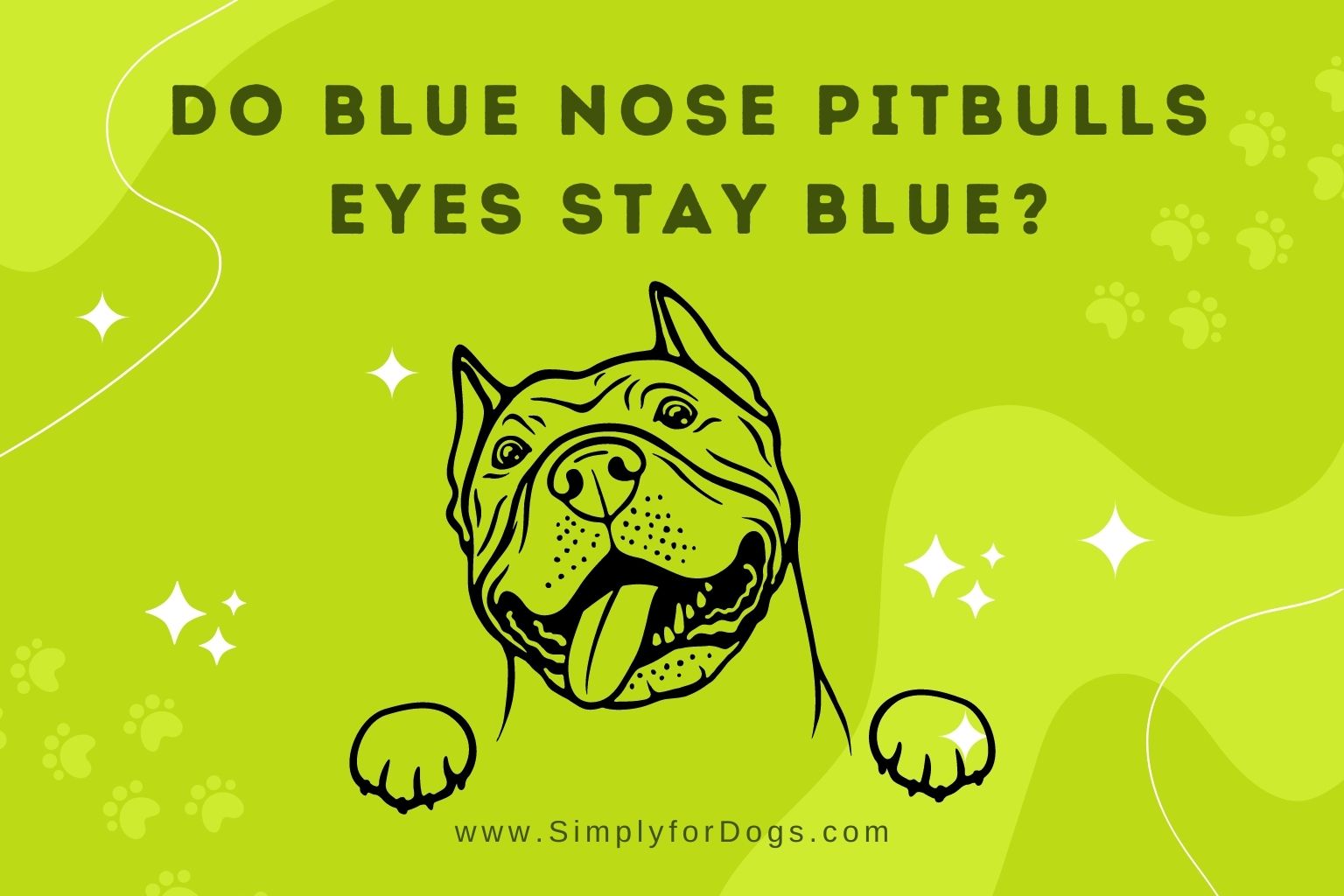 Many pitbull puppies have blue eyes starting around four months old. Over time, however, their eyes will begin to change color since most do not stay blue.

The rest of this article will explain why the blue nose pitbull puppy has blue eyes and how long you can expect it to last.

The pitbull is not a breed itself but a term that encompasses several different dog breeds, such as the Staffordshire bull terrier, American pit bull terrier, and more.

Most of these pit bulls will have blue eyes as puppies as the eye pigment melanin hasn’t developed, but usually, they will slowly darken with age. Most pit bull owners will see their eyes darken once they are not puppies anymore.

Why Do Blue Eyes Disappear?

The bright blue eyes of a pit bull are determined by genetic makeup and development. This is determined by the amount of melanin the dog produces.

Melanin is the skin pigment in the body that determines how light or dark someone’s eyes, skin, and hair are. For example, if less melanin is produced, eyes will be a light blue color.

A lack of pigmentation, or lack of melanin altogether, is considered to be albinism and can be seen in some albino dogs.

If a dog has a low melanin production, it will likely have a white or light coat with blue eyes, accompanied by a pink nose.

The production of this pigment starts after birth and increases with age. This is why many pitbull puppies are born with bright blue eyes and light coat color.

How Long do their Eyes Stay Blue?

Blue-eyed Pitbulls will begin to change around four months. Around this time, you will likely see your pitbull develop dark brown eyes.

This will most likely be followed by the replacement of a darker, thicker coat around six months old.

Blue-eyed pit bulls are not rare, and their eye color will change over time. Some breeders often try to sell them as rare, but their color will most likely vanish over time.

It’s essential for future pit bull owners to understand that they should not choose puppies with blue eyes, for that quality in itself, as they will disappear.

Most of the time, what makes blue-eyed pit bulls rare is the fact that they have been irresponsibly bred with different genes. It is very rare that pitbull eyes stay blue.

Some breeders have bred pit bulls for a specific coat or eye color. This should always be seen as a red flag since many of those breeders will not take temperament and health into account.

Many of these breeders will also practice inbreeding. This is a big issue and will pass on different health issues for generations.

When discussing blue-eyed pitbull, we should discuss the negative health issues that come with some irresponsible breeding practices, so that future pit bull owners understand that getting a pitbull with blue eyes can be a detriment to the dog.

Melanin is controlled by the enzyme Tyrosinase. A dog who is albino, or has a light coat and blue eyes, is considered ‘tyrosinase-negative.’ This means that their body cannot produce melanin.

Unfortunately, these dogs have many health issues, including deafness and even skin cancer. So if a breeder is trying to sell you a white dog with blue eyes, you should be careful.

Additionally, many of these dogs must be protected from direct sunlight at all times and must be given sunscreen or bodysuits to protect their sensitive skin.

A merle pit bull is one with a beautiful coat pattern. It can also create odd-colored eyes. Unfortunately, this specific gene can also come with deafness and blindness.

Double Merles are very prone to genetic diseases. Therefore, Merle pit bulls are excluded from the APBT breed standard. In fact, they may not be purebred at all since the gene had to have found its way into the bloodline.

This gene that causes the merle pattern is found in many dog breeds, such as the Great Dane, Dachshund, and Australian shepherd.

This means that your dog may have trouble producing pigment, which can be spread to the face. This can occur in just one eye or both. If a dog has this, it will likely have blue eyes.

Some pit bulls, though rare, can also possess the blue eye gene, known as ALX4. This is extremely rare in all dogs, though some breeds, such as the Siberian husky, can more commonly possess it.

Additionally, other breeds such as corgis have a recessive gene for blue eyes.

Genes in some blue-eyed dogs can cause several health issues. Let’s go over a couple of the biggest ones.

According to several studies, including one done by Washington State University, many dogs with blue eyes have been linked to hearing impairment.

Among those breeds, pit bulls are predisposed to congenital deafness.

While not all white or merle-coated blue nose pit bulls will be deaf, they have been known to have a higher chance of developing complete or partial deafness.

Two genes can cause this- the merle gene and the piebald gene. Deafness has been found to be present in many dogs that are carriers for these two in particular.

That being said, if a pit bull has blue eyes due to the merle gene or has a spotted or white coat due to the piebald gene, they can develop hearing loss over time.

A pit bull with blue eyes can develop vision defects due to the merle gene. This does not mean that all pit bulls with blue eyes will go blind, but it does mean that it is likely to occur, especially if both parents of these dogs have the gene.

Blue-eyed dogs have also been known to have hereditary cataracts, Persistent hyperplastic primary vitreous, or PHPV, and Distichiasis.

Can A Pitbull with Blue Eyes go Blind?

Pitbulls with blue eyes are not destined to go blind, but there is a significant possibility that they do so since most of the ways pitbull eyes stay blue are due to genetic issues.

This is why many responsible owners and breeders will say to stay away from albino and merle pit bulls.

If a breeder has puppies with baby blue eyes, you should know that they will most likely change in only a few short months.

What Color Eyes do Blue Nose Pitbulls Have?

The American Pit bull terrier is considered to be one of the only purebred dogs with naturally green eyes. Although many of these dogs will develop dark brown eyes as they age, a pit bull puppy will likely have blue eyes, and adult pit bulls can possibly have blue or green eyes or even brown or green eyes.

Brown eyes are the most common color you will see for blue pit bulls.

How to Tell if a Pit Bull Puppy is Full Blooded Pit Bull?

When looking at a puppy, you will see that it is muscular, with a very athletic build.

The blue-eyed pit bull puppy you see at a breeder will often grow into brown-eyed dogs.

How Much are Blue Pitbulls Worth?

Pitbull puppies with piercing blue eyes will be more expensive than puppies with a different eye color. Although this is almost always true, there will be several other variables taken into account by breeders when setting prices.

First, they are going to figure out the purity of the bloodline. This will change the price of the puppy significantly.

If a future pit bull owner is set on having an adult pitbull with blue eyes, they should ask a breeder to hold onto Pitbulls until around nine to twelve weeks, when their eye color should be the permanent color.

Can Pitbulls Have One Blue Eye?

If a pitbull has one blue eye, it was likely caused by heterochromia. This is the lack of the pigment melanin in one part or all of the eye. If a dog has this, it can cause their eye to appear blue or blue-white. This can be passed down through genetics.

It’s important to understand that although this is rare and desired by some, many genes come with adverse health issues caused by it.

Are These Dogs Undesirable?

Some people may think that the pit bull with different genes is undesirable because they are not purebred. That being said, although they are perfectly fine, they are not without issues.

Although merle pit bulls are beautiful, they are caused by a natural gene for pit bulls. This means that it was introduced to them, and many can have different issues stemming directly from that gene itself, such as blindness.

These will be dogs with a solid, strong-colored coat with blue eyes. The coat shows that they have good pigment and melanin levels, which would mean that they do not have the merle gene and they do not possess a melanin deficiency.

These dogs will cost a lot, but they are healthier than the dogs bred to have blue eyes.

The temperament and personality of the American pit bull terrier are so essential to understand.

Despite the negative stereotypes that come with the breed, the American Temperament test society has declared this breed one of the best companions since they have such high temperament scores. In fact, according to the ATTS, they have a rating of 86.4%, which is higher than the golden retriever and beagle.

While the pit bull is amazing with kids and adults, the vice president of the ASPCA’s Animal Behavior Center in New York, Pamela Reid, has said that they are less tolerant of other dogs.

Needless to say, pit bulls are always eager and full of enthusiasm and energy. They are lovely for families and are generally absolutely amazing with small children.

Negatively, some pit bulls have been found to be tenacious, fearless, and stubborn, which can sometimes make training them a hassle.

Should You Adopt a Pitbull with Blue Eyes?

This answer is entirely up to you. As long as future pit bull owners understand that the puppy’s eye color will more than likely change with time, adopting a puppy with blue eyes is excellent!

Dogs born with blue eyes, who keep the color throughout their adulthood, are rare, and owners should understand the health risks related to it before adopting, as it will likely cost more money and will require more energy over time.

Most blue nose pitbull puppies’ eyes will not stay blue past four to five months old.

Blue-eyed pitbull puppies are absolutely adorable, but they likely will not keep their eye color for long. If they do, it usually means that they either have a specific gene that can cause other health issues, or they possibly are just… rare!

Unfortunately, a naturally occurring blue-eyed pitbull will come with a hefty price, as they are scarce.

When choosing a pit bull puppy, you should not choose based on eye color, as it will more than likely change.