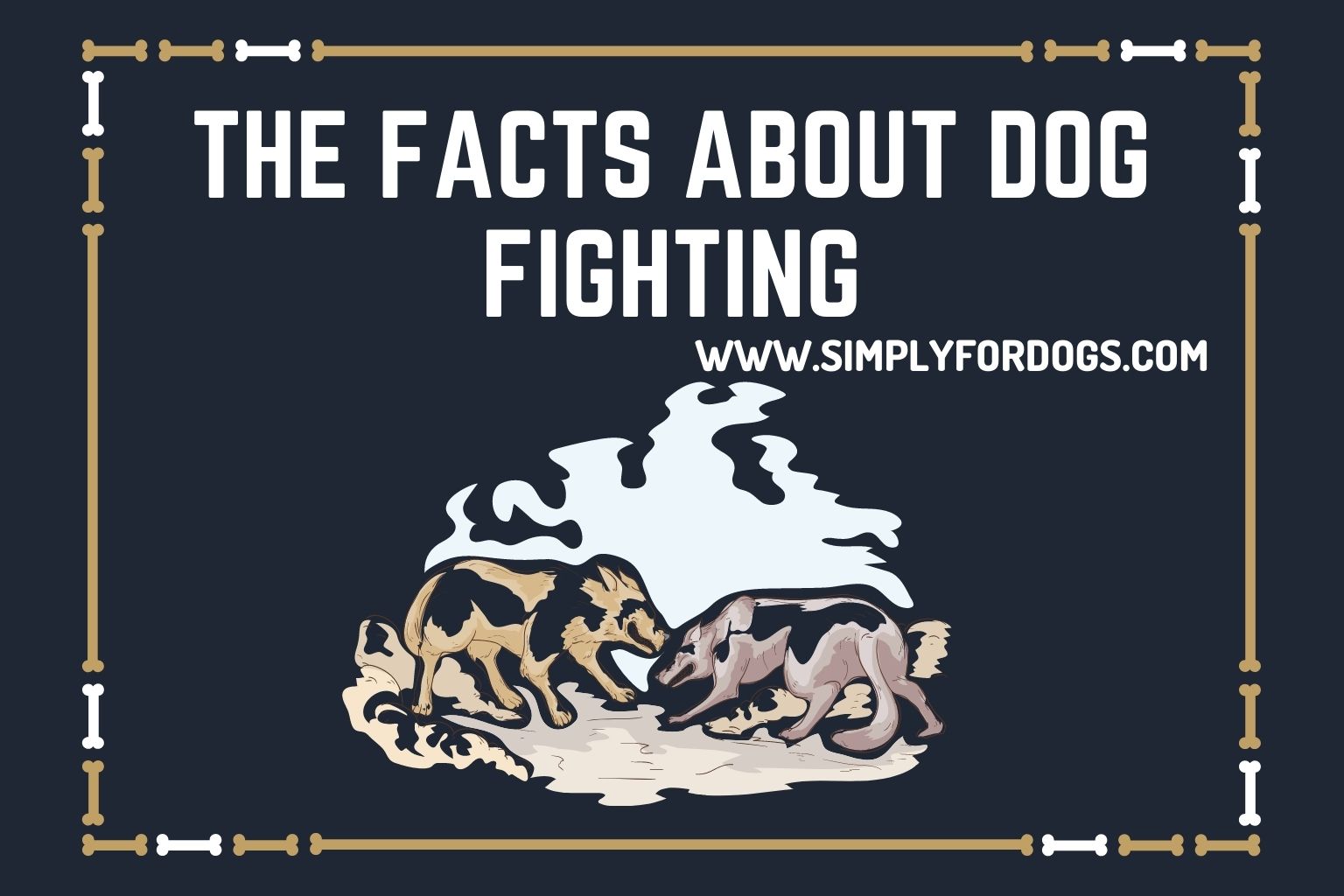 Dogs are known for being loyal and friendly companions, but unfortunately, they can also engage in fights with other dogs. If you’re a pet owner, it’s important to be aware of the facts about dogfighting so you can keep your pup safe.

In this blog post, we’ll discuss dog fighting, how to spot signs of a Dog battle, and what to do if your dog gets into a fight. Keep reading for more information!

What Is Dog Fighting: and How Does It Work?

Dog fighting is a blood sport where two dogs, usually pit bulls, are placed in a ring and encouraged to fight each other until one is killed or submits. The dogs are typically bred and trained for the sole purpose of dog fighting, and they can suffer serious injuries, including fractured bones and ripped flesh.

What Are the Different Types of Dog Fighting That Occur?

Organized dog fights are typically held in a secret location and involve several dogs that have been specifically bred for fighting. These fights are often very brutal, and the loser can often die due to their injuries.

Street fights are usually less organized and often involve two dogs that have gotten into a fight without any provocation. These types of fights can occur anywhere, but they are most commonly seen in inner-city areas.

Baiting is a type of dog fighting that involves using another animal as bait to train dogs to fight. This practice is often illegal, as it is considered to be animal barbarism.

How Common Is Dog Fighting, and Who Participates in It?

Some of the people who are most commonly associated with dogfighting include:

If you suspect that someone you know is involved in dog fighting, it’s important to report it to the authorities. Dog fighting is a cruel and illegal activity, and those who participate in it should be punished accordingly.

What Injuries Can Dogs Suffer During a Dog Fight, and How Serious Are They Typically?

Dogs can suffer various injuries during a dog fight, from minor cuts and bruises to more severe injuries such as broken bones or puncture wounds. Unfortunately, injuries can also be severe and even fatal.

Dog fighting is illegal in many countries, and there are animal welfare organizations that work to rescue dogs from these situations and find them new homes.

Suppose you’re concerned about dog fighting in your area or suspect someone may be involved in dogfighting activity. In that case, you can report it to the police or your local animal welfare organization or humane society.

If you have a dog that you think maybe suitable for dog fighting, please seek professional help to assess whether or not this is the right option for your dog. Remember, dog fighting is illegal, and there are much better ways to provide exercise and stimulation for your dog.

What Is the Distinction Between a Pitbull and an American Pitbull Terrier? What Are the Purposes for Which Pitbulls Are Used in Fights?

Many people are unaware of the difference between a pit bull and an American pit bull terrier. As a result, the two breeds are often mistaken for one another, but there are critical differences between the two.

The American Pitbull Terrier is a breed that was created in the United States in the early 19th century. They were bred from Old English terriers and bulldogs for dog fighting.

On the other hand, pit bulls are a type of dog that includes several breeds originally bred for bull-baiting. These dogs include the American Staffordshire terrier, Staffordshire bull terrier, and American bully.

While both types of dogs were initially bred for fighting, American pit bull terriers are the only breed still explicitly bred for dog fighting. This is one of the main reasons why pitbull are often associated with dog fighting.

Are There Any Laws Against Dog Fighting in the United States? If So, What Are They?

All the countries have made dog fighting illegal. Dog fighting is considered animal barbarism and is punishable by law.

Why Do Dog Fighters Abuse Their Dogs, and How to Stop Them From Doing It?

Dog fighting is a savage and brutal activity that often causes severe injury or death to the animals involved. Despite being illegal in many countries, it continues to occur worldwide, with millions of dogs subjected to this horrific abuse every year.

So why do people engage in dog battles or animal abuse? The answer is complex but often includes power, money, and machismo issues. In some cases, dog fighting may also be seen as a way to keep certain breeds of dogs “pure” by only allowing the strongest and most aggressive animals to breed.

Whatever its reasons, dog battle is a cruel practice that needs to be stopped. There are many ways to get involved in the fight against dog fighting, such as supporting legislation that aims to crack down on this abuse or donating to organizations that rescue and rehabilitate dogs forced to fight.

If you suspect that a dog battle is taking place in your community, please report it to the local law enforcement agency so that these animals can be saved and the perpetrators brought to justice. Together, we can put an end to this cruelty.

How to Stop Dogfighting in Your Area?

Dogs fighting is a brutal and inhumane activity that often leaves animals with severe injuries, including puncture wounds, lacerations, and broken bones. In some cases, dogs can even be killed due to this pastime.

While dogfighting is illegal in most countries, it unfortunately still occurs all too often. In addition to the physical harm that these dogs suffer, dogfighting also has a number of negative consequences for communities.

For example, dogfights often occur in low-income neighborhoods and can lead to increased violence in these areas.

If you suspect that dogfighting is taking place in your community, you can do a few things to help put an end to this cruel practice.

●       First, report any suspicious activity to the police or your local animal control agency.

●       Second, spread the word about the facts of dogfighting to educate your neighbors and help build support for stricter penalties against this crime.

●       Finally, donate time or money to organizations working to combat dogfighting, such as the Humane Society of the United States or the American Society for the Prevention of Cruelty to Animals.

With your help, we can end this inhumane practice once and for all.

Some Facts About Dog Fighting

●       Dog combat fighting is a form of animal inhumanity that occurs when two dogs are forced to fight each other for sport.

●       The dogs are often bred and trained to be aggressive, and they can suffer serious injuries or even death during these fights.

●       Dog fighting is illegal in most countries, and those caught participating in this activity can be subject to severe penalties and up to tens of thousands.

●       Despite the fact that dog battle is illegal, it still occurs in some parts of the world. This cruel practice must be stopped to prevent these innocent animals from being subjected to such violence.

●       If you witness dog combat or have any information about this crime, please report it to law enforcement so that the perpetrators can be brought to justice. Together, we can put an end to this cruelty.

The facts about dogs fighting are clear: this is a cruel and illegal practice that needs to be stopped.

What Is Illegal Gambling in a Dogfight?

Dog fighting is gambling, where people place bets on which dog will win a fight. This is a criminal activity in most countries and can lead to hefty fines and even prison time. In some cases, dog fighters will also be charged with animal cruelty.

What Are the Reasons Why Pit Bulls Are Utilized in Dog Fights?

There are many reasons why pit bulls are utilized in dog fights. Some people may choose this type of dog because it is considered a tough fighter. Others may use pit bulls for dog fighting because they are less likely to back down when challenged. Pit bulls are also often used in this activity because they are strong and have a lot of stamina, making for a longer and more brutal fight.

Why Are Dogs Chained Up?

Dogs that are chained up all the time can become aggressive. They may feel trapped and become frustrated, which can lead to aggression. Chained dogs may also bark excessively and become defensive when someone comes near them.

What to Do if You Suspect Dog Fighting or Animal Fighting?

If you suspect dogfighting or animal fighting, the best thing to do is contact your law enforcement officials. Dogfighting and animal fighting are illegal in all 50 states, and those caught engaging in these activities can face significant penalties.

My Experience With a Boxer vs. Pitbull Dog Fight
15 Strategies for Avoiding Dog Park Fights
5 Ways of Dealing with Aggression When You Have More Than One Dog

Dog combat fighting is a terrible and cruel act that should be stopped. If you see any signs of a dog battle, please report it to the authorities. Together, we can put an end to this barbaric blood sport.