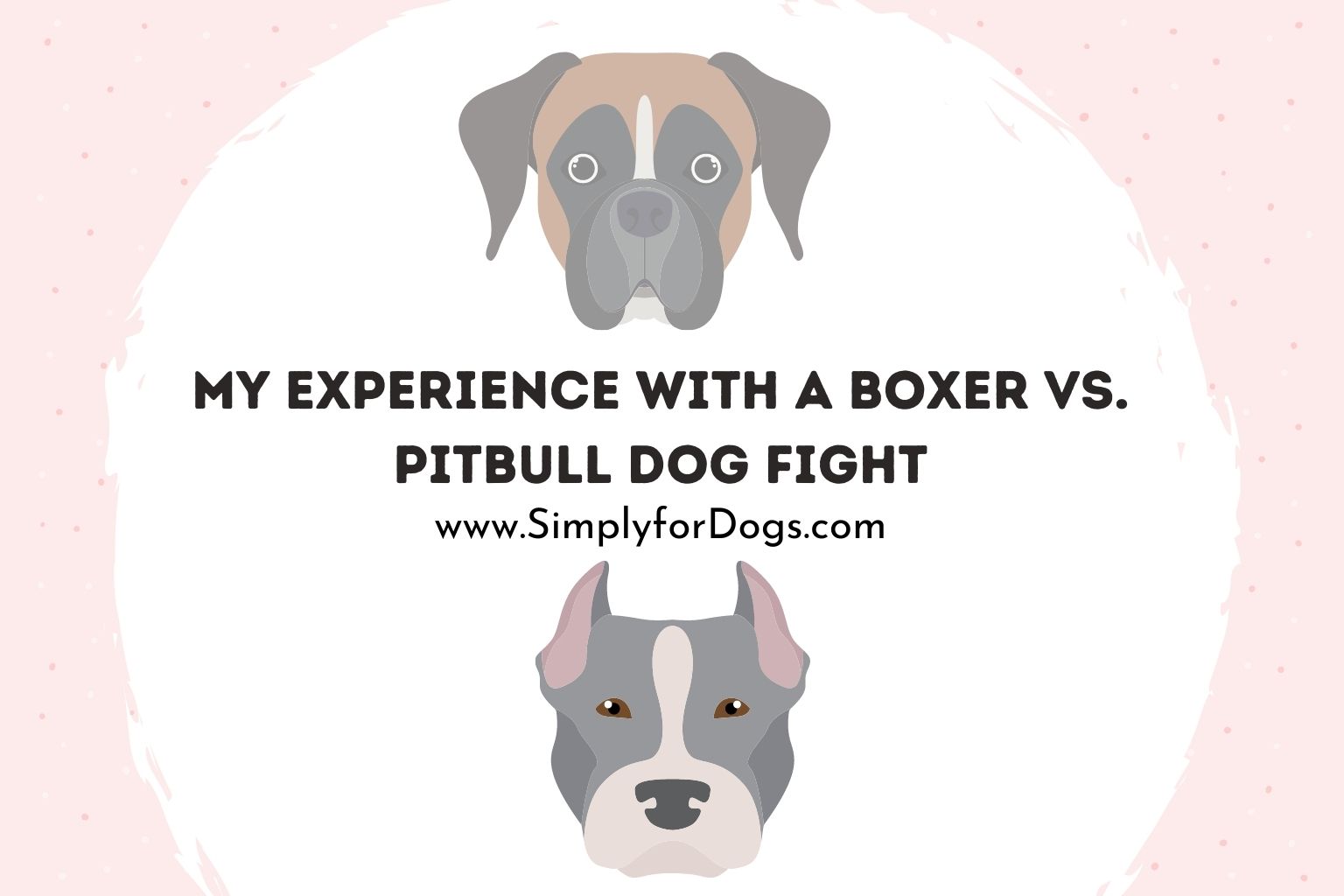 Well, it has finally happened. I’ve talked about breaking up dog fights in How to Break Up a Dog Fight, but I’ve never actually had to do it, until yesterday. I was walking Janice and Leroy through the neighborhood (on leash), and along came a neighbor, walking a dog off leash. I’m not really blaming her – I think she probably made the assumption, as I do with my guys, that most dogs are good and not likely to want to be confrontational. Her dog thought otherwise, though, and the two of us ended up being participants in a Boxer vs. Pitbull dog fight.

Well, Janice took exception to something that other dog was saying to her. Or vice versa. They started mixing it up, and then Leroy jumped in. Then I ended up dropping the leashes and jumping into the fray, totally forgetting everything I ever said in How to Break Up a Dog Fight, because Janice was getting hurt. Leroy was kind of in and out, because he’s basically a lover, not a fighter, and he was really being more disruptive than anything, but still being snapped at by the other two involved.

The other human in the mix had no idea how to break up a Boxer vs. Pitbull dog fight. I kept shouting at her, “Grab her by the hind legs; that way she can’t bite you.” It’s always best if a dog fight is broken up by two people, but that wasn’t going to happen in this case. Mostly, the other human was throwing up her hands in panic, and screaming “Tiffany, no!”

Tiffany was, of course, not listening.

Have You Ever Seen a Dog Fight?

It’s not pretty by a long shot.  You’re dealing with dogs grabbing one another by the throat, tossing one another around and generally trying to kill one another. So, knowing that this could end in a fatality, I did what I felt I had to do. Grabbed Janice by her collar and tried to drag her off the Pitty. The Pitbull was having none of that, and holding onto Janice’s throat. Then finally, the Pitty person got her act together, jumped in and tried to drag her dog off Janice. I think most of what we were achieving was simply minimizing damage – they were still trying to tear one another’s throats out. 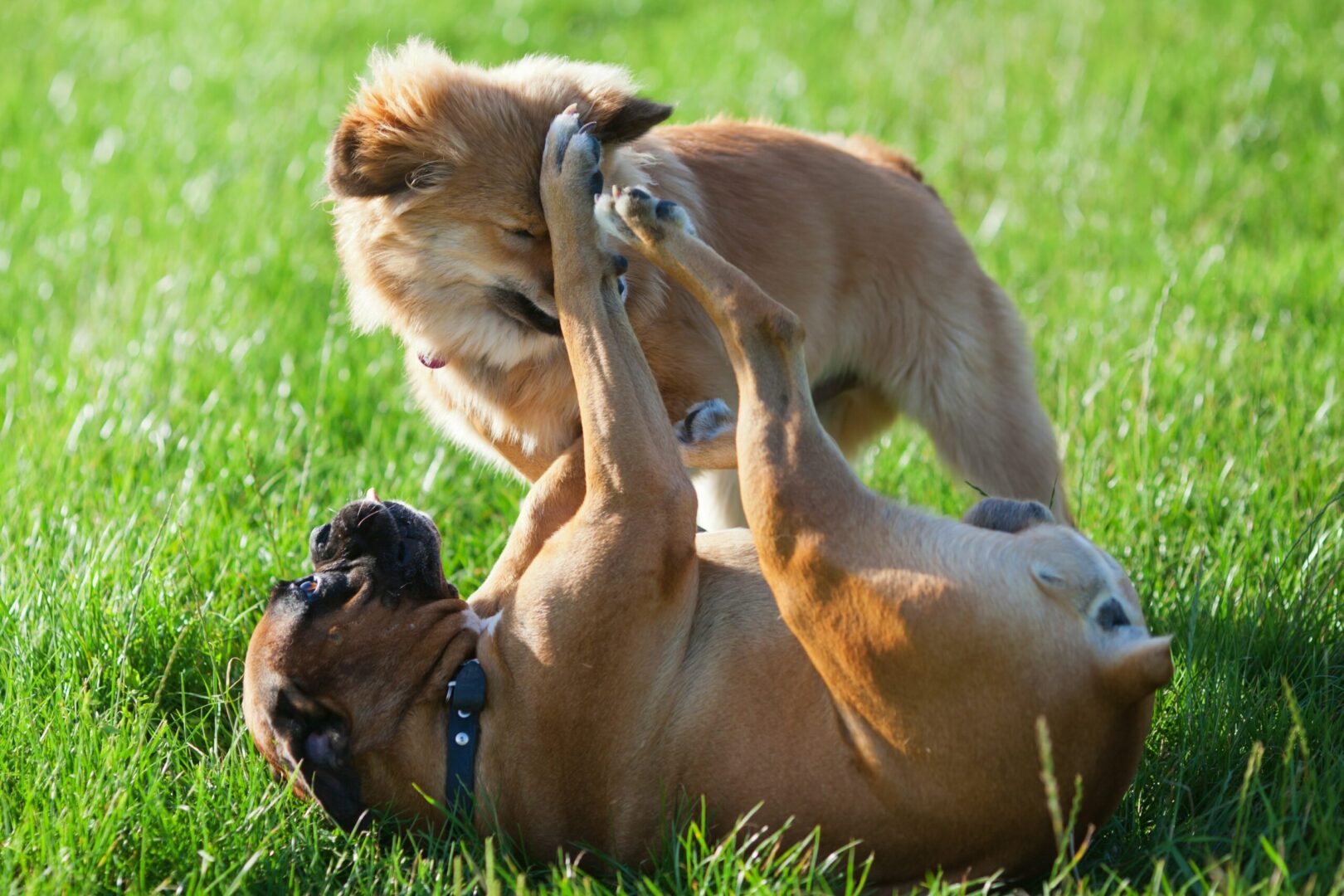 Part of the trouble was that we were out in the open, with nowhere to take our dogs once we actually got them under control. The other problem was that there were three dogs involved. Usually, if it’s just two, you can drag one dog or the other to a location where he can be confined, and if there is no such location, at least hold him or her under control until the other person and their dog can find an avenue of escape. With three, and no “safe place,” a fight can be very, very difficult to break up.

The thing is, I’ve always said that I would take a bullet for either of my dogs. Meaning, I suppose, that I would die for them, as I know they would for me.

This isn’t World Wrestling Entertainment, so you really don’t need a play-by-play. I doubt that I could even offer one, since everything happened so fast. It’s all kind of blur in my mind anyway. I remember lying on the ground and throwing my whole weight onto Janice’s collar, and I remember feeling the bites and telling myself, “Ash, just don’t let go.” Whether those bites were from Janice or Tiffany, I have no way of knowing.

The upshot was that I ended up with puncture wounds and claw slashes to my arms, and Tiffany’s person ended up pretty much the same. We commiserated in the emergency room at the hospital while we got stitched up. At least neither of us needed to have anything re-attached. Janice and Tiffany also came out of it reasonably well, with neither requiring a trip to the vet due to the Boxer vs. Pitbull Smackdown, which was conducted with no help whatsoever from Vince McMahon.

Why Does This Happen?

Most of the time, it’s territorial. I think that what happened here is that I inadvertently walked into the Pitty’s territory and she reacted. Sometimes, too, it can be that you have two dogs that are reproductively intact, and of the same sex, and their instinct is simply to fight to the death.

Can you stop it? Maybe not, unless you just stay out of their territory. In my situation, I did not know that I was in Tiffany’s territory. So, how can you prevent Boxer vs. Pitbull interactions, and other dog fights?

One of the best ways to prevent dog fights is to spay or neuter. You and I might not much care if we get to breed, but dogs do care. They will fight hard over breeding rights, and there is very little that you can do to stop them from fighting. So spay and neuter, and that might go a long way to stop fighting over breeding rights.

Breaking Up a Dog Fight

It isn’t easy breaking up a dog fight. In fact, if you try to do it, chances are that you will end up being hurt. If you absolutely have to do it, though, make every effort not to do it on your own – it’s a two-person job. You have to grab one dog by the hind legs – that’s because he won’t be able to turn around and bite you, as I pointed out to Tiffany’s mom – and have someone else grab the other dog by its hind legs, for the same reason. Then, pull them apart and segregate them.

My situation was a little more complex than most dog fights. There were three in the mix, and no safe places. The Boxer vs. Pitbull match was on, and no one to handle the second Boxer, who kept circling the fray. Usually, you won’t have to deal with this sort of thing.

Be Prepared to Be Bitten

I knew I was running a very serious risk, but Janice was in very real danger. She could have been killed. I fully understand if you choose to stand back and let the chips fall where they may, because the reality is that in a serious dog fight, it might not just be a dog that ends up being killed, especially if large dogs are involved. Your dog will not mean to bite you, but you have no way of knowing what the other dog has in mind. And if the jaws of either dog happen to clamp, accidentally or otherwise, on your femoral artery or your throat, it could be game over for you.

I took the chance. Maybe that makes me an idiot. Of course Tiffany’s person finally waded in too, so I guess I was in good company, idiotically speaking.

You have two choices if you decide to try to break up a dog fight – either stay in it or bail. If you’re smart, you will probably bail. If you’re a moron like me, you will stay in the fray, hold on to your dog’s legs, and pray for the best.

I am absolutely not recommending that you do what I did. Sometimes I can be pretty stupid. I stayed in there, and I got bitten in a huge way. I really do not recommend it. But if you’re going to be a moron like I was, stand your ground and do not ever let go. Your dog’s life could depend on it.

The Better Course of Action

Some will tell you that if a dog fight happens, then you just have to let it go, wait it out, and accept the consequences, because no dog can be trained to be “called off.” This is not true. Dogs most definitely can be trained to “get off” but it will take a lot of effort. Honestly, I’ve never attempted this kind of training with Janice and Leroy, mostly because I didn’t think I had to. The episode with the Pitty has me re-thinking things. In fact, I’ve been doing a lot of vigorous Googling, trying to learn more about dogs that are aggressive toward other dogs, and how to deal with that aggression.

First of all, never make assumptions when it comes to your dogs. The best dog in the world can “go off” and attack another dog. And you can end up in the middle, as I did. Right now I have injuries to deal with. You could too, if you’re not careful. Second, expose your dog to lots of other dogs when he is very young. Third, teach him avoidance techniques – these won’t help overly much if another dog is hell-bent on attacking your dog, but they can work to defuse many situations. Fourth, stay calm if you end up in a bad situation. If you panic, the dogs may pick up on that and matters will become much worse. And finally, never assume that it’s only Boxer vs. Pitbull or other large breeds that can get you hurt – you can end up with injuries trying to break up a fight between (or among) small dogs, too.

In a dog fight, no one ever wins. With the Boxer vs. Pitbull match, Janice ended up with minor puncture wounds. Tiffany earned a torn ear. Tiffany’s mom needed nine stitches in the palm of her hand, and I required eleven in my right forearm. I’m also sore in every muscle of my body right now from pulling and pulling, trying to get Janice away from Tiffany.

In a perfect world, everyone who owns a dog with aggression issues would have him or her muzzled when out in public. Sometimes, though, you don’t know that there are issues until your dog ends up in a fight. And if your dog is muzzled, and the aggressive dog isn’t, your dog has no means of defense.

You may never be able to completely avoid the chance of a Boxer vs. Pitbull conflict, or conflict between or among other breeds. If it does happen, though, make a decision as to what you will do. I value my dogs’ lives as much as I do my own, and that’s why I’m in pain today. You don’t have to make the same decision, but if you do, know what you’re getting into.