This week, a couple of my posts have been the direct result of questions that I was asked at the dog park, and both were asked by my friend Debbie. Now, Debbie and I are friends outside the dog park as well, and I’m quite fond of her and enjoy her company, but to state it bluntly, she can be a bit of a ditz.

Debbie knows that I see her this way, and takes it in stride. In fact, when I say to her, “You know, Debbie, sometimes you can be a bit of a ditz,” she just laughs and says “I love you too, Ash.”

One of Debbie’s questions, I answered in 11 Reasons for Chattering Teeth in Dogs. I didn’t call her a ditz because of that one, because if dogs are chattering their teeth, it’s perfectly reasonable to wonder why they are doing so. What had me shaking my head in disbelief and amusement was this: “Ash, how come Chuck’s feet smell like popocorn?”

Feet smell like popcorn. I couldn’t believe what I was hearing! Once I stopped laughing a lung up, I started to say, “Debbie, you are such a—“

She interrupted me. “No, Ash, really! Popcorn toes!” Then she lifted Chuck off the ground, which is a feat that’s somewhat easier these days since his diet is working (see Step Away From the Dish, Doggie, You are Way Too Fat!) and she shoved his toes in my face. His dirty little toes that had been all over the dog park. Honestly, sometimes Debbie is such a— well, you know.

I took a sniff (like I had a choice!) and I couldn’t believe what I was smelling – Chuck’s feet really did smell like popcorn. Or something similar, at any rate.

Now, Debbie isn’t the type to do her own research. So in that way, she’s actually pretty crafty. She doesn’t have to go home and Google things like “my dog smells like popcorn,” or “why do feet smell like popcorn,” or yes, “popcorn toes,” because she knows perfectly well that if she asks me a question about dogs, I’ll either have an answer for her, or I won’t. And if I don’t, my curiosity will lead me to do what she doesn’t do – I’ll be the one at home, hunched over the keyboard, Googling “popcorn toes.” Which is exactly what I did, after I did the obvious. 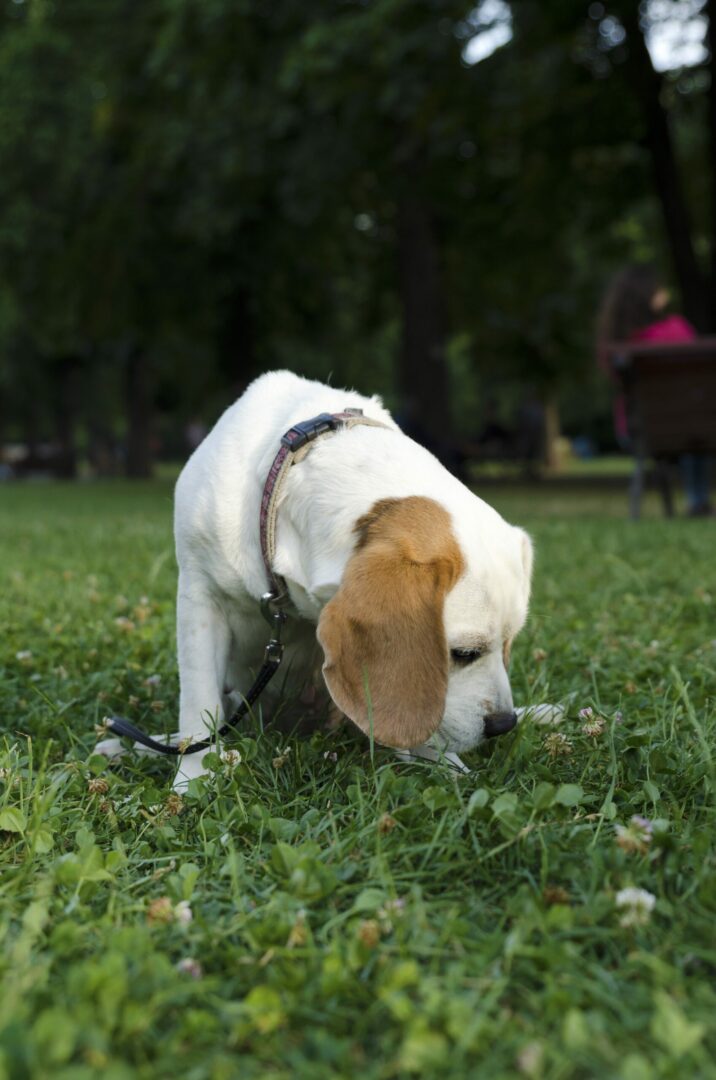 The obvious, of course, was to smell my own dogs’ feet. Leroy thought that the idea of my settling him on the couch next to me and raising his feet to my nose was a wonderful game. Janice, I believe, thought I had gone completely nuts, and seemed rather uncomfortable. I can verify, though, that out of eight sets of toes, none smelled like popcorn. Mud, mostly, I think, and perhaps something else that I’d rather not have had in contact with my nasal passages. Then I started Googling, and I found out the answers to that burning question, “Why do feet smell like popcorn?” As I invariably do, I will share the benefits of my vigorous Googling with my loyal readers.

How Your Puppy Smells, Sees and Hears
7 Odd Things Dogs Eat and What to Do About It (Video)
7 Weird Things Dogs Do With Their Noses

Are Popcorn Toes an Indication of a Problem?

The jury seems to be pretty much out on this. Some veterinarians believe that the odor is due to harmless yeast and bacteria growing on the dog’s toes, and they say that they don’t really know how, or why, it happens, but that regardless of the cause, it’s not something to worry about.

Others believe that popcorn toes are caused by a bacteria that lives in soil and animal feces. It’s called Proteus, and some scientists say that it could lead to antibiotic resistance in dogs. There is also another bacteria, Pseudomonas, that will give off a similar aroma.

So, whether or not you consider popcorn toes to be a problem depends on which source of information you choose to be onside with. Janet Tobiassen Crosby is a veterinarian who works out of Oregon, and she maintains that popcorn toes are not a big deal. After all, feet are the parts of a dog’s body that are most likely to pick up odors, and if they smell like popcorn, it’s likely not anything more than an interesting curiosity.

Other veterinarians, though, believe that the odor could be due to a fungal infection that could lead to irritation in the paws. That might not be the biggest health issue that you will ever face when it comes to your dog, but it will still cause discomfort and should be treated.

What About the Smell?

It seems as though veterinarians can’t even agree on the smell. Is it popcorn toes, or is it corn chip toes? Or is it something else?

Proteus has been described as having a rather comforting aroma, which may be why many people perceive it as smelling like popcorn or other enjoyable snack foods.

Professor Nicola Williams is a veterinary microbiologist working out of the University of Liverpool. She says that she has never smelled popcorn toes on any of her dogs, but she believes that bacterial growth can produce interesting smells. Pseudomonas, for instance, have a strong odor, which she compares to the smell of bubblegum. She admits, though, that human olfactory processes being what they are, some people might perceive it as popcorn. Whatever the cause of the smells, though, she puts popcorn toes down to normal bacterial growth, and believes that popcorn toes are not a cause for concern.

On the other hand, Dr. Williams’s colleague, Dr. Vanessa Schmidt, who specializes in veterinary dermatology, believes that popcorn toes are the product of infections. She also disagrees on the smell, believing it to be more “earthy” than snack-like. She blames the smell on Pseudomonas, not on Proteus, and says that it doesn’t usually affect the feet – it usually ends up in the ears or the folds of the skin. The only way it ends up on the feet, she maintains, is if the dog uses a foot to scratch and in that way transfers the Pseudomonas bacteria to his foot.

Dr. Tim Nuttall is a veterinary dermatologist, and he rejects outright the theory of “popcorn toes.” He maintains that every dog will smell different, and that the idea of popcorn toes comes from our natural tendency to associate unfamiliar smells with something that we do find familiar. Every dog, he says, has a unique smell that results from the number of microbes, as well as the type of microbes, on the dog’s skin, and the ways in which those microbes interact with the dog’s skin oils. The microbes break down oils and fats, and this process causes a smell that is unique to each and every animal. So, you are probably simply recognizing your dog’s own individual smell, and comparing it in your mind to something else.

Dr. Nuttall points out that humans have a sense of smell that is by far inferior to that of a dog. Dogs can identify literally millions of smells, whereas we poor humans perceive considerably fewer. That is why we reach into our memory banks to find something that we can identify, and then compare it to what we are smelling on our dogs.

So, the smell you are perceiving on your dog’s toes could seem to you like popcorn, or corn chips, or bubblegum, or something entirely different. It might be an indication of an infection or a skin condition, or it could mean nothing at all.

About That Wet Dog Smell…

Dr. Nuttall also points out that if you think your dog smells really horrible when he gets wet, that is also a result of the way that bacteria, yeast and skin oils react together.

Let’s face it, even a freshly washed dog doesn’t smell all that good to his human companions. This is because when dogs get wet, the water on the skin releases other compounds, and those compounds find their way directly into your nose. No one seems to mind popcorn toes, but wet dog smell is another thing entirely.

It’s a simple fact that bacteria are going to live on your dog’s skin. Your dog is also going to pick up bacteria and fungi just from walking around. Most of the time, you might notice an odd smell, but it won’t be an indication of health issues. However, in some cases, foot odor can indicate an infection, or the presence of a foreign body in the paws. If this is the case, though, you will probably not enjoy the smell, and you will also notice that it is accompanied by swelling or an abscess. The odor could also be due to an injury in the nail bed.

Check for redness, hair loss, licking, broken toenails or flaky skin on the foot pads. Also look for any lumps on or between the toes, and for limping. If you notice any of these signs, then you should see your veterinarian. Otherwise, you can probably safely assume that any odors emanating from your dog’s paws are normal.

How Your Puppy Smells, Sees and Hears
7 Odd Things Dogs Eat and What to Do About It (Video)
7 Weird Things Dogs Do With Their Noses

Thanks to a bit of research, I was able to satisfy myself, and Debbie, that Chuck’s popcorn toes were not a cause for concern. My biggest concern now is that Leroy is constantly wanting to play the “smell my toes” game, and since he has such gigantic feet, I worry about ending up with a broken nose. Oh, well.

Debbie’s mind is at rest, and that’s a good thing, because I know how much she loves Chuck. So, if you’re worried about the way that your dog’s feet smell, I’d suggest that you not sweat the popcorn toes thing overly much. However, if the odor coming from your dog’s paws is unpleasant, then it is possible that it is not due to the ordinary bacteria that your dog will pick up in any given day. If the paws appear normal, it’s likely all good. But if you notice swelling, cracking, or anything else out of the ordinary, it would probably be a good idea to pay a visit to your vet to rule out infections and other possible health issues.