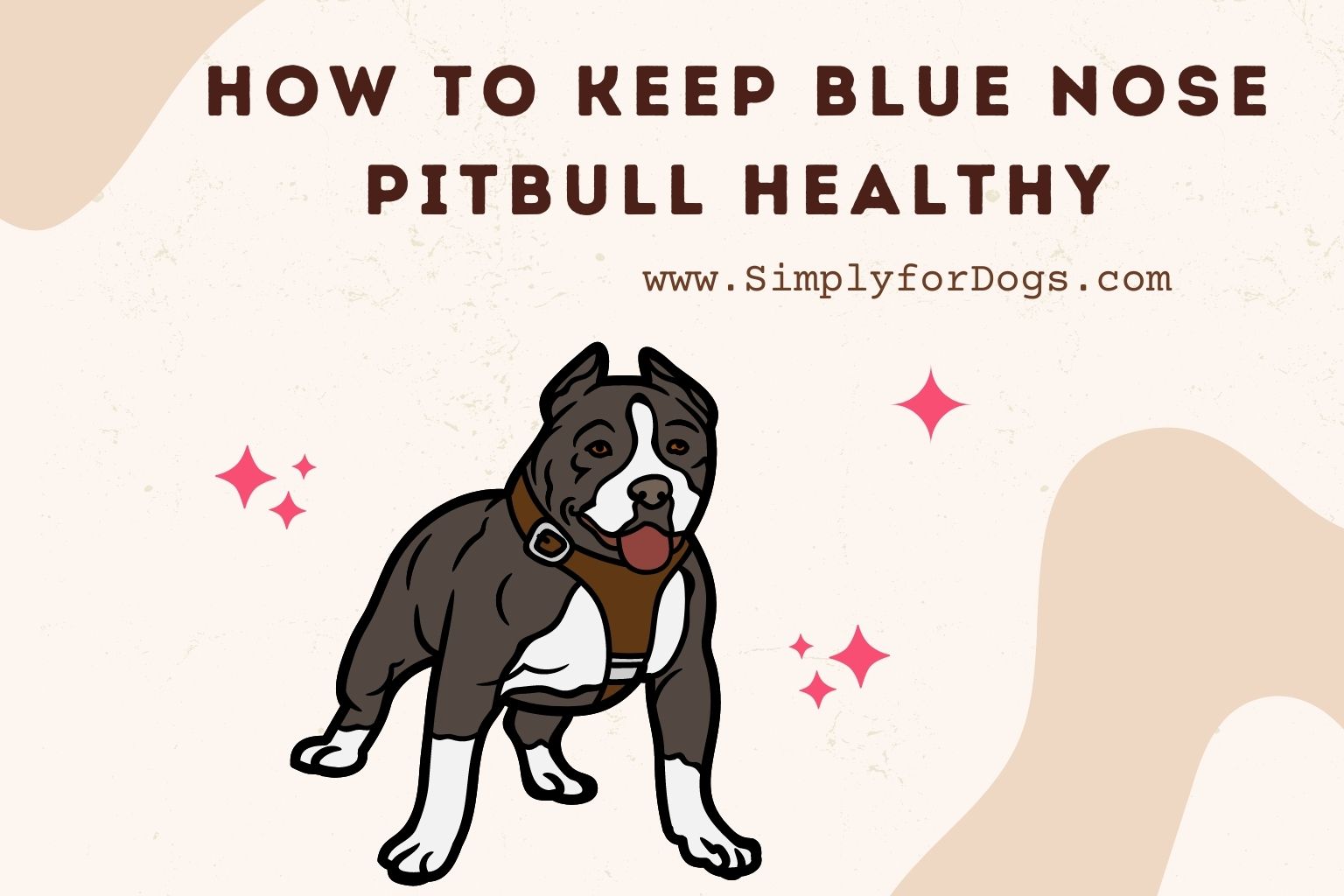 The Blue Nose Pitbull is a very rare breed of dog. So if you’re planning on introducing a Blue Nose Pitbull puppy into your household, it’s important to be fully prepared. Keeping a pit bull healthy does take some work, but it’s well worth the energy put in.

Blue Nose Pit Bulls will require annual check-ups at the vet to remain healthy. It’s also important that you are consistent with feeding them a healthy diet and making sure they get plenty of exercises. Pitbull owners will also need to ensure their dogs receive enough mental stimulation because their mental health is just as important as their physical health.

Today, we’re going to discuss everything a Blue Nose Pit Bull parent should know about keeping their dog healthy. Keep reading, so you know what to do.

What You Need to Know About Blue Nose Pit Bulls

If you want to bring home a Blue Nose Pitbull puppy, then you should know some important facts about the breed. While these dogs can be a lot of fun, they do require more maintenance than other dogs.

You see, Blue Nose Pit Bulls are not a natural breed. According to Pets on Mom, the origins of these dogs are unknown, but it’s believed they are a genetic defect that was caused by interbreeding. This is also why there is no such thing as a purebred Blue Nose Pit Bull either.

Genetic defects do cause this breed of dog to suffer from more health issues. Despite the health concerns, the Blue Nose Pitbull’s lifespan is between 10 and 15 years if they have a healthy life.

According to the Happy Puppy Site, blue genes are very rare in dogs. So in order to give birth to Blue Nose Pitbull puppies, two dogs that both carry the blue gene need to breed. A reputable breeder will know what pit bulls are safe to breed together.

One thing to know about Bluenose Pit Bulls is that it’s not safe to breed them together. Inexperienced Blue Nose Pitbull breeders may see this as a cash-grabbing opportunity. If they were to breed two Blue Nose pit bulls together, they would breed puppies with beautifully colored coats.

However, this is very dangerous. Blue Nose Pit Bulls already have various health issues that pet owners need to worry about. When they are bred together, the Pit Bull puppies have a very high chance of suffering from health problems.

This is also risky because there is a chance of inbreeding when breeders attempt to breed two Blue Nose Pit Bulls. In addition, inbreeding could result in puppies that have shorter lifespans due to health problems. If you want a healthy Blue Nose pitbull, the first step is to get one from a reputable dealer.

How Do You Choose a Good Pitbull Breeder?

When you are contacting breeders for pit bulls, be prepared to ask questions. A qualified and trusted breeder will be prepared to let you know everything you need to about the dogs. They should be able to answer your questions about the dogs who breed and their health records. If the Blue Nose Pit Bull puppy is already born, they may have already had health tests performed and will let you know the results.

If the breeder ensures both the male and female have health checks before mating, then they are likely ones you can trust. A good breeder takes responsible breeding practices seriously because their main focus is breeding healthy dogs.

How To Ensure Blue Nose Pitbulls Have a Healthy Lifestyle

A key to raising a healthy Blue Nose Pitbull is to be consistent with their training and routine from the day you bring them home. If there are certain rules you want to have in place for the dog, you need to start enforcing them from day one.

According to I Heart Dogs, there are 3 rules that owners of Blue Nose Pitbulls should follow to ensure their dog is healthy and happy:

Let’s take a closer look at how each of these rules can help Blue Noses live a long and healthy life.

Rule #1: Spend Time With Your Dog

A Pit Bull regularly needs to be around people to be happy. This is important for the dog’s mental health and happiness. You won’t have to be beside your Blue Nose Pitbull every hour of the day to ensure it is healthy, but you will need to make sure it is getting an adequate amount of attention each day.

A healthy diet and regular exercise are crucial for your Blue Nose Pit Bull to be healthy. Always seek advice from a veterinarian about the best food to feed your Blue Nose Pitbull. Many Blue Noses have food allergies, which is why you need to be cautious about what you are feeding them.

Make sure you are feeding them the suggested serving size. If you overfeed your Blue Nose Pit Bull, they can become overweight. The ideal weight range for adult Blue Nose Pitbulls is between 40 and 80 lbs. Keep in mind that a male will be at the higher end of the weight range while a female should be lower.

Overweight Blue Noses are at a higher risk of dog health problems, including:

Proper care of these dogs also includes a fulfilling exercise routine. Not only do you want to help your dog keep its body lean, but it’s also important to make sure your pooch’s joints remain active.

Bluenose Pitbull puppies need consistent training from day one. Most dogs need good training, but Pitbulls need more than other breeds. There is already a lot of negative stereotypes surrounding Pitbulls. Many people view the Pit Bull breed as violent dogs. However, Blue Nose puppies can grow into well-behaved dogs with the right training.

Good training also provides the Blue Nose Pit Bull with mental stimulation. This is very important to limit behavior issues and can also help you with rule #1. When you are training your Blue Nose Pitbull dog, you are spending more one-on-one time with them.

A well-trained Blue Nose Pitbull dog can also go to more places. Unfortunately, many Pit Bull owners avoid dog parks and other public places because they are worried about their dog’s behavior. However, any Blue Nose Pitbull can be a well-behaved dog breed with thorough training or even puppy classes.

How Important are Vet Visits For Blue Nose Pitbulls?

Compared to other dog breeds, Blue Nose Pitbulls have more allergies. It is very common for this breed to have skin allergies. They have more skin problems and diseases than other Pitbull breeds. Some of these include:

It’s likely you’re attracted to the Blue Nose pitbull dog because of its rare and stunning blue coat and blue eyes. Unfortunately, this is caused by a genetic mutation that opens the dog up to several health issues. However, not all Blue Nose Pitbulls are unhealthy pups. Actually, with the right level of care, there is a chance you could prevent certain issues from arising.

However, every Blue Nose pitbull dog has a chance of experiencing health problems. This is why it’s important to consider your income before adopting one of these dogs. You will need to make sure you can afford to keep up with the vet bill in order to keep your Blue Nose dog healthy. Another expense you may have to pay for is canine rehab therapy if your dog suffers from hip dysplasia or issues with its hip bone.

While the blue coloring on the grey coat of these pit bulls is beautiful, the defect could cause health issues, especially as the pit bull dog ages. The genetic makeup of the Blue Nose Pitbulls places them at a higher risk of:

Why Exercise is Important For Blue Nose Pitbull Dogs Health

Exercise plays a significant role in a Blue Nose Pitbull’s physical and mental health. As a naturally athletic dog, the Blue Nose dog breed has a lot of energy pent up that it needs to release. So when you make sure your Blue Nose Pit Bull is getting enough exercise, they will be able to stay in their ideal weight range and avoid heart disease. This will also keep its hind legs strong, so it’s not at risk of hip dysplasia or other issues.

Blue Nose Pitbulls have a lot of muscles, but your pooch isn’t a violent dog. Despite the pitbull’s reputation as fighting dogs, they actually don’t make good guard dogs. This is because the Blue Nose Pit Bull is a very playful dog with a lot of energy. It would much rather play with someone who broke into your house than attack them.

In this aspect, the Blue Nose Pit Bull takes after the American Pitbull terrier. Like most terrier dog breeds, the Blue Nose Pitbull loves people. They are at their happiest when they are around people. However, Blue Nose pit bulls need to be properly socialized to be good around other people.

It’s recommended for Blue Nose pitbull puppies to begin the socialization process from day one. This will prevent a behavioral issue from occurring later on and ensure they stay well-behaved around visitors.

Can Blue Nose Pit Bulls Play With Other Dogs?

To keep in mind about Blue Nose Pit Bulls, they are very strong dog breeds that aren’t afraid of a challenge. Therefore, if they feel threatened by another dog, they could cause damage with their strong bite. This is why it’s important that pet parents keep their Blue Nose Pit Bulls on a leash when in public.

Like most pit bulls, if your Blue Nose feels threatened enough, its natural instincts could overpower any training they have had.

The pit bull breed can be extremely loving when with the right pet owners. There are many benefits that these classes have that can help you keep your Blue Nose Pit Bull healthy.

While your dog will learn many commands, one of the main benefits is that it becomes easier to socialize the Blue Pit Bull with other dog breeds.

The Blue Nose Pit Bull can be kept healthy by regular vet visits, a nutritious diet, and plenty of exercise. Unfortunately, blue Pits experience more health problems than other pit bulls and dog breeds because they have a genetic defect.