Back when I first got my Boxers, Janice and Leroy, I had a coffee date with my friend Al. His Hannah, a Saint Bernard, was just in the prime of her life then, and she loved coming over to my house to play with my new puppies. Hannah has since gone to the Rainbow Bridge, and Janice and Leroy have grown up and presented me with a couple of lovely litters, but I still remember that day.

It stands out in my mind because that was the day that Al called me a “cold-hearted piece of work.”

Being the good host that I am, I wouldn’t just offer coffee, so I also put out a plate of my famous home-made peanut butter cookies. Al’s a big guy, so he packed away quite a few of them, and he also slid several to Hannah.

I, on the other hand, ignored the pleading, wide-eyed, puppy begging looks from Janice and Leroy, ate my share of the cookies, and gave them none.

“Ash,” Al said, “How can you do that? Just look at those sweet little faces and those beautiful brown eyes! How can you be such a cold-hearted piece of work?”

“Simple, Al,” I answered while munching on a cookie, “I don’t want them to get into the habit of begging, and it’s a lot easier to stop a puppy from begging when he’s young than to try to correct the habit once he’s older.”

Al just shook his head and fed Hannah another cookie.

Am I Really Cold Hearted?

I don’t think so. One of the most common issues among dog owners is begging at the table, and it’s pretty much the fault of the human, not the dog. What looks so adorable in a 10-week-old Boxer puppy, for instance, becomes a lot less appealing when the dog reaches his full growth, and he’s got his head in your lap, or resting on the tabletop, and there’s drool all over the place.

Dogs don’t understand why, if you thought something was so adorable before, you’ve suddenly done a 180 and decided that the behavior is undesirable. So, from where I’m sitting, allowing your puppy’s begging, but not your adult dog’s begging, is a lot more cold-hearted than simply not allowing a puppy to beg in the first place.

Of course you can, if you have made the mistake of allowing puppy begging, correct the problem of dog begging, but it will probably take a fair bit of time and can lead to confusion and sadness on the part of your dog. It’s really just best not to allow it to begin with.

So, how do you stop your puppy from begging? There are a few things you can do.

This is what I did to cause Al to label me as cold hearted. It sounds horrible, but keep in mind that dogs have a really good understanding of action vs. outcome. If your puppy is sitting beside you at the table, gazing soulfully at you and perhaps whining a bit, and you continue to ignore the behavior, eventually he’ll give it up, simply because it’s not generating the desired outcome. On the other hand, if you let him whine for five minutes, and then give in and pass him a treat, what he’s learned is that in order to get the treat, he has to whine for five minutes.

Similarly, if you steadfastly ignore the staring and whining, but give in when he paws at you, he learns that the action of pawing gets him the outcome that he wants. Again, if there’s no payoff, eventually he’ll give up pawing at you, simply because it’s not doing any good. 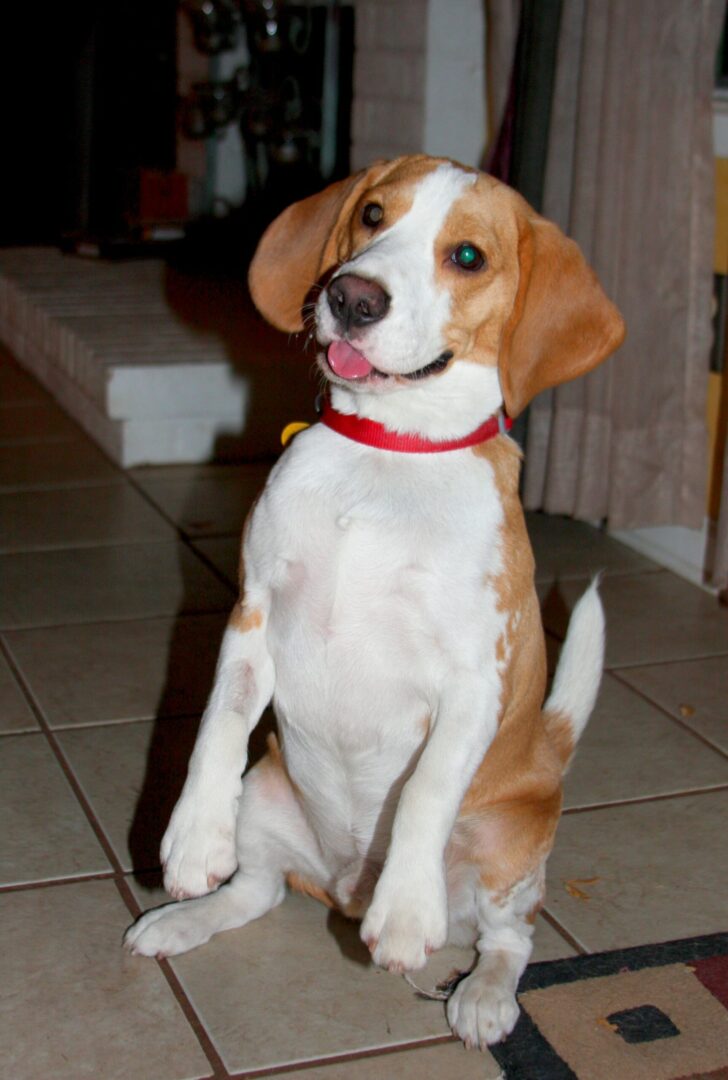 Every single time that you give in, you’re reinforcing behavior that you don’t want. So, if you expect to stop your puppy from begging, you can’t give in. Not even once.

Simply stated, when you’re at the table eating, don’t acknowledge your dog. Don’t feed him. Don’t pet him. Don’t talk to him. Don’t make eye contact. Don’t think that throwing a toy for him will distract him from begging – when you do this, you’re actually just exchanging one form of undesirable behavior for another. You don’t just want to stop your puppy from begging at the table; you also want to discourage him from doing anything that is going to disrupt your enjoyment (or that of your guests) of a meal. In other words, when you’re eating, pretend your dog isn’t even there.

Sure, you’re going to end up being frustrated, but just keep on ignoring your puppy. Please don’t yell at him either – not only is this cruel, it’s still attention of some sort, and can still work to reinforce the very sort of behavior that you’re trying to discourage.

Get the Puppy Away from the Table

If your puppy isn’t at the table, he can’t very well be begging, can he? So, when you’re eating, to begin with you can move the puppy to another room, or put him in his crate. He might still whine or bark, but indisputably, this will stop your puppy from begging.

In conjunction with this, you should work with verbal commands. In other words, say something like “crate” or “bed” when you put him in the crate. Eventually, it will get to the point where your puppy responds to the verbal command by entering the crate, at which point you’ll be able to allow him the run of the house while still being able to rely on the command to get him away from the table.

Teach the “Leave It” Command

This is a very useful command, and one that every dog owner should use. It will do much more than just stop your puppy from begging at the table – it can also be of great value if he picks something up that could harm him.

Give Your Puppy a Time Out

This is a method that’s a bit harsh, and one that I don’t especially like, but it is effective. As soon as your puppy starts begging, put him in another room. Don’t let him have food, treats or toys. The idea here is that you’re putting him in a place that he doesn’t like.

Keep the “time outs” brief, though – no more than five minutes. Then let him out. If he begs again, put him back in.

Make sure that everybody in your home is committed to stopping the puppy from begging. If even one person gives in, then all that the puppy learns is that this the person to go to when he wants to be fed at the table.

If you have family members that are hell-bent on feeding the puppy at the table, point out that it’s very important for a dog’s health that he have a balanced diet. Feeding from the table is only going to lead to weight problems, and possibly other health issues.

If someone does slip up, though, don’t panic. It’s a setback, for sure, since you’ll need to start the training all over again, but it’s not exactly the end of the world.

Don’t Let Your Dog Guilt You

Dogs are masters of the guilt trip. You look at those sad eyes, and you imagine that your dog is trying to say, “I’m starving,” or “Don’t you love me anymore?” or “Al gives Hannah cookies, so he’s nice and you’re mean!”

Your dog is not starving. He knows perfectly well that you love him. And he doesn’t really think you’re mean. So, don’t fall into the guilt trap – stay strong!

Stick with the Program

If you remain consistent, it will probably only take a couple of weeks before your puppy decides that begging simply isn’t worth the effort. After all, there’s no positive outcome. If you backslide, just start again and try to be vigilant this time around.

It’s hard to stop a puppy from begging, simply because they look so darned adorable when they’re doing it. It’s not so cute, though, when you’re dealing with an adult dog. So, no matter how adorable your puppy looks when he’s trying to convince you to feed him from the table, don’t do it. It’s a lot easier to stop the behavior at the puppy stage than it is to correct it once the dog reaches adulthood.

As a footnote, I know that not everyone can be as “cold hearted” as I was. So, if you absolutely can’t resist those puppy eyes, there’s no shame in hiring a professional trainer. If you can’t be assertive when it comes to stopping your puppy from begging, there’s also a good chance that there are also other behavioral issues that you’re not comfortable dealing with. So, don’t try to do what you’re not good at – it will just result in frustration for both you and your puppy. Your veterinarian or groomer can probably recommend an animal behaviorist or trainer that can help with your puppy’s begging and other issues as well.