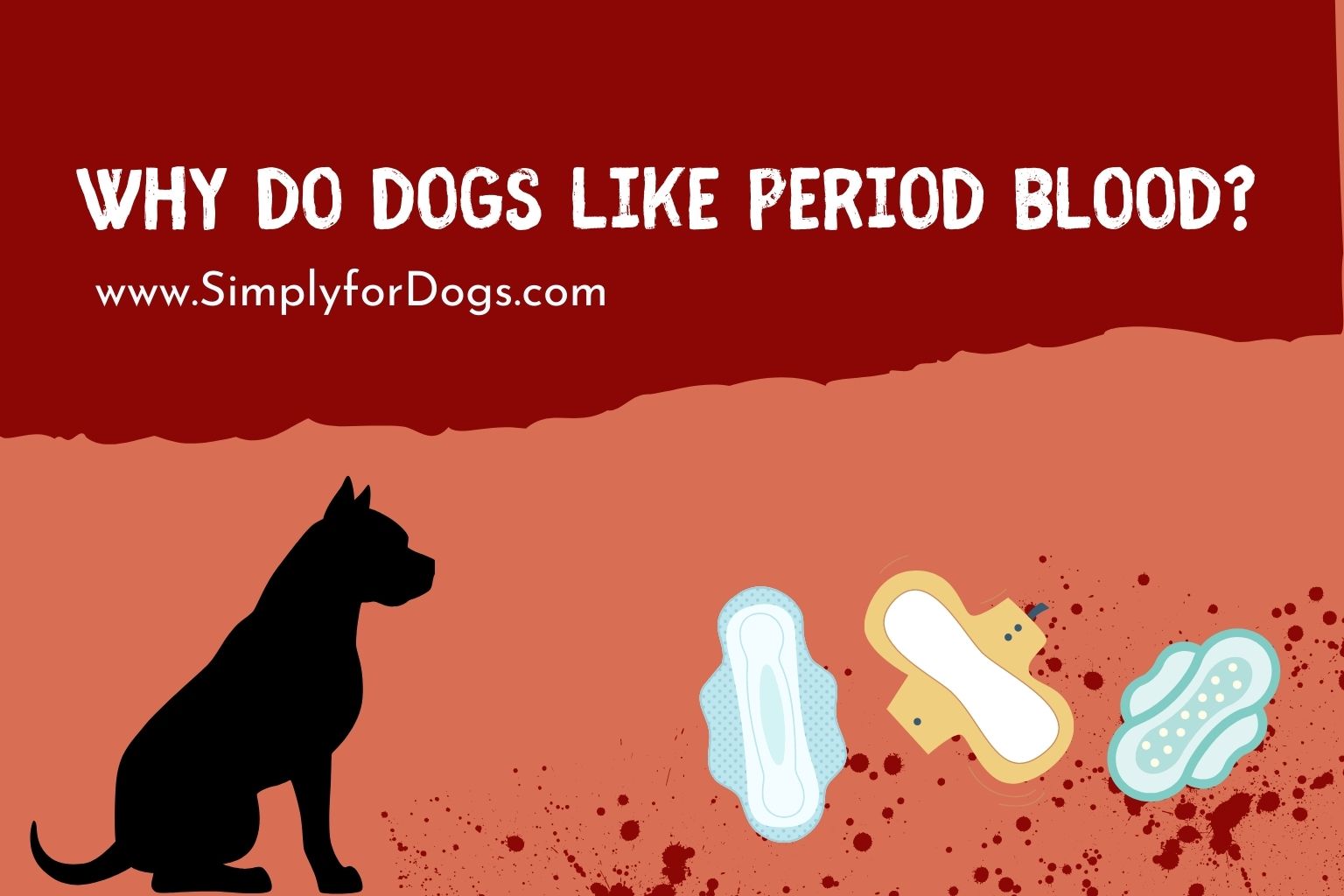 Dogs have a great sense of smell. In fact, a dog’s nose is over 10,000 times stronger than ours! It’s no doubt they’re smelling everything in their environment, and this includes us. Dogs generally tend to pick up on our behavior, so when there’s something off about us, they can tell, especially when that investigation involves their keen sense of smell!

So why are dogs attracted to period blood? Well, dogs can sense when their owner’s scent is off. In particular, dogs are often attracted to any new smell or different smell, and menstruating women can grab their dogs’ attention due to the presence of menstrual blood and increased hormonal levels.

So, can dogs detect menstruation? What else drives them to be opportunistic crotch sniffers? Are there differences between males and females regarding behavior when it comes to period blood? Keep reading to find out!

Why Are Dogs Attracted to Period Blood?

Using their strong sense of smell, dogs can typically detect when human females are menstruating. In addition, dogs are often attracted to unique scents, and they’ll do their best to investigate whenever they encounter something new.

Because female hormones cycle about once per month, female dog owners may notice their dogs smelling them more during their period, as the smell is a new addition to their regular environment.

Dogs aren’t exclusively attracted to period blood, though. Instead, dogs enjoy anything that carries their owner’s scent!

Yes—a dog’s sense of smell is so strong that it can sense human pheromones. Since their nose is their foremost scent, dogs often investigate new people by sniffing them. While this may seem intrusive to us, it’s the primary way dogs communicate with other animals.

Where Do Pheromones Come From?

They are produced and released by glands in your body called apocrine glands. These glands open into your hair follicles and lead to the skin’s surface.

Most apocrine glands are located in the armpits, groin, and scalp in humans. Unlike in dogs, sexual signalling pheromones in humans are rudimentary, though humans do produce more pheromones in their groin.

What Do Pheromones Do?

In many animal species, apocrine glands release pheromones for signalling purposes. These allow your dog to communicate with other dogs, spreading information about social status, emotional and physical state, and sexual status.

This is why you see dogs smelling each other (and their poop) so much!

How Do Dogs Sense Pheromones?

Dogs can pick up a pheromone trail from the environment or directly from another dog. Once they’ve investigated the smell, they interpret it using a special organ called the vomeronasal organ located on the roof of their mouth.

The vomeronasal organ (also called Jacobson’s organ) acts as a “second nose” for dogs and cats. It consists of two fluid-filled sacs connected to the nasal cavity by tiny ducts.

To gain greater access to this organ, you may see your dog lift their upper lip and open their mouth while sniffing—this opens the ducts leading to the organ, allowing your dog to sniff out these messenger chemicals.

Jacobson’s organ contains receptors that interpret pheromones, sending a message to the brain, which results in a behavior response.

How Do Dogs Spread Pheromones?

Dogs release pheromones through glands. Most of these messenger scents end up in saliva, feces, or urine. This is why dogs always sniff these spots on a walk and why they tend to urinate in specific areas—it’s all a part of their communication process!

What Happens if My Dog Licks Human Period Blood?

As nasty as the thought may be, it’s something adult women have to wonder about. While this is gross, it isn’t going to hurt your dog unless they get into your garbage and eat used tampons or pads.

Why Does My Dog Want to Eat Tampons?

Because of the strong odor, dogs will be attracted to used tampons. In addition, the strong smell of period blood often triggers a behavioral response, and some dogs will lick, chew, or eat tampons.

If your dog get into the bathroom garbage and you suspect they may have eaten a tampon, it’s important to have your dog seen by a vet immediately.

Why Is Eating Tampons Dangerous?

Absorbent items such as tampons, pads, and diapers put your dog at an increased risk of blockage in their intestines. For example, once they’ve eaten the tampon, it can continue to absorb fluid and expand in the digestive tract, blocking the movement of food.

In addition to a physical blockage, tampons and period blood are a great breeding ground for bacteria, which can cause very serious infections inside your dog’s body. This is a recipe for disaster combined with the absorption of partially digested food blocking the digestive tract.

What Do I Do if My Dog Eats a Tampon?

If you have just witnessed your dog eat a tampon, your veterinarian can induce vomiting to remove it. Do not try this at home unless under the advice of a medical professional—always consult with a veterinarian before giving your dog anything!

If you aren’t sure when your dog ate the tampon, or you begin to notice your dog eat less, vomit, or become lethargic, take them to the veterinarian as soon as possible.

If the tampon cannot be removed through induced vomiting, your dog may need surgery to remove the blockage. Intestinal blockages can be fatal due to tissue damage and resulting infection, so any time your dog eats a tampon should be considered an emergency.

How Can I Prevent My Dog From Eating Tampons or Pads?

Now that you know how serious intestinal blockages can be, what can you do to prevent your pet from licking or eating tampons during your period?

The easiest step to take is to be sure your dog can’t get to your bathroom garbage! If you’re a woman on your period, keep your bathroom door closed to keep your dog out, or store your garbage can inside a cabinet or under your sink.

If none of those is a viable option for you, there are also pet-proof trash cans you can purchase that your dog won’t be able to open.

If you’re concerned about your dog licking or eating your undergarments, it’s a good idea to keep your laundry in a closed hamper to prevent unwanted behaviors. For example, try a hamper with a latched lid or a zipper!

If you have a dog who likes to lick period blood and you can’t seem to keep them out of the trash, you can dispose of your tampons or pads in sealed plastic bags. The plastic helps to contain the smell, which will make it more difficult for your dog to detect.

There’s no hard and fast scientific concept concluding that male dogs are more attracted to period blood, but there is some anecdotal evidence that this may be the case.

While it hasn’t been objectively answered, Some owners report that males appear to be more attracted to scents and more eager to investigate them than females.

However, this isn’t necessarily exclusive to period blood, and there’s no real reason that one gender would be more of an issue than the other.

Any hunting breed (such as bloodhounds) will likely be more attracted to period blood because they are highly scent-driven.

Why Do Dogs Steal Underwear?

They’ll steal your underwear because they’re attracted to the scent. Humans have more apocrine glands in their groin, so your undergarment carries the strongest scents!

Simply put, dogs like to investigate all kinds of smells, and if a particular clothing item is really smelly, they’ll want it even more!

As mentioned earlier, dogs are also very drawn to their owner’s smell, which is another reason why they like to steal underwear—especially underwear that has been soiled during your period. Of course, it’s a little gross to see them licking it, but it’s how they’re learning more about you!

Why Do Dogs Sniff Your Crotch?

Like the previous answer, they sniff your crotch because it’s full of scent glands, and dogs are curious to learn as much as they can about you through your sense of smell. During your period, you’ll be giving off an even stronger scent!

This is why you see dogs sniff more when they meet someone new—their crotch is full of information they need to know! However, they don’t realize that humans think this is rude, so give them a little break.

If you do need to get your dog to stop sniffing new people in inappropriate places, you can distract them with a loud noise (like a clap or sudden call) or get them trained with focus commands to grab their attention during awkward encounters. Of course, bribing them away with a treat may also work wonders!

Why Do Dogs Sniff Others’ Butts?

Dogs are always curious about other dogs, and smelling and signalling is their primary method of communication.

One dog can learn a lot about another through smell, so they go for the butt to get all the information they need!

As a woman, you may be wondering if your female dog experiences the same things you do. Intact female adults (females who have not been spayed) go through heat cycles approximately twice a year.

These cycles last for around 18 days. However, a cycle’s exact frequency and duration depends on the individual, considering her size, breed, and age. For example, large dogs may cycle less frequently.

While in a heat cycle, females can bleed for about a week. You may see her licking the discharge to clean herself during this time—this is okay! However, many owners opt to give their females in heat a little doggy diaper to keep their homes clean.

How Can I Tell if a Female Is in Heat?

If you want to determine whether your intact female is in heat, there are several telltale signs to look for:

If you notice these signs, her female hormones are running wild! So if you don’t want puppies in the future, it’s imperative to keep her away from other dogs, especially males.

How Can I Keep a Male Dog Away From a Female Dog in Heat?

A female in heat can attract a male dog over long distances. Therefore, if you have an intact male and female in the same home, you’ll want to put as much distance between them as possible, as the male can’t control his behavior around female dogs in heat.

Use physical separation to keep males and females separated. Kennels or separate rooms work for this purpose. You should keep these areas as far apart as you can, as the distance will help reduce their agitation.

If space is limited and the weather allows, one can be kept outside while the other stays in. If you simply don’t have enough room, you can even board your male dog while the female stays at home to finish her cycle.

Again, physical separation is imperative to keep the dogs apart! If you only supervise them, they will find a way to mate.

If you have a female in heat, do not let her out unsupervised—males will go to almost any length to get to her if they can smell her!

If you’re a woman on her period, pets may treat you a bit differently because of their keen sense of smell. So don’t feel offended if your dog sniffs you excessively—they can’t help it! Investigating by smell is a natural behavior for them.

However, there are certain times when this behavior should be discouraged. For example, keep your used hygiene products away from your pet to prevent blockages, and bring a treat or two along when meeting new people to distract from over-sniffing.