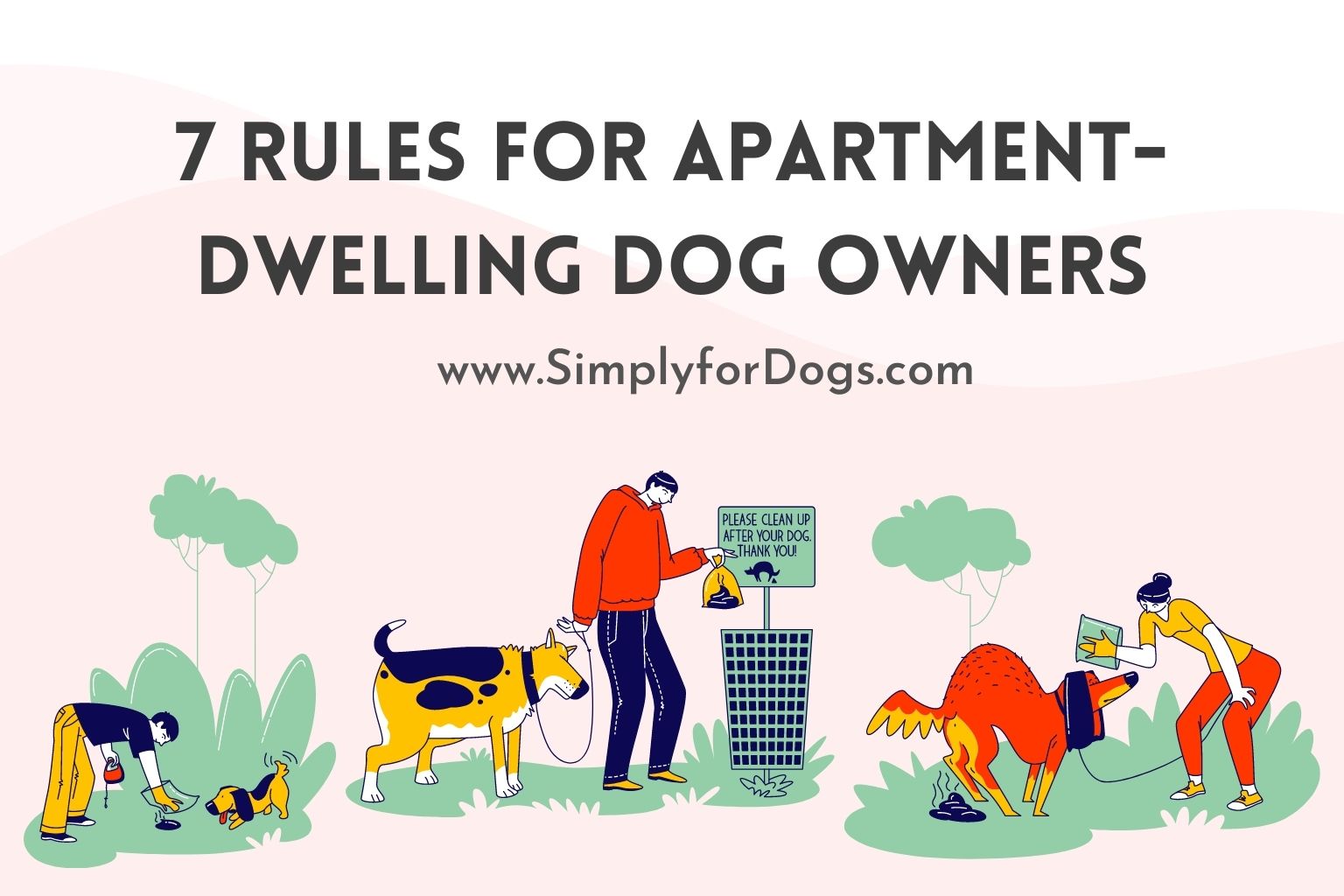 A while back, in Apartment Dwelling Dogs, I talked about some of the best dog breeds for people living in apartments, and briefly touched on a few basic rules of etiquette that any dog owner who occupies an apartment should observe if they want to live peacefully with their neighbors. This time around, I want to go into a bit more detail about what it takes to co-exist with other dog owners and non-dog people as well.

I’ve lived in apartments, but never with a dog. My companion during my apartment days was a cat, Bruce. I told you about him in Dog People and Cat People – They Really Are Different. I wouldn’t say that my preference has ever been for cats (although I was very partial to Bruce) – it was more like my living quarters were small, and I’ve always preferred large dogs. There just wouldn’t have been enough “rattling about” room for anyone.

In addition to not being much of a cat person, albeit with the one exception, I’ve also never been much of one for apartment living. Where I live now, I know all my neighbors (and their dogs, too!), but when I was an apartment dweller, there were times when I could go for years and not even meet my next door neighbor. Then there was the matter of being at the mercy of the landlord if anything needed to be done, fighting for a parking space, lugging laundry down to a dingy basement and trying to find a washer and dryer that actually worked – well, suffice it to say that I’m very happy to be the owner of a modest little house where Janice and Leroy and I can coexist comfortably.

But I’m digressing, so let me get back on track. There are certain rules that normal, civilized dog owners should learn and abide by if they want to get along with the neighbors in their apartment building. Here they are

I remember one apartment building that I lived in where my upstairs neighbor (whose name I never learned but who I’d see once in a while entering and leaving the building) had a Pomeranian that I swear never shut up. Day and night, 24/7, it was “yapyapyapyapyap.” I nearly went out of my mind. I tried to talk with her about it one day when I encountered her at the mailboxes. “Hi,” I said, “My name is Ash, and I live downstairs from you. Your dog seems to be doing a lot of barking. Is he all right?” Kind of trying to take a gentle approach, you see.

That went well, not. The point I am coming around to in my circuitous fashion is this – a responsible, courteous dog owner should deal with barking issues. If your dog is a problem barker and annoying your neighbors, find out why he’s barking. Is he not getting enough exercise? Sometimes a walk before you go to work and another when you get home can alleviate the problem. If you’re really pressed for time, you could hire a dog walker, or maybe even recruit a dog-loving kid in your building who would like nothing more than to spend time before and after school with your dog. One thing you should never do is allow the problem to persist. If you do, you’re a bad neighbor, plain and simple.

This is kind of like “Deal With Excessive Barking, Part 2,” because much of the time if your dog is agonizing because you’re not around, he’ll bark and whine all day long. He might also do damage to the apartment, and that’s not going to win you any points with your landlord.

If separation anxiety is a problem, you might very well have to consult an animal behaviorist who can evaluate your dog and recommend a course of action – either that or investigate the possibility of working from home or taking your dog to work with you. If nothing else works, your veterinarian may be able to prescribe an anti-anxiety medication. I’m not exactly a huge fan of “puppies on Prozac,” but if the situation is causing distress to your neighbors, or getting you in trouble with a landlord whose approach is not “If you don’t like it, move,” then it might be the only thing you can do to preserve harmony.

3. Don’t Let Your Dog Be Bored

A bored dog is a barky dog. Or a destructive dog. Again, it’s just not courteous to allow your dog to annoy the neighbors or destroy your landlord’s property. So make sure your dog has plenty to do in order to stay entertained.

If you’re a stay-at-home dog parent, this is pretty easy – just play with him or take him for a walk. If you’re like most people, and have to leave your apartment to go out and earn a living, then make sure he has plenty of food and water to get him through the day, and toys too. Fill up Kong toys with peanut butter or yogurt and then freeze them. Your dog will have to do a bit of work to get at the food, and because it’s frozen, he’s not going to chow down all at once.

Some dog owners also leave the television or radio on at a low volume to soothe the dog when they’re away. The main thing is to make sure that you have a happy, entertained dog so that he doesn’t become the scourge of the building with constant barking or destructiveness.

Thinking back to another apartment building I occupied, I’m reminded of a fellow tenant who had a Chocolate Lab with a huge attitude. I know, not a breed that we typically credit with aggressiveness, right? But this one was a menace. If you met him in the elevator, he’d corner you and snarl while his owner pulled on his leash and offered up entreaties like “Bobo, be nice!” Bobo was not nice and he should not have been permitted to occupy the elevator with anyone other than his owner.

I don’t know what Bobo’s problem was, but often, aggression is a manifestation of fear. So if your dog is fearful, don’t allow him to occupy close quarters with other people or animals. Just take the stairs, or wait for the next elevator ride. You could also try some positive reinforcement, rewarding your dog with a treat when he remains calm. If you know anyone in your building, and they’re not nervous around dogs, you might recruit them to help you out with that. What you absolutely can’t do is allow your dog to frighten the neighbors – it’s just not polite on any level.

Now, the flip side of that coin is that you might have a dog who is just beyond friendly, and prone to jump on people. If that’s the case, just offer a friendly smile, hold your dog back and explain that you need to do a bit of training before he’s polite enough to meet people. You might need to use a treat to get your dog past the person who would probably prefer not to be jumped on.

I probably shouldn’t admit this, since I’m always going on about making sure your dog is properly behaved, but I just love it when dogs jump on me! I do know that it’s bad behavior, though, and that most people don’t appreciate it. So Janice and Leroy know that it’s okay to jump up on me, but that they can’t do it with anyone

6. Exercise Regularly No Matter What

I know how hard it is to get enthusiastic about “going walkies” when it’s pounding down rain or a snowstorm is brewing, but again, a dog that doesn’t get enough exercise is going to be bored, and that’s going to lead to barking and destructiveness. So put on your boots, get your umbrella and get out there. There’s no use putting it off, and besides, just think how great a hot shower and a steaming cup of hot chocolate will be when you get back.

If you don’t exercise your dog regularly, you’re going to have a very unhappy dog and most likely also unhappy neighbors. So it has to be done.

Now, I’ve heard of a few creative people using the hallway in their apartment building to toss a ball or Frisbee to their dog, and yes, that can be an alternative to outdoor exercise. But here’s the thing – if you want to do that, then it’s only polite to ask your neighbors if it’s okay with them. And yes, I do mean every single one of them. If you get even the slightest hint of disapproval, back off. Some people will agree to just about anything no matter how much it annoys them rather than seem rude, and if you proceed in the face of obvious discomfort on the part of a neighbor, then you’re the one being rude.

I shouldn’t even have to say this, but if your dog does his thing in common areas like the parking lot or grounds, clean it up. Every time. And if he has an accident in the hallway, foyer or elevator, go a step further and clean up with an enzyme solution so other dogs don’t get a whiff and thank that these are good places to go potty.

These are the rules. Write them down. Print them off and stick them on your fridge. Memorize them.

Really, this all boils down to simple courtesy and consideration. And if you think about it, we should always treat our neighbors with courtesy even if dogs aren’t part of the equation. You know how when you’re going to have a party, and you think things might get a bit noisy, you at least let your neighbors know that you’ll be entertaining? Or you invite them to come on over and join in? Well, it’s the same thing when you have a dog – think about what’s going on around you, and if you’re not at home all day long, make it a point to ask your neighbors if your dog has been barking. Some people will just put up with the annoyance while silently hating you, so if you don’t ask, you’re never going to know.

You also have to treat your dog considerately. You wouldn’t leave a child unattended all day with nothing to do, so don’t do it to your dog.

Finally, much as I hate to say this, because I really don’t understand people who don’t like dogs, if you’re living in an apartment building, you’re going to be sharing common space with a variety of different people. Some may not be all that fond of dogs. If it’s a matter of just not being familiar with dogs, then by all means try to arrange an introduction so that your neighbor can get to know your dog. If your efforts are greeted with displeasure, though, back off. I don’t much like children, with the possible exception of my nephew, Owen, and I really resent it when people try to force their sprog on me. Unfortunately, there may be people in your building who feel that way about dogs.

There can always be problems when people are living close together. But if you follow these seven rules, the way your neighbors feel about your dog shouldn’t be one of them.