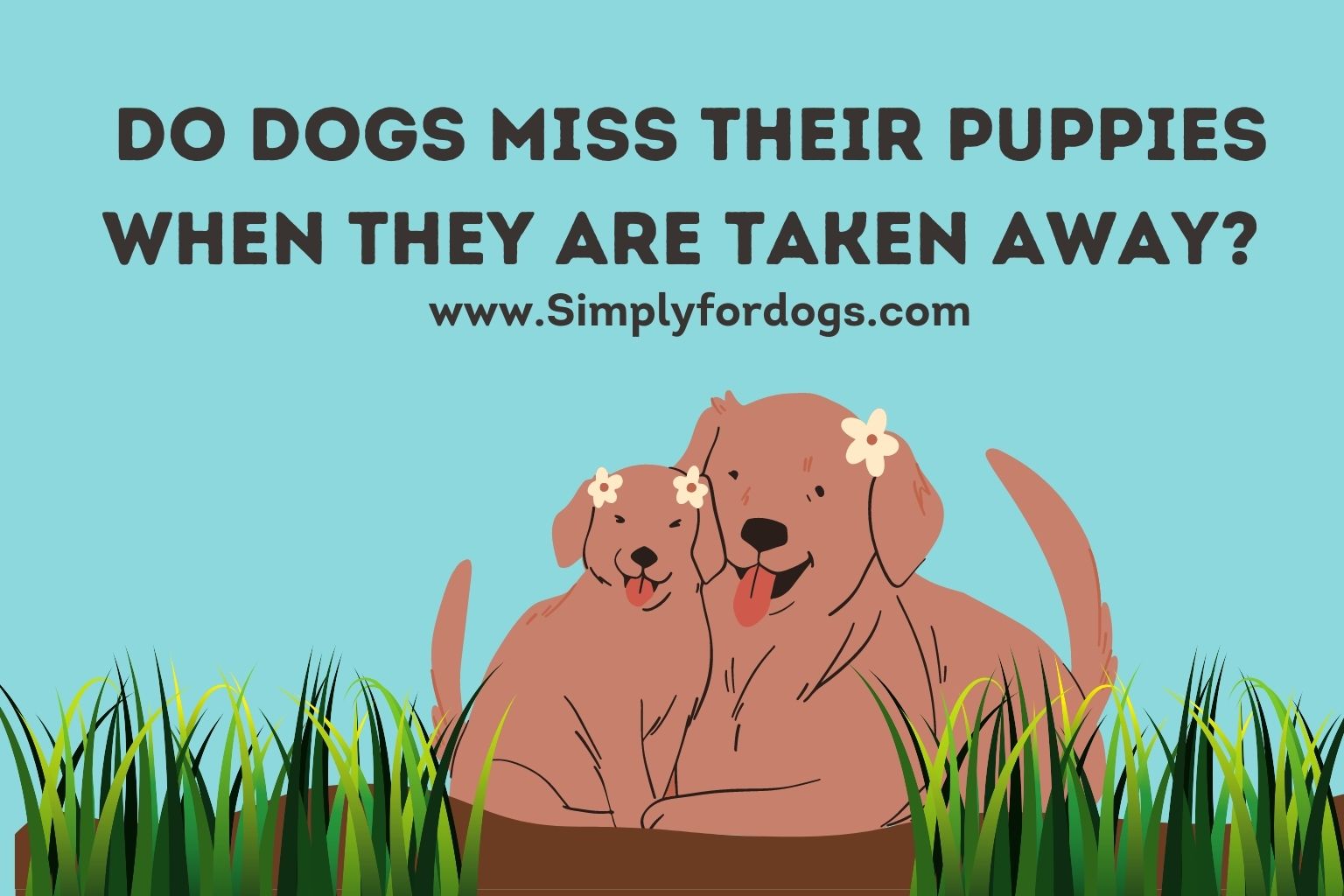 Many people believe that dogs miss their puppies when they are taken away. This is mainly because dogs are very attached to their young and are known to be very protective of them. It is common for dogs to become visibly upset when separated from their pup and will often vocalize their sadness by whining or barking. Some dog owners report that their pets will refuse to eat or sleep in the same bed as them when their puppies are no longer around.

But, the truth is, dogs, especially female dogs, will grieve for their puppies even if their puppies are taken away too earlier. This is because the bond between a mother and her child is instinctual and very powerful. So, while we can’t say for certain that puppies miss their puppies after they are gone, it is safe to assume that they do indeed feel some sense of loss.

Are Puppies Miss Their Mom When Taken Away?

Puppies usually miss their mother when they are taken away. This is because they are used to being around her and rely on her for solid food and care. Puppies taken away from their mom too early may also have trouble adjusting to their new surroundings.

However, some dogs with motherly instinct will not show signs of missing their mother as they will take on the role of being a female to the puppies.

Do Mother Dogs Miss Their Puppies?

In fact, many researchers have even observed a mother dog going into a deep depression after her puppies have been taken away from her. This is likely due to the sudden loss of the strong emotional bond that she shared with her puppies. Therefore, if you are planning on taking a puppy away from its mother dog, it is important to do so gradually in order to give the mother time to adjust.

Do Dogs Know When Their Puppies Are Taken?

A study in 2013 about Animal Cognition has shown that dogs have long-term memory and can recognize things for longer periods. So the short answer is yes, they know when their puppies are taken. And they will search for them if you remove puppies.

In most circumstances, the researchers found that the puppies whimpered more and made fewer attempts to find their way back to their mother than when she was present. These results concluded that dogs could recognize things for a long time, even if they were only exposed to them once.

It’s not just a mother dogs love; the vast majority of dogs form close bonds with their offspring and can get upset when they’re separated. In one study, dogs showed signs of stress, such as increased heart rate and cortisol levels, when they were separated from their puppies. This suggests that dogs are aware of the strong bonds they share with their young and experience stress when those bonds are broken.

So, based on the research, it seems that dogs are well aware when their puppies are taken from them. They form strong bonds with their young and experience stress when those bonds are broken. If you’re considering taking a dog from its mother, be prepared for some search-and-rescue efforts on her part.

How Long Does It Take a Puppy to Forget Its Mom?

There is no definitive answer to this question as it depends on a variety of factors, such as the breed of puppy, the right age of the dog when separated from its mother, and the environment in which the puppy is raised. However, studies have shown that It takes a puppy about eight weeks to forget its mom. So, if you are thinking about getting a puppy, be prepared to commit to at least 8 weeks of care and training.

This will give your puppy time to get used to its new home and family and to bond with you. Many breeders are typically weaned from their mother starts that could be around six to eight weeks of age, so this is also when they leave their littermates and learn to be independent. If you adopt a dog that is older than 8 weeks, it may take longer for the dog to bond with you and forget its mother, but it is still possible. Your new dog will soon be a part of your family with patience and love.

Do Dogs Recognize Their Siblings After Being Separated?

It depends on the dog. If they were raised together and spent a lot of time together from birth, chances are they will remember each other. However, if they were only together for a short time or were not socialized often, they may not recognize each other. Separation can also cause dogs to forget each other if they are not used to it.

Do Female Dogs Remember Their Puppies After They Are Grown?

Yes, mother dogs typically remember their puppies even after full-grown from giving birth to the weaning process. They will often recognize their offspring by their scent and may even show signs of maternal instinct when they see them again. However, it is important to note that not all mother dogs will react the same way to seeing their grown puppies again.

They may not remember every single one of their offspring, but they will certainly remember the ones that made a lasting impression on them. Whether it was good or bad, mothers usually never forget their puppies.

What Is the Best Way to Help a Puppy Forget Its Mother?

There is no one-size-fits-all answer to this question, as every puppy is different and will respond differently to various approaches. However, some household methods that may help a dog forget its mother include:

– Socializing the one puppy with other puppies and humans as much as possible. This will help the dog bond with others and feel comfortable in its re-homing.

– A happy dog can distract easily. So, providing the puppy with plenty of toys, chew toys, and other enrichment forms keeps it occupied and distracted.

– Spend time training the puppy with positive reinforcement methods such as clicker training. This will help the puppy learn that good things happen when listening to you and responding positively.

– Keeping a consistent routine for the dog in terms of feeding, walking, and sleeping. This will help the puppy feel secure and comfortable in its new home from some weeks onwards.

– Avoid punishment or negative reinforcement when the dog does something wrong. This will only make the puppy more anxious and less likely to bond with you.

If you are patient and consistent, there is a good chance that your dog will forget its mother and bond with you instead. If dog owners gradually take the steps, it’ll take some trial and error to find what works best for their pup. If these methods don’t work, then you should go for veterinary advice.

No, domestic pups do not remember their wild ancestors. However, they may have some instinctual behaviors that are remnants of their wild past. In a journal, hepper reported that long-term retention kinship recognition is established during adulthood in domestic dogs.

While they may not remember their wild ancestors specifically, they still have many of the same instincts and behaviors. This is why providing them with outlets for those instincts, such as toys to chew on or a place to dig in the yard is important.

Does the Mother Dog More Connect to the Connected Healthy Dogs?

There is no one answer to this question, as every dog is different. However, it is generally thought that mother dogs have a long-term relationship with other healthy dogs than they are too unhealthy dogs. This may be because mother dogs are instinctively drawn to other healthy animals, which can help them raise their puppies in a healthy environment.

On the other hand, unhealthy dogs may not be able to provide the same level of care for their pups. This can lead to a number of physical and behavioral problems, such as malnutrition or disease. As such, mother dogs may avoid unhealthy dogs in order to keep their puppies safe.

While there is no definitive answer, it seems that the mother dog is more likely to be connected with other healthy puppies. This instinctual behavior helps to ensure that their puppies are raised in a safe and healthy environment.

Do Same Household Family Members’ Dogs Remember Each Other?

There is no one answer to this question, as every dog is different. However, removing puppies from the same breed or litter can increase their chance of remembering each other. This is because puppies who are raised together form strong bonds with one another.

These bonds can last a lifetime, even if a pup is separated and lives in different households. As such, it is not uncommon for dogs to remember other dogs that they were raised with, even if they haven’t seen them in years.

Do Puppies Die Without Their Mother?

While puppies can survive without their mother, it is not likely. If a dog is orphaned, it is important to get it to a safe place as soon as possible, or you should provide veterinary advice.

5 Things to Know About the Fun and Frustration of a New Puppy
9 Things Your Dog Wants You to Know
When You Lose a Dog, Why Does It Hurt So Much?